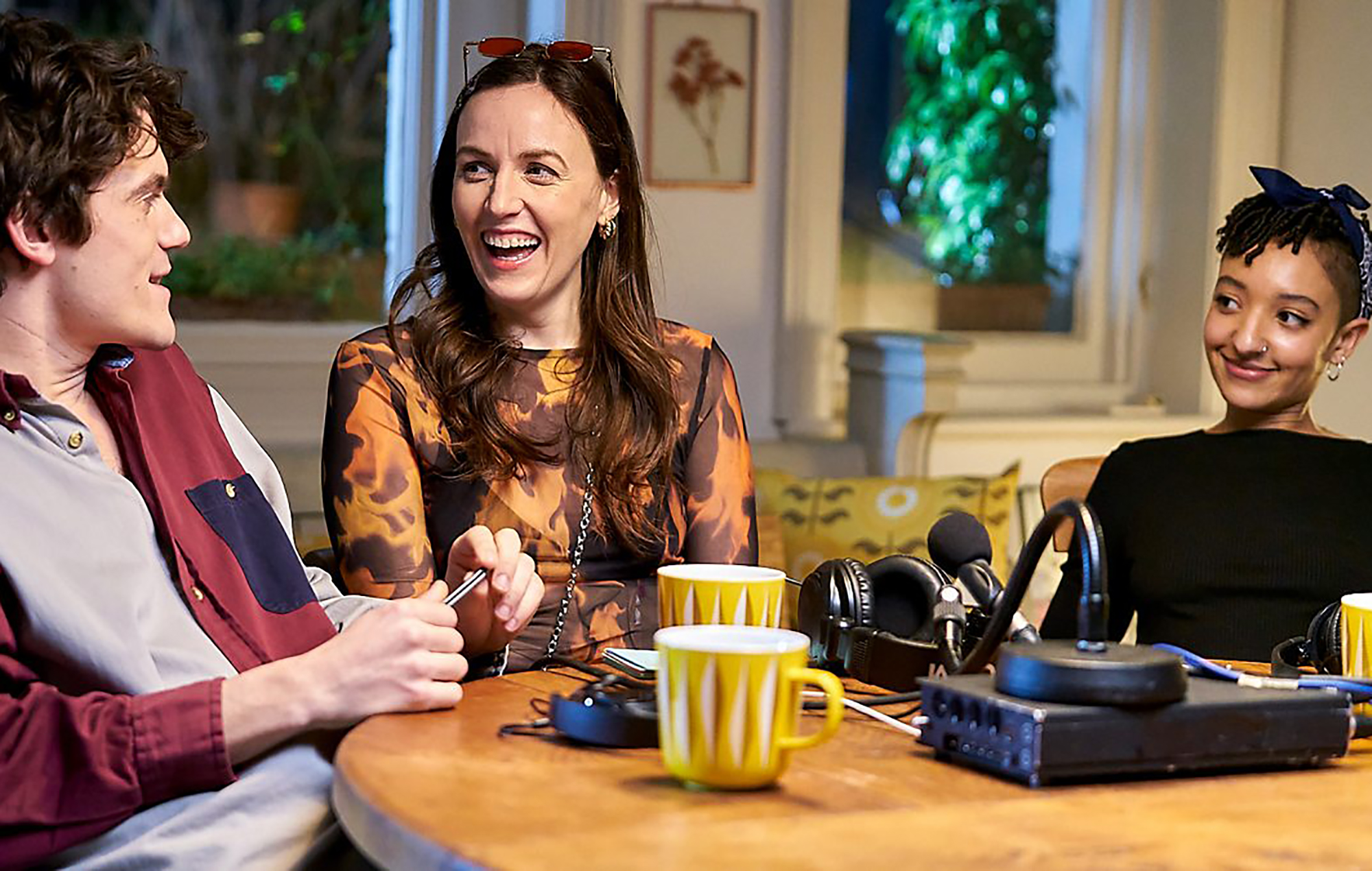 As lockdown rules change, one thing remains crucial: whatever you do, you probably don’t need to start that podcast. Particularly if you happen to be a white feminist. A new BBC Three comedy by Phoebe Walsh, Behind the Filter, frames what happens, in just 15 minutes, when such a character – often painfully present online – actually does follow her dreams.

Walsh plays Ruby, a young white woman who wakes up murmuring “Phoebe Waller-Bridge” in her sleep. She decides to make a change. Instead of getting a job, as her parents suggest, she starts a pod: Feminism In Your Ears.

With the help of activist Charlotte (Patricia Allison) and, er, a boy she finds attractive called Barney (Edward Bluemel), Ruby takes matters – from homophobia to racism, all the issues she probably shouldn’t be making about her – into her own hands by talking. What could go wrong?

We caught up with Walsh and Allison to hear why such a comedy could be just the education we all need.

The upbeat comedy poking fun at Ruby came from Walsh’s own frustration at what she was seeing on social media. “From things that irk me if I go on Twitter,” she says. “There will alway be people I don’t have the same sensibility with. It felt quite cathartic to turn it into something positive.”

Jokes about Madeleine McCann and Syrian refugees in the same breath: Walsh is playing a risky game. And she certainly acknowledges there was a worry about going too far. “I’m still worried!” she says. “But I think you have to make it clear that it’s a character, and we’re making fun of her and her white feminism and her ignorance and her stupidity, and it’s not making fun of anything else.”

Allison adds how such daring comedy feels fresh. “It’s critiquing what we should be talking about, how we should be talking about what’s fuelling the conversation – and what isn’t,” she says. But there are good intentions too: “They’re all trying to be the best version of themselves, but everyone is still a dick in their own way! Part of the conversation about feminism is that maybe we haven’t necessarily always got it right, and it’s always a conversation that we need to pick up.”

Hi! Behind The Filter pilot is out on @bbcthree would love you to watch! x https://t.co/J8GbNHS1hQ pic.twitter.com/yTEOj62GiR

Awkward, physical comedy, paired with 100mph dialogue? David Brent would certainly have something to say about this. Walsh openly accepts the comparison with The Office: “I’ve just been rewatching it and it’s the only thing that makes me happy!”

Allison adds that it shares a similar British trait, too. “Phoebe can talk very quickly, like Ricky Gervais, and be very awkward. It’s so typically British – you don’t want to be rude, so you have to be polite and you’re doing something you really don’t want to be doing.”

It’s a new kind of comedy with a female lead

In the age of Fleabag, Walsh set out to do something different – no dramedy tropes here, making people laugh is the most important thing. “We wanted to make an outright comedy with a female lead for a new generation, rather than it being angsty, or with anyone you’d really identify with,” Walsh explains. “It’s more like, ‘Who is this fucking idiot?’, like David Brent, or Alan Partridge, rather than thinking, ‘Oh god, I hope she gets with the Priest…’”

The main function of Behind the Filter is to give the world, during a global pandemic, what it needs. “I’d hope [people] laugh,” Walsh says. “That’s what we need to do right now.” But there is still a strongly-worded warning, coded in the comedy: “Ruby is also a warning against not being self-aware. She does lots of things that I’ve seen people do.”

But it’s not just Ruby. What might the cool activist, Charlotte, be doing if she was in lockdown now? “Definitely starting a podcast,” says Allison. “She might be getting a DJ app too, playing music really loudly on Instagram Live thinking she’s really cool becoming a DJ. She wouldn’t be a great one!”

‘Behind The Filter’ is streaming on YouTube and BBC iPlayer now

The post ‘Behind The Filter’: an awkward podcast comedy for fans of ‘The Office’ appeared first on NME Music News, Reviews, Videos, Galleries, Tickets and Blogs | NME.COM.