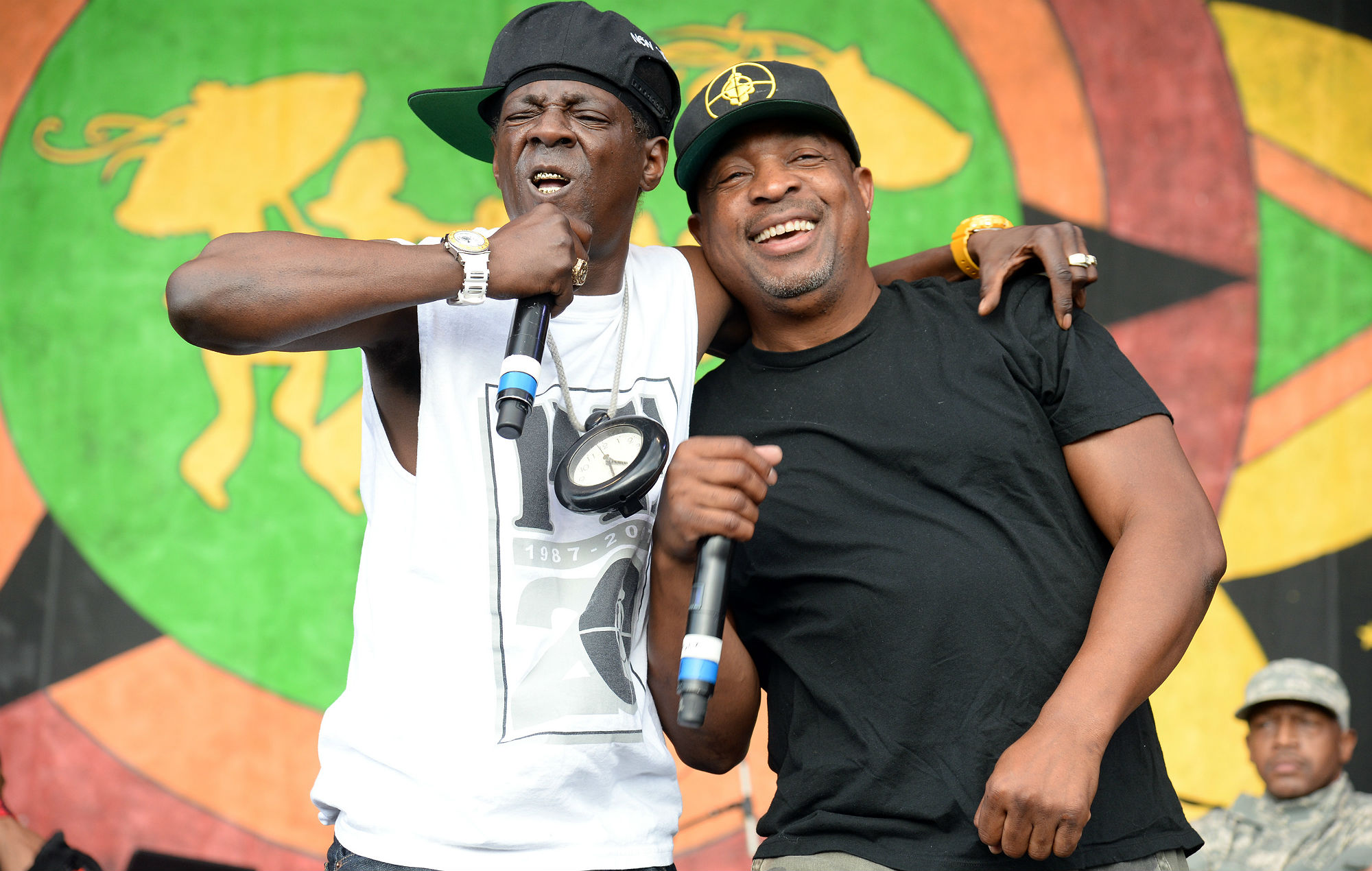 “They aren’t being charged?” asks Chuck D, frustration ringing in his voice. It’s early on Wednesday afternoon in California, where the 60 year-old Public Enemy frontman has been doing back-to-back phone interviews since 7am about their new album ‘What You Gonna Do When The Grid Goes Down?’. That means he hasn’t yet heard the news from Kentucky that the Louisville police officers who killed Breonna Taylor in her home will not face any charges related to her death.

When I clarify that the only charges being brought are for a single officer firing his gun recklessly into other people’s apartments, the frustration in Chuck’s deep, sonorous voice gives way to fury. “Of course, of course,” he spits. “It’s obvious. It’s dumb fucking police stupidity. They’ve failed to man or woman up and say: ‘Damn, our fucking mistake.’ ‘Our bad.’ ‘Our tragedy.’ We’ve got to reform this ridiculousness of police just fucking firing off at the handle at every jump of the nerve.”

It feels almost trite to say that the return of Public Enemy is timely, but you’re certainly not alone if you’ve been turning or returning to their incendiary music to help make sense of the world in 2020. Earlier this year, The Roots’ drummer and producer Questlove approached Chuck about remixing PE’s classic 1989 protest anthem ‘Fight The Power’ to open June’s BET Awards, drafting in new verses from Nas, YG, Rapsody, Jahi and Black Thought.

“You still attack the ills and the -isms with the same vigour, but you can’t say: ‘Damn, didn’t we do this before?’”

On the new version, both Rapsody and Jahi rap about the fight to deliver some semblance of justice in Breonna Taylor’s name. For Chuck, it’s no surprise that the track still resonates three decades on. “It’s a long time in culture, but a short time in real life,” he points out. “Since ‘Fight The Power’ first came out in ‘89, a lot of people have been born and a lot of people have died. You still attack the ills and the -isms with the same vigour, but you can’t say: ‘Damn, didn’t we do this before?’ The way I look at it is there are people that haven’t gone through this at all, so why not bring some of the things we’ve done before back in a new language? It’s a long life.”

Speaking of attacking society’s ills with the same vigour, ‘Fight The Power: Remix 2020’ is joined as a single from the new record by ‘State of the Union (STFU)’, a blunt and direct attack on Donald Trump that Chuck put together with collaborator DJ Premier in under 48 hours – a neat illustration of the urgency with which its message is delivered. “When it comes to Donald Trump, we simply say: ‘It’s the side that you’re on versus the side that hate you.’” explains Chuck. “When they say that you don’t matter, that your lives don’t matter, that’s hatred.”

With just 40 days to go before America decides whether Trump will be granted another term as President, the wider question that’s been troubling Chuck concerns the nefarious influence the overarching reach of modern technology is having on society – and the impact it will have on this election. “What this album does is ask the simple question: ‘What are you going to do when the grid goes down?’” says Chuck. “We wanted to use our platform to ask a pertinent question that people seriously have to contemplate, especially going into these 40 days in the United States. Are you prepared for the tricks that governments play? It’s not a period to be asleep. You’ve got to be woke, no matter what comes into play.”

On the album’s standout track ‘GRID’, Chuck plays out what would happen to our addict society if the internet were to suddenly disappear. “No internet, no text and no tweets,” he raps. “Will look like the ’80s with fiends in the streets.” It’s a track that will resonate with anyone who was inspired to rethink their social media use by Jeff Orlowski’s recent hit Netflix documentary The Social Dilemma. While Chuck sees benefits to this alternate reality (“No apps, just maybe perhaps/No GRID is what we need for new human contact”) he’s also sees the dangers (“More police brutality but no posts on who filmed it”). As he puts it, the difference is in our hands. “With gadgets the challenge is for the beholder,” he says. “Is it a toy or is a tool? It’s like a car. You can use it for transport, or you can use it to do figure eights in the parking lot. Prince said it best: ‘If you don’t manage technology, it will master you.’”

Both ‘GRID’ and the opening spoken-word title track feature George Clinton, the legendary P-Funk innovator whose records with Parliament and Funkadelic were foundational as samples on early hip-hop tracks. (They were sampled at least twice by Public Enemy themselves: ‘911 Is A Joke’ uses the horns from Parliament’s ‘Flash Light’ , while ‘Bring The Noise’ is built around a sample from Funkadelic’s ‘Get Off Your Ass And Jam’). For this record, Chuck says he was more interested in Clinton’s perspective than his beats.

“People usually reach out to Uncle George for the funk, but I reached out to him for his funk-osophy,” he explains. “George Clinton’s funk-osophy is very important to me because if you check out those Parliament and Funkadelic records they were always predicting a vision of the future. They were visionary in the way they thought about the world and where it was going, they just funk-ified their explanation.”

The record’s most overt callback to hip-hop’s golden age comes on the joyous ‘Public Enemy Number Won’. The track sees the Beastie Boys’ Mike D and Ad Rock, Run DMC and Terminator X join forces to rework PE’s similarly named 1987 breakthrough single as a sort of oral history of their early years at Def Jam. Chuck turned 60 in August, and rather sweetly reveals the guest appearances were his birthday wish. “I told them this would be the greatest 60th birthday present ever,” he says. “I was totally blown away by Run’s enthusiasm, and Mike D and Ad Rock really came through and showed love. It was a utopian moment for me. That song ‘Public Enemy Number Won’ is me paying homage to the guys that dragged me in to Def Jam because of that song [‘Public Enemy No. 1’].

“Rick Rubin wanted me at Def Jam in 1984-85. I rejected that. He thought I was a key piece, along with signing the Beastie Boys, LL Cool J and Original Concept. He pursued me and pursued me because of that song, which the Beastie Boys and Run DMC played to death. I kept saying no until I was ready with my crew. The reason that album was called ‘Yo! Bum Rush the Show’ is because once they opened the door for me, I let all my boys in. That’s called the bum rush.”

It’s fitting then that ‘What You Gonna Do When The Grid Goes Down?’ is Public Enemy’s first album on Def Jam since 1998’s ‘He Got Game’. When their return to the label was first announced, Chuck put out a statement saying: “Cultural Institutions are important. Being an integral part of one is an honor bestowed and to uphold,” although today he adds that it was also a good move as far as inter-band politics go with the ever mercurial Flavor Flav.

“It’s a good settlement between me and Flavor!” chuckles Chuck. “We’ve released tonnes of Public Enemy albums independently, but Flavor thought that you’re the biggest star when you have a major release. We went back and forth on it, and then Def Jam was there, so I said: ‘Well, this is a good compromise.’ Def Jam. Why not? Def Jam asked me to bring them that record to in 84-85, and now Def Jam are saying it’s cool if you guys come back in 2020! You’d have to be a fool to fight that.”

Chuck, of course, is a man who is noted for being an iconoclast in the truest sense. This is a man, after all, who once declared: “Elvis was a hero to most / But he never meant shit to me,” before adding the timeless coda: “Mother fuck him and John Wayne.” Still, my ears pricked up on chest-pounding new track ‘Toxic’ when Chuck casually mentions he “never really dug The Wire.” What exactly does he have against David Simon’s critically-adored cultural behemoth? “Well, I hated Baltimore when I was growing up,” he explains. “I’d visit with family and the area I had to go through was depressing. I thought the TV show made light of a time that I didn’t dig. I don’t know what they pull out of white people when they show shows like that. It ain’t us at our best, and I don’t know whether somebody feeling sorry for it makes that shit better?”

“We’ve got to reform this ridiculousness of police just fucking firing off at the handle at every jump of the nerve.”

For all its typically bombastic PE bravado, ‘What You Gonna Do When The Grid Goes Down?’ also captures the group’s contemplative side. Towards the end of the record, Flavor Flav pays tribute to a close friend of his, the graphic artist Clyde Bazile Jr., on ‘RIP Blackat’. The album also includes a reworked version of 2017 track ‘Rest In Beats’ as a tribute to one of its writers, The Impossebulls’ Marcus J Gilligan. “The album ends on two somber notes, which kind of tells our ages and the seriousness of the passage of time,” says Chuck. “This is different from ‘Dead Homies’, where Ice Cube was questioning the ridiculousness of losing his homies at an early age. This is us coming to the realisation that time waits for no one, and it will snatch people in your midst. Slowly, surely and definitely, time will hold up the God mirror to everybody.”

As if to further illustrate his point, this is the first time Chuck is talking to NME since we learned of the death of Dele Fadele, the groundbreaking NME writer who Chuck remembers as the first Black British journalist to ever interview him – a wide-ranging conversation that covered Martin Luther King, Louis Farrakhan and the concept of the nuclear family. As an early advocate of the band, Fadele helped ensure ‘Yo! Bum Rush The Show’ and ‘It Takes A Nation Of Millions To Hold Us Back’ were named NME’s best album of 1987 and 1988 respectively. “I think he really cherished the intellectual interview,” recalls Chuck. “Once we were face to face, he was questioning: ‘What’s all this piss and vinegar, USA bravado when I’ve read Frantz Fanon and you probably haven’t?’ He didn’t take us for just being fire and brimstone, although he could have.”

33 years on, you still can’t accuse Public Enemy of just being fire and brimstone – although they usually deliver on that front too. On ‘What You Gonna Do When The Grid Goes Down?’ they sound as urgent and as necessary as ever. “We don’t look for dire circumstances or bad times in order to put out relevant records,” says Chuck, somewhat ruefully. “I’d much rather put out things like ‘Public Enemy Number Won’, and have peaceful times.”

‘What You Gonna Do When The Grid Goes Down?’ is out now.

The post Chuck D: “Public Enemy, Run DMC and Beastie Boys on one track was a utopian moment for me” appeared first on NME Music News, Reviews, Videos, Galleries, Tickets and Blogs | NME.COM.