Maryland rockers CLUTCH have announced the fourth installment of their live stream series, "Live From The Doom Saloon". Set to take place on Friday, November 26 at 5 p.m. PST/8 p.m. EST live from the band's rehearsal space, "Live From The Doom Saloon Vol. 4" will feature a special set list of old songs, deep cuts, some classics and something brand new. Ticket holders will be able to re-watch the show on demand until 11:59 p.m. on Sunday, November 28. Tickets and merch bundles are on sale now from www.clutchmerch.com with proceeds benefitting the Lustgarten Foundation pancreatic cancer research. CLUTCH commented: "We just wrapped up tracking our new album so we're ready to play a show! Come hang with us on November 26 for 'Live From The Doom Saloon Vol. 4'. We'll stream this show live from our rehearsal pad. We're gonna play something from every one of our albums and maybe even something brand new!" The previous three iterations of the "Live From The Doom Saloon" series were staged throughout 2020 during lockdown. "Live From The Doom Saloon Vol. 1" was held in May 2020, with support from CROWBAR, BLACKTOP MOJO and SAUL, with proceeds benefitting MusiCares and Angel Flight West. "Live From The Doom Saloon Vol. 2" took place in August of 2020 and featured a huge fan component as the band encouraged fans to submit their dream 14-song setlist. The winning submission was not only performed by the band during the livestream but also received a plethora of massive prizes. Show donations from "Vol. 2" benefited the Innocent Lives Foundation, a charitable organization that combats the trafficking and exploitation of children, of which singer Neil Fallon is a board member. "Live From The Doom Saloon Vol. 3" happened in December and featured a setlist of the 15 most requested songs from the submissions sent in for "Vol. 2" and raised money for Save Our Stages, a charitable organization that raises money for over 3,000 independent venues in 50 states. CLUTCH will hit the road for the third and final leg of its "30 Years Of Rock & Roll" tour on December 27, stopping in five cities beginning in Baltimore, Maryland and wrapping in Cincinnati, Ohio on New Year's Eve. Special guests on this leg will be STÖNER (featuring Brant Bjork and Nick Oliveri) and NATIVE HOWL. Earlier this year, CLUTCH drummer Jean-Paul Gaster told the Chicago-based webzine Metal Kaoz that he and his bandmates have "written a lot of songs" for the follow-up to 2018's "Book Of Bad Decisions" LP. He said: "We've been writing now for our new album that we will record in the fall, and I think we're spending more time than ever in the studio, just trying out different ideas. And most of the ideas don't ever really make it to the end; we try 10 things and we keep one. "I think we are even more selective than we were before as to which ideas we really decide to focus on. And I think it is because we have so much more time. Before, we would come home for a tour and maybe we would have three weeks off. So, the first week, we don't do really much of anything — everybody goes back home to their families and we rest — and then the next two weeks we would get together and we would just jam really hard and get a bunch of ideas, and then on the road and play those ideas, and then come back and do it again. And that process might go on for a year and a half. This has been different. This is the first time where we've had so much time at home to work on ideas and never really tried them in a live setting. So I'm not sure how it's gonna impact the record. But I think it's gonna make for a different album — whether it's good, bad or otherwise, it's too early to tell. But, for sure, it's a different dynamic, and it requires more of us. "So often, when we have new ideas and we put them in front of an audience, you can really tell right away — we know right away if the song is the right tempo, we know right away if the riffs are where they need to be, if the chorus is the way it needs to be," Gaster added. "It's a testing ground. And we don't have that right now. So, for that reason, I think we are being a lot more careful about what ideas we really wanna focus on, and which ones we think, 'You know what? We've done that before. Let's do something a little different.'" Gaster went on to say that the new CLUTCH album will likely arrive in early 2022 — "hopefully before we start really hitting the road again. And it'll be fun to get back out there," he said. "Man, I just miss it so much." "Book Of Bad Decisions" was recorded at Sputnik Sound studio in Nashville, Tennessee with producer Vance Powell. The record sold 26,000 copies in America during its first week of availability, giving the group its third consecutive Top 20 album on the Billboard 200. 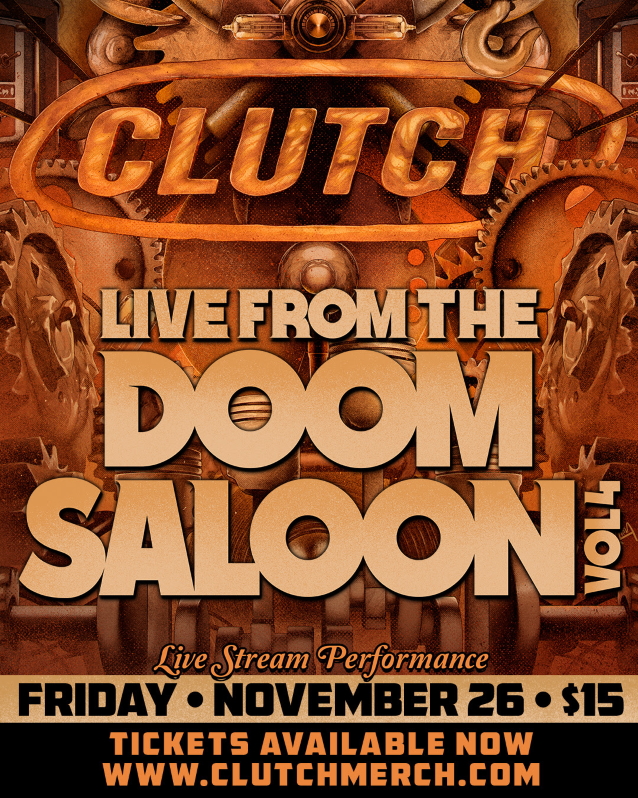