EYE OF MELIAN is the brainchild of Dutch songwriter and producer Martijn Westerholt, known for DELAIN and WITHIN TEMPTATION. As the main songwriter of the metal band DELAIN, Martijn wanted an outlet to create lush orchestral fantasy music. In 2017, he teamed up with American lyricist Robin La Joy, a life-long fantasy enthusiast who spends much of her time immersed in books, particularly the works of Tolkien. Their mutual passion for fantasy-inspired music led them to the creation of EYE OF MELIAN. EYE OF MELIAN's ethereal and symphonic music has been described as movie score-like — unfolding epic and elegant storyscapes in the listener's mind. Successful Finnish solo artist Johanna Kurkela's angelic voice quickens the fantasy to full life. She is also known for her work in AURI, ALTAMULLAN ROAD and her husband Tuomas Holopainen's (NIGHTWISH) album "Music Inspired By The Life And Times Of Scrooge". Also contributing to the project is Finnish orchestral arranger and producer Mikko P. Mustonen who has worked on many successful releases in various genres. It is his incredible talent in classical arranging that adds the final magical touch to the music. The EYE OF MELIAN crew — Martijn the heartbeat, Robin the soul, Johanna the voice, and Mikko the skeleton — aim to craft music which takes the listener away to sojourn dreamy landscapes and otherworldly realms. Their debut album is expected to be released in 2022, with the first single now available for streaming below. Guest musicians on EYE OF MELIAN's debut album include multi-instrumentalist Troy Donockley (NIGHTWISH, AURI) on pipes and flutes and Celtic metal artist Leah with her signature ethereal vocals. EYE OF MELIAN said: "We are EYE OF MELIAN, comprised of a Fellowship of four different people from three different countries — The Netherlands, United States, and Finland. All four of us are life-long, nerdy fantasy fans and share a passion for ethereal and symphonic music. So we have had an incredibly exciting experience setting out on this journey to create fantasy-inspired music to share with all you kindred spirits out there. "In the meantime… here are some facts about us: We are independent music (no record label is calling the shots) and because of this, we rely heavily on people sharing our music with others (hint, hint); our music is crafted to sound like it came right out of a fantasy movie score; our lyrics contain poetic fantasy/Tolkien-type themes (though not ALWAYS direct Tolkien references…there are definitely some though!" 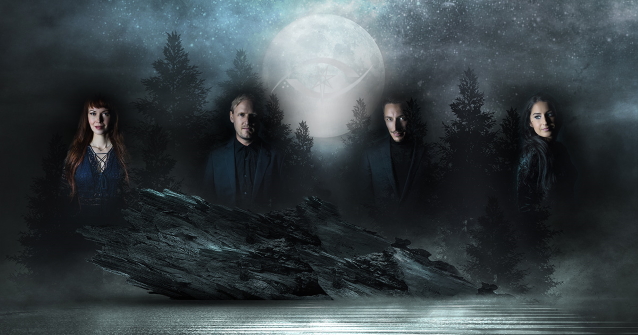