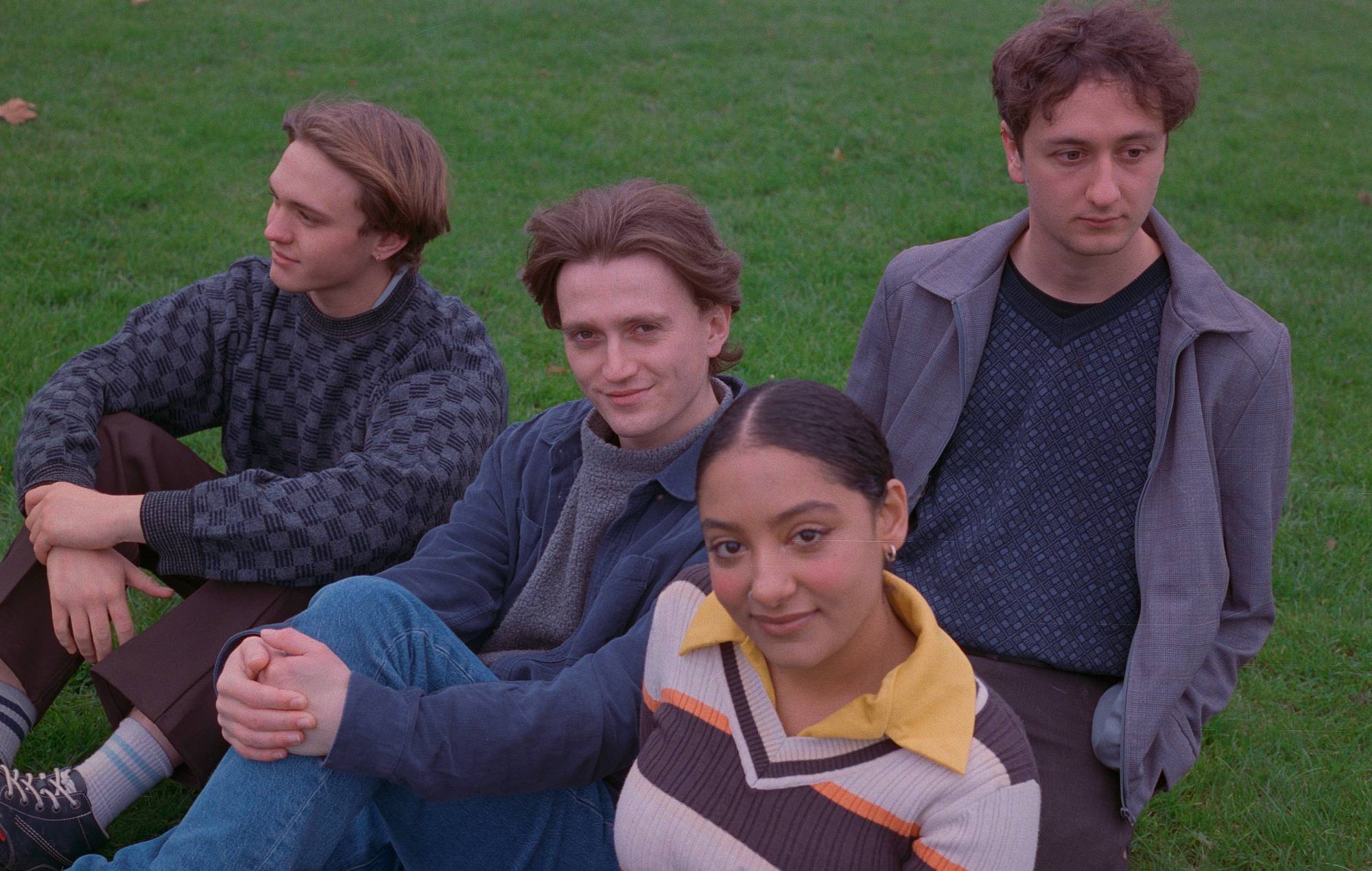 “Sports Team, Dry Cleaning, English Teacher: new bands need to sort their names out.” What may read like a throwaway tweet from a grumpy Twitter naysayer strangely encapsulates where indie music is at right now; exposing the cracks in not-so-great Britain by carving lyrical intricacy from the seemingly mundane. For the latter band of the three, the disparaging tweet is pinned at the top of their profile as a badge of honour rather than a stick to be beaten with.

Having wasted no time post-lockdown, they’ve already racked up over 20 gigs supporting the likes of Do Nothing and TV Priest, conquered their first Reading & Leeds and created enough buzz around double-A-side ‘R&B’/‘Wallace’ to sign to Nice Swan, home of Sports Team, Courting and The Rills. It’s enough to swell any young band’s ego, but if you ask them why they think their music is resonating, Fontaine will give you an effacing answer.

“Honestly, I feel like a lot of places have been looking to spotlight bands that have got women in them, and women of colour in indie just isn’t really a thing,” she says. “I don’t want to put ourselves down, but I do think it’s helped, being visually different. Obviously I hope it’s something to do with our music too…”

English Teacher are not necessarily a band who would boast about themselves, so it’s a good job that NME are willing to do it for them. As exemplified on ‘R&B’, a brooding narrative that ricochets between sweetly-satirical compliance and open confrontation of the racialised expectations of a frontwoman of colour (“Despite appearances, I haven’t got the voice for R&B / Even though I’ve seen more Colors Shows than KEXPs”), this is a group that are willing to enter potentially awkward conversations while moving with a melodic speed that defies direct comparison. “Last night at a gig, this guy said we sounded like Pixies without sounding anything like Pixies,” says Douglas. “I don’t know what that means, but I’ll take it!”

There’s also their tireless work ethic. Deeply involved in the north Leeds scene, English Teacher exist within the same hotbed of creativity that has incubated smart-rock breakout bands such as Yard Act, Alt-J and Wild Beasts, feeding off a spirit of collaborative ideals. For Fontaine especially, keeping her diary straight is quite the task: English Teacher and her other band, Eades (in which she contributes keys and vocals), were both signed to labels in swift succession, creating a deluge of commitments. “As an incredibly disorganised human being, I’m not the best at it,’ she says, laughing. “But it’s nice to be doing what you’re passionate about so much of the time. It’s a good kind of stress!”

With their currently-untitled debut EP in the works, English Teacher are making good on their early momentum. No song ends in the same universe that it began: ‘Yorkshire Tapas’ shares initial DNA with Alex Turner’s 2008 cult-spoken-word piece ‘A Choice Of Three’ (a noted influence of Fontaine’s), but descends into a groovy guitar meltdown that splits the difference between Cajun Dance Party and Yuck. ‘Mental Maths’ begins as a gentle ghost story before morphing into full supermarket drama, begging to be translated into short film. What does it all mean? At first listen you can’t be entirely sure, but that’s English Teacher’s beauty: a catchiness that peels away in slowly-yielding layers; songs that lull you into narrative reality before abruptly changing course.

On lead single ‘Good Grief’, the group are in a more direct mood. Described as “the love story of Track and Trace as they navigate their relationship through 2020”, it possesses one of the most damning opening lyrics of the year: “Bring out your dead and make them a hashtag / The internet is the only one keeping track.”

“2020 was a shit year, obviously,” Fontaine elaborates. “There’s been a lot of issues with the government’s handling of the pandemic, and so many other things happening in the same timespan — TikTok dances, Karens in supermarkets refusing to wear masks. I wanted to document it all somehow. I had this idea of the cowbell being a sort of ‘bring out your dead’ march, and from there the guys just turned it into a banger. Nick’s bassline — whoever we show it to, they’re just like, ‘That bass is naughty‘.”

Dreams of naughtiness in place, the fresh energy that has carried English Teacher through a summer of festival firsts right up to their imminent local spot on the Sports Team tour is showing no signs of running dry. “I feel like it’s definitely helped us to glue the EP together, just constantly playing and getting into the swing of things,” says guitarist Whiting of their touring experiences.

“It’s brought us closer as well,” adds Fontaine. “We were already tight, but being around each other all the time on tour, talking about music, it really strengthens that bond. Every show we’ve played, I feel like we just sound a little bit more like the band I want us to be.”

And what exactly is that band? Let’s throw modesty to the wall: what would Grade-A success look like to English Teacher?

“I think when [music] becomes something we can do all the time,” says Whiting. “The idea that you could possibly be lucky enough to have your whole job be music, that would be the dream.”

“That’s it,” chips in bassist Eden, quiet until this exact moment in our chat. “We want to sound lucrative!” It’s a pragmatic answer, but it’s one that perfectly suits their style: level-headed, cautiously confident and letting their music do the talking. You know how the old saying goes: it’s often the quiet ones you’ve got to watch out for…