This review was originally part of our Sundance 2020 coverage.

The Pitch: Toiling away in the heat and poverty of the Louisiana bayou, Wendy Darling (Devin France) lives with her twin brothers James and Douglas (Gavin and Gage Naquin) and hard-working mother Angela (Shay Walker) by the train tracks, and dreams of adventure. One day, adventure comes knocking in the form of Peter (Yashau Mack), an impish child wearing a tattered school jacket and climbing the night train, bringing the Darlings along with him. Before long, they’re on a mysterious island where active volcanoes roar at every turn and no one seems to grow old.

Kill Your Darlings: It’s been eight whole years since Benh Zeitlin’s debut — the whimsical, lyrical children’s adventure Beasts of the Southern Wild — became one of 2012’s surprise breakouts and turned co-composer Dan Romer into a household name. In the intervening time, Zeitlin was hard at work creating his followup, a ruggedly fantastical reimagining of J.M. Barrie’s Peter Pan mythos into the Beasts aesthetic.

Whether you like Wendy will depend almost entirely on your continued tolerance for the baby-Malick stirrings of Zeitlin’s style: roving, evocative camerawork; the unpolished roughness of unknown child performers; treacly sentiment pouring from each horn blast of Romer’s score; or France’s storybook narration. At nearly two hours, that’s a lot of syrup to pour down your throat, and the unapologetic mawkishness of it all can rankle after a while, even if you’re attuned to the film’s wavelength. 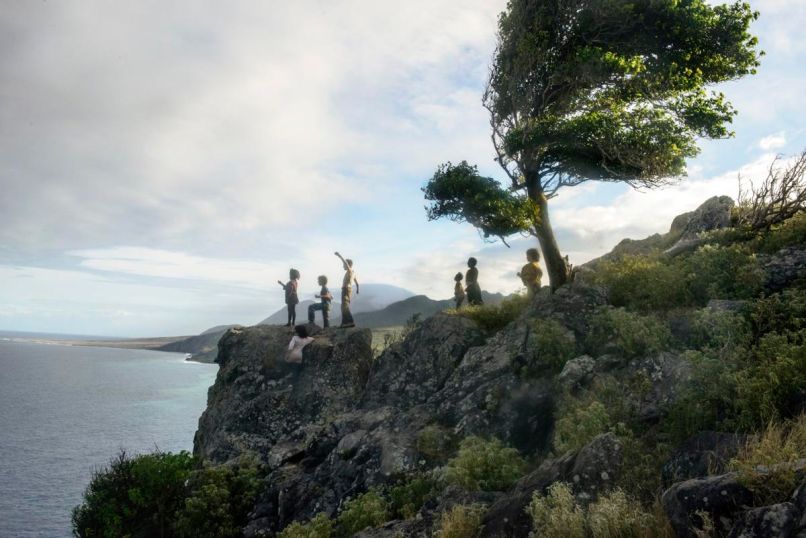 Clap If You Believe: But there’s something inexorably charming about Zeitlin’s sense of childlike wonder, even through the rusty auspices of his poverty-stricken settings. Zeitlin’s script, co-written with his sister Eliza, cuts to the essential heart of play that feels central to the Peter Pan story, and reinvents it in intriguing ways that evoke the matured melancholy of Where the Wild Things Are. Neverland isn’t just some magical place: the Lost Boys’ gifts of youth are supplied by an otherworldly creature they call Mother (a kind of whale-like beastie who swims under the island and breathes an orange glow that supplies the magic at play). It’s a playground, and Zeitlin and cinematographer Sturla Brandth Grøvlen adorably capture the feeling of kids finally being given the freedom to not just play in the sandbox, but to live in it too.

What’s more, there are rules to staying young: keep playing, never stop moving, and never give in to melancholy. Violate those rules, and the island punishes you, as Wendy soon learns after discovering a population of elderly shunned by Peter’s kids. It’s these moments that offer the most interesting twists to the Pan story, especially as the eventual origins of Captain Hook come from an unexpected place. Even as the meandering first half gives way to more plot-oriented storytelling as the climax nears, Zeitlin keeps the film grounded in a dream logic that, if you’re on board, feels like the kind of imaginative chaos you’d get with a child’s breathless account of a new story.

Peter Panhandle: Still, there’s plenty to be wary about with Wendy, especially when it comes to issues of representation and who’s telling whose stories. Accusations of poverty porn and appropriation plagued Beasts in the years since its release, and the white Zeitlin choosing to tell another bayou-chic story featuring young black boys or girls with seemingly magical powers is certainly a risky prospect. Here, the critiques would likely be crystallized around Peter himself, who practically embodies the racist trope of the magical black man. Peter’s unpredictability and flaws help elide that a bit, but it’s certainly a hurdle that Wendy struggles to clear.

The Verdict: For all its rough edges and lengthy asides, there’s some of that old Beasts magic in Wendy, a double-shot of Zeitlin’s ineffable twee energy that should delight those who choose to believe. Peter Pan is one of those timeless children’s stories that can survive these kinds of revisionist adaptations; it’s a fable about the inevitable necessity of growing up, and how our terrified desire to stay young can end up poisoning us. “To grow old is a great adventure,” Wendy whispers in the closing minutes of the film; it’s an obvious lesson, to be sure, but one well-earned.

Where’s It Playing? Wendy is seeing a limited release via Searchlight Pictures.

Film Review: Clap If You Believe In the Breathless Whimsy of Benh Zeitlin’s Wendy
Clint Worthington