With High Fidelity, we didn’t just fall for John Cusack, we fell for the record store. Championship Vinyl, the fictional Chicago shop at the center of the film, is a pop culture gold mine, and one designed with the utmost detail as we recently learned.

Who knew vinyl would have such a resurgence in the new millennium back in 2000, but here we are, still talking about it, still hungry for it, and, more importantly, still shopping for it. But how much did they get right about running a shop?

In celebration of the anniversary, and in conjunction with our definitive oral history, we reached out to South Florida’s own Radio-Active Records to get some insight. Below, shop manager Gunther Schenk broke it down through five quotes.

What’s more, he also put together a playlist inspired by the film, complete with liner notes, and is giving away one free vinyl copy of the High Fidelity soundtrack to a lucky fan. Think you deserve it? Enter into the giveaway at the bottom.

“I will now sell four copies of “The Three EPs” by The Beta Band.” ::drops needle to record:: 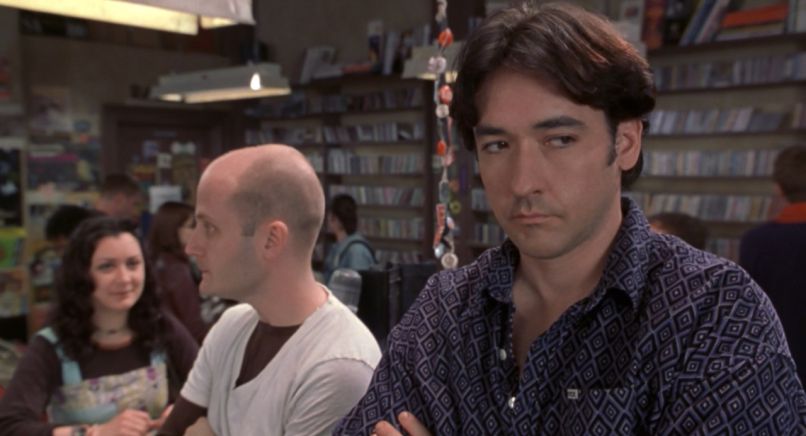 What Gunther says: “Radio Active Records is constantly playing new releases and music that our staff digs—both in store and online. I always like to spin records that we know we have in stock, and I like the dialogue that results from them even more. As of late, this dialogue has been centered around newer soul groups such as Durand Jones & The Indications, Monophonics, and the killer new collaborative EP by Khruangbin and Leon Bridges, entitled Texas Sun.”

“You don’t have it? That’s perverse! Don’t tell anybody you don’t own fucking Blonde on Blonde— it’s gonna be okay.” 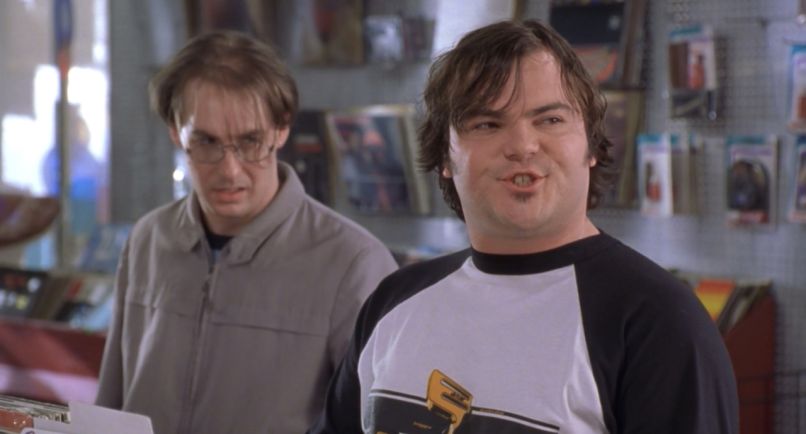 What Gunther says: “Certainly not in the style of Barry’s character— we are always recommending bands based on what people like. The conversation though— is always a two-way street. We love sharing and learning new music with anyone who walks into store.”

“I hired these guys for three days a week and they just started showing up every day. That was four years ago.” 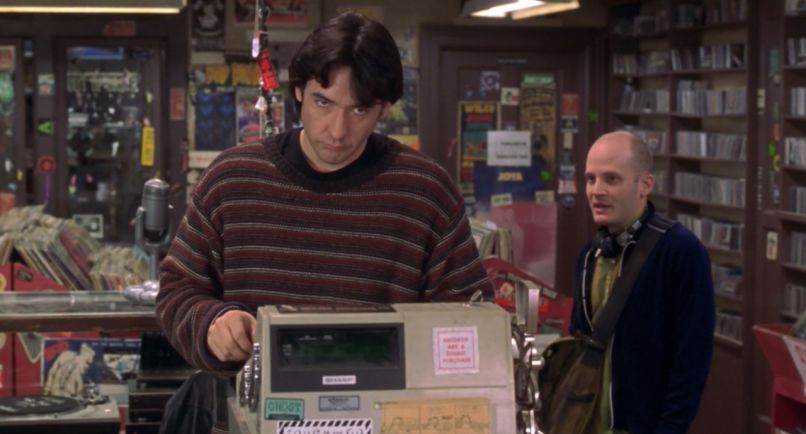 What Gunther says: “Like Barry and Dick got their starts at Championship Vinyl, I started at Radio-Active by coming in a few days a week. Now, some three years later, I naturally am at the shop (almost) every day and can’t seem to stay away! While Barry and Dick are portrayed in their respective lights, the real thing is that they were good fits for the record store. Knowledge is power, and applying and growing that base every day and passing in onto customers makes for a great musical chain reaction of sorts. I don’t recommend ignoring customers though…”

“Get your patchouli stink outta my store!” 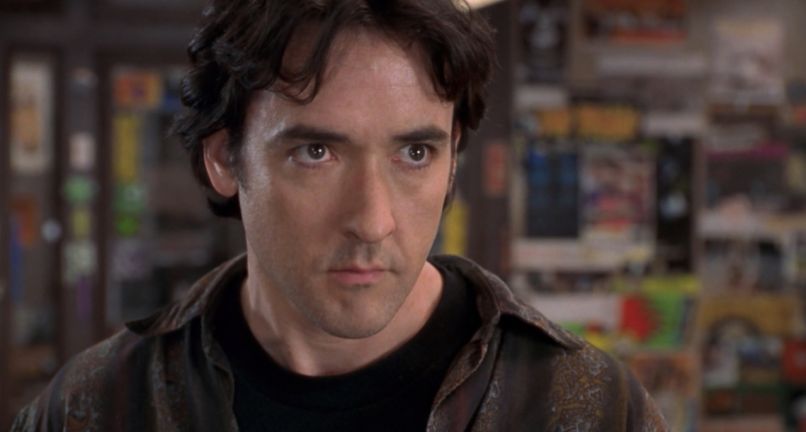 What Gunther says: “We see some weird stuff from time to time. People yelling, those bizarre out-there characters, the oddest non-music requests, even a couple instances where literally any of those stories that you hear of Florida Man— yeah those occur in our four walls. We truly have seen it all.

“What really matters is what you like, not what you are like… Books, records, films – these things matter. Call me shallow but it’s the fuckin’ truth.” 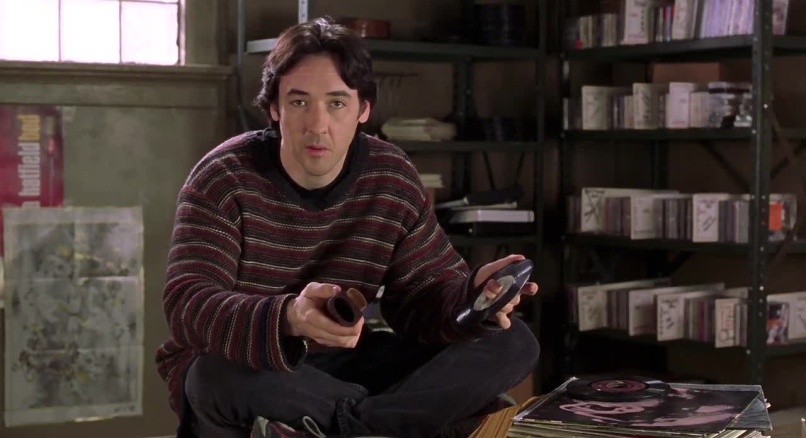 What Gunther says: “Everyone that walks in through our doors has their own story. Community is a huge part of what we do and having anyone and everyone into our shop gives us life. But, what brings us together is the music and what people are interested in. Just like having your own story, everyone has a different interest. We want to provide what you like, even if it’s something we don’t.”

Durand Jones & The Indications – “Listen To Your Heart”

Coinciding this song with our shop and the movie! Durand Jones & The Indications have been shop-favorites ever since last year’s American Love Call LP. We are constantly playing (and selling, phew!) this album regularly. You can say we are listening to our hearts as we feel the music needs to be heard, like Rob finally realized that

Charles Bradley – “You Put The Flame On It”

When we think of a quintessential “record store artist”, Mr. Charles Bradley (R.I.P.) is always the first to come to mind. Although his career got off to a rather late start, the love that independent record stores gave him was a huge part of his growing aura. Lyrically, Bradley croons “I found out it was you. All I need is you” and we are brought to to end of the movie, where Rob realizes this about Laura.

More psychedelic soul, we got the vibes from Sonic Death Monkey’s debut (and hopefully not their last) performance. Leon Bridges often gets the comparison to late-60’s-era Marvin Gaye and you can hear it on the Texas Sun EP, a collaborative project between Bridges and Texas Psych trio Khruangbin (an extremely popular title at Radio-Active).

An ode to the times of High Fidelity. Bully’s 2017 ripper “Losing” sounds straight out of the ’90s Sub-Pop catalogue and we could have easily seen them touring with the likes of the Melvins and Screaming Trees.

Bugg – “Whiskey In The Water”

Did you ever notice that right at Rob’s apartment entrance is a nice big Pavement poster? We did, and Bugg’s 2017 piece “Whisky in the Water” was channeled immediately. Think VCR-based music videos and late-’90’s era Matador Records and you have Bugg!

I chose this one from a certain experience that resonated from the film. My first experience of synchronized customer head nodding (think: Rob and The Beta Band at Championship Vinyl) was when I played this song at Radio-Active on a busier-than-usual Sunday. Three minutes later, five separate people are asking about the record. It was a bummer that we only had one available, but new music for new ears is always a win!

Going off of the theme of mixtapes, Culture Abuse is a band that utilized mixtapes on their tour last September. In addition to their punk-meets-psych hybrid of rock and roll, the tape also features rippers from band that they have played shows with, such as Fiddlehead, Cold World, Result of Choice, Never Ending Game, Praise, and the next band on our playlist. Can’t go wrong with their track “Jealous”. Maybe they wrote it about Rob and we never knew?

Gouge Away not only is featured on Culture Abuse’s mixtape, but they have toured together (domestically and internationally) on numerous occasions. Gouge Away also got their start down here in Fort Lauderdale and we could not be prouder of them. “Stray/Burnt Sugar” is in our shop’s in-store playlist as well, and we are always turning new people onto them when we can.

Music recommendations run far and wide, and I took that into account for this next artist. A regular of ours came into the shop on a massive Catherine Wheel kick one day and asked me if there were any newer bands that channeled the same sound. Say no more, and next thing we knew he was buying a Narrow Head LP. This track could easily fit in on “Ferment” if it hopped in a music time machine back to the early ’90s.

The Strokes – “Take It Or Leave It”

The Strokes are the band that I think of when walking into a record store. At ours, it seems as if everyone who comes in likes them, we are constantly getting Is This It into collections of existing fans, and we are introducing many new people to the band with this album being played regularly. We can’t really call this one a “modern classic” anymore as 2001 was a long time ago (sorry for the potential existential crisis!), but an important album of the 2000’s that everyone needs? We think so.