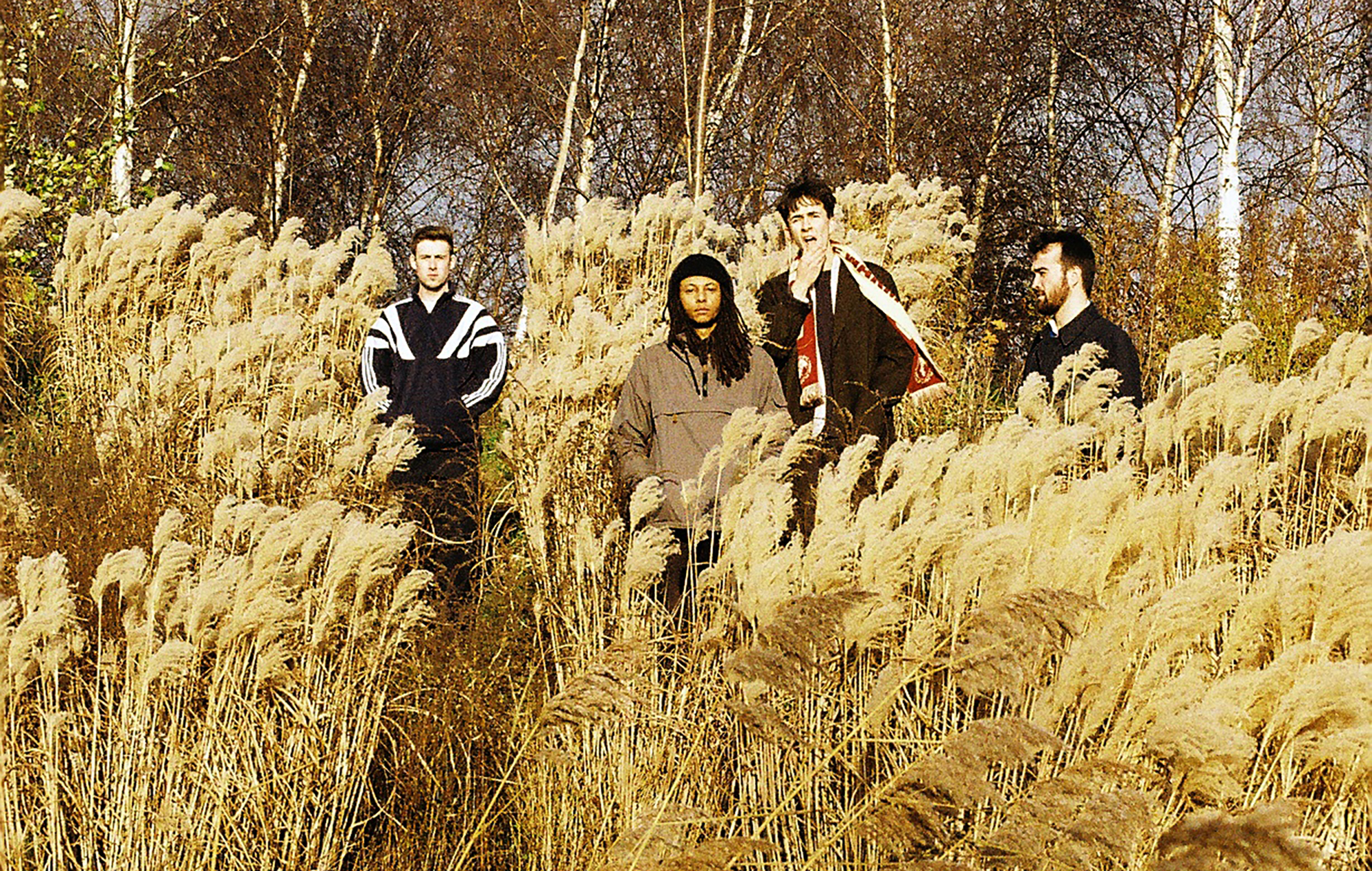 “The internet exists. We don’t have any excuse,” bassist Tom puts simply. Having spent the past three months across two separate households and with a multitude of shows cancelled, it’d be easy for London-based Folly Group to put everything on hold. Instead, they’re taking the new normal in their stride.

To get over living apart, they’ve been connecting with each other via Zoom to perfect and gear up for their latest release the pummelling new single ‘Fewer Closer Friends’. “We’re doing this interview with you via Zoom – so we can do the same,” he continues, though admitting the obvious, that it’s not as fun as being in a room together.

In its current set-up, the collective has been brewing for a while with each member having been across different projects together over the years. As with most great ideas (and some bad), it just took one it just took drunken train ride home for the realisation to kick in. “We were all trying to do things separately,” guitarist and co-vocalist Louis remembers. “Three of us moved in together a few years ago, so it was ridiculous that we hadn’t.”

The time spent building up to Folly Group’s inception was far from wasted as they gradually uncovered what direction they want to take. They’d already made the mistakes “every band needs to make” (albeit “a lot of them” percussionist and SPD-player Kai jokes), like being too multifaceted in their sound and not being able to replicate songs live. But they’ve since worked out how to balance ambition with feasibility. “After Kai had fully joined the group and we’d incorporated the electronic sound, there was an eureka moment,” Louis says.

Not wanting to rush things, they focused on their live show at first before developing any kind of online presence. Even now, the live show is at the forefront of everyone’s mind when writing – you can imagine the racket of ‘Fewer Closer Friends’ pinging off the walls of the capital’s sweatbox venues. “It gives you limitations that force you to be really creative,” drummer and co-vocalist Sean adds. “It gives us healthy confines which lends themselves to making the best with what you’ve got, as opposed to just chaos.”

They finally said hello proper to the online world back in January with the controlled chaos that is ‘Butt No Rifle’ – erratic post-punk that’s so calculated and cohesive, every tempo change and electronic curveball goes without question. They share the same bark as Canadian collective Crack Cloud, while having the nervous, snappy energy of the Nick Cave-starring pioneers, The Birthday Party. These mixed with tumultuous electronic lashings – think Scalping and Klaxons – amalgamate into a scrawled mission statement; anything and everything goes.

With a group so focused on live performance, it’s impossible to ignore how much the coronavirus pandemic has scuppered their plans. “Having live music swept out from underneath us is a bitter pill to swallow,” Louis admits. Sean adds; “We almost decided, before it became apparent how long lockdown was going to last, that we weren’t going to put another song out if there wasn’t a live show to celebrate. It would feel half-released.”

Luckily, they’ve been able to record in Louis’ bedroom studio with Kai sending across his parts to be mixed. But the creator’s guilt hasn’t gone amiss. As the country started to shut down, an “unhealthy feeling of necessity” made them choose 12-hour stints working on “the worst ideas we could ever think of”, over their daily prescribed walk.

One track to successfully stand the test of lockdown is their latest release ‘Fewer Closer Friends’. The “anxious, angry, how-to” is a reminder to us all that adult life isn’t what it’s bigged up to be. “Make sure you enjoy primary school everyone,” Tom chimes in following the others’ sombre descriptions of naivety. If the rampant maximalism and aggression wasn’t obvious enough sonically, the accompanying visuals of a naked guy headbutting a leopard sure make a bold enough statement. Nervous jokes about a call from PETA aside, the release emphasises how well the collective works.

“It shows the beauty of collaboration.” Louis adds. “Someone hands over something and there’s no explanation. They’re just like, ‘this is this now. You want it, you got it.’ We got something out of it that we wouldn’t have got if it was just the four of us.”

There might be uncertainty over the state of music for the foreseeable future, but Folly Group seem to have everything sorted and mapped out. “We’re always thinking about a year ahead,” they summarise. “This is our idea. This is our system. These are our friends. Our lines of communication within this collection are so clear that we’re much closer to getting exactly what we want.” With full creative control and a little black book of friends that can help where needed, it feels like 2020 won’t be the setback it could have been.