Foo Fighters have premiered a new song called ‘Soldier’ that was recorded during ‘Concrete & Gold’ sessions.
The track appears on the compilation album ‘7-Inches for Planned Parenthood’, which is streaming from today and released as a box set on Friday 11th November.
All proceeds from the release will go to sexual health charity Planned Parenthood. The blurb promoting the album reads: “Lawmakers with extreme views are working hard to shut down Planned Parenthood.
“If they succeed, millions of Americans will lose access to basic health services, including STD testing and treatment, birth control, and cancer screenings.
“7-inches for Planned Parenthood is a response to this threat. This curated series of records is made by a group of people who believe that access to health care is a public good that should be fiercely protected.
Boasting epic tracks like ‘Run’ and ‘The Sky Is A Neighbourhood’, Foo Fighters’ ninth studio album ‘Concrete and Gold’ stormed straight in at number one when it was released last month.
Foo Fighters’ massive shows at Manchester Etihad Stadium and London Stadium in June 2018 went on sale at 9 am 20th October. 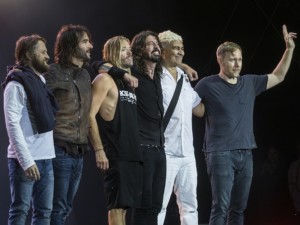