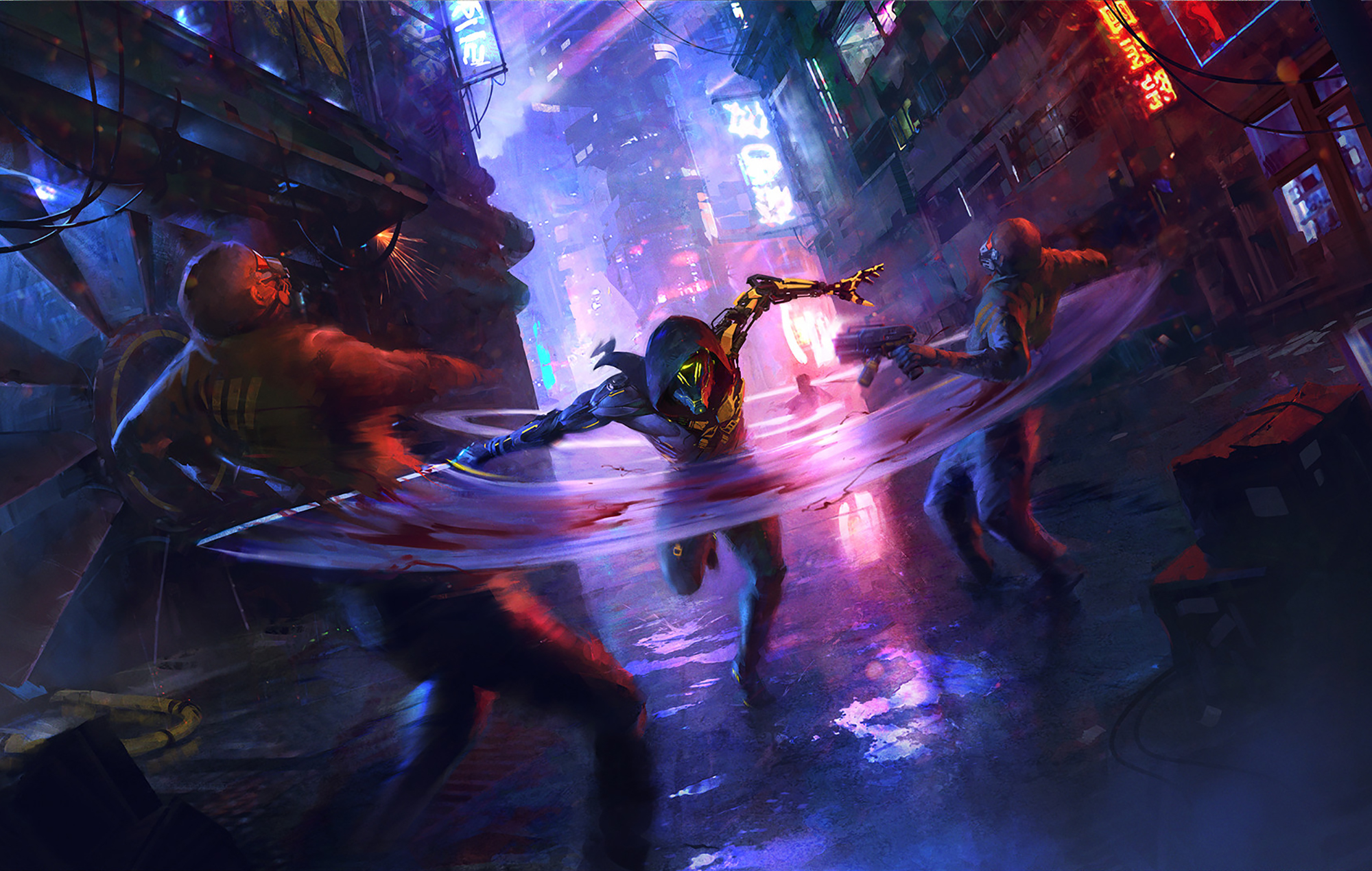 The fetishisation of Asian culture is pretty well-worn in the cyberpunk genre, but there’s something irresistible about Ghostrunner’s premise. It’s a first-person parkour slasher – think Doom meets Mirror’s Edge – where you play as a cybernetic ninja who can jump, dash, grapple, wall-run and slide across levels while wielding a katana that slices clean through foes like melted butter.

An early Steam demo had already set high expectations for this slick next-gen looking game that lets you embrace your inner Genji. Combine that with a campaign that challenges you to ascend a formidable tower of escalating difficulty – which is just the thing to appeal to hardcore players looking for their next masochistic hit, especially when a single hit means a swift death – and you might just have a sleeper hit on your hands.

Missions are structured like multiple arena-sized combat encounters interspersed with parkour platforming, which can be just as thrilling as you wall-run and kick off multiple panels, laser-lasso up to new heights then crouch-slide down a slope at high speed before dropping into the next set piece. Unfortunately, the breakneck pace means you’re not often given the chance to savour the grimy industrial cyberpunk visuals that’s accompanied by the pulsing electronica soundtrack from retrowave producer Daniel Deluxe, which wouldn’t feel out of place pounding a dark, sweaty warehouse rave.

Your ninja skills become more meaningful and freeform when engaging with enemies. Instead of running straight into someone’s blaster fire, you can deflect fire back with your katana or approach from another angle such as wall-running (and outrunning) enemy attacks. You can even activate a Matrix-style bullet-time dash that lets you strafe-dodge before dashing closer within slicing distance.

Each arena is almost a puzzle as you learn your enemies’ positions, figure out the best route to reach them and then take them down, the last kill slowing down the action as if a sign for you to catch your breath. While the early missions work as tutorials easing you into the mechanics, it’s also not long before the game starts to run ahead of itself, the challenges becoming more demanding as you struggle to keep up.

Of course, hardcore players will tell you to “git gud”, and having persevered through hellishly difficult games like Dark Souls, Sekiro: Shadows Die Twice and Hades, I would be inclined to agree. However, Ghostrunner’s difficulty more often than not crosses the line between tough and ridiculous.

The one-hit death rule is hardly fair when it doesn’t strictly apply to enemies who are protected by force fields, which can only be disabled when you locate and destroy the emitters, usually placed higher and further out of reach. Add big shield-bearing brutes who also have a forcefield on top of that, it starts to seem like overkill. These continue ratcheting up, such as robots who blast projectiles with a massive hit area, while the less said about the miserable bastards that explode at close proximity, the better.

But Ghostrunner isn’t always frustrating. One of the better challenges lets you clash blades against other katana-wielding enemies, as you time your parries first to stun before delivering the kill. There’s even an exhilarating boss fight that feels like a first-person sci-fi Sekiro. However, these are rarely enjoyed as one-on-one encounters since you’re often required to juggle multiple threats. There’s nothing as sore as succeeding in a close encounter only to be picked off by unsuspecting enemy fire.

Sure, Doom Eternal is tough too, but you also don’t die in one hit. Even its most nightmarish encounters still allows you to regain resources for a comeback. The best one-hit death games like retro arcade shooters or ultra-violent indie classic Hotline Miami also had a fixed 2D perspective allowing you to anticipate and avoid danger. When you have to negotiate 3D space in first-person at a fast pace while dealing with different enemy types, Ghostrunner’s one-hit death rule feels excessively demanding, often becoming a case of brutal trial and error.

Part of the difficulty is also mastering the controls, which feel just a bit too slippery to keep up with the action. I can accept there were times I mistimed a dodge or couldn’t see a laser coming my way, but of the countless deaths faced during this campaign, so many came down to parkouring pratfalls where the speed of traversal means it’s all too easy to make a mistake even from the most straightforward platforming sections.

I’ve had moments where I grapple over to a billboard I’m supposed to wall-run on, only to just fall right back into the bottomless pit below, or slow-dodge enemy fire only for my dash attack to miss. One fiendish sequence that truly takes the cake requires you to grapple up a tower of moving lasers in succession, but also asks that you also time it with the arc of where you’re swinging from.

There are a few concessions, however, including a generous number of checkpoints and unlockable upgrades that slot into your management system like Tetris pieces, providing some useful buffs, such as increased dash recovery or the ability to see enemies through walls. Special skills unlocked during the campaign, on the other hand,aren’t nearly as helpful as they should be. For example, a blink that lets you line up multiple enemies for a kill relies on a focus meter that takes just too long to build up.

Attempts to change the pace are less successful, especially during the story when you’re sent to a space known as the cybervoid to perform some uninspired platforming and puzzles that maddeningly don’t make use of your ninja parkour. Moreover, the story – you are part of a resistance fighting back against a corporate overlord in a post-apocalyptic cyberpunk universe – doesn’t win points for originality. It’s never particularly engaging you to listen to the voice actors, while the story forces you to sit through what amounts to filler.

It must also be noted, in light of the graphical problems facing the PlayStation 4 version of Ghostrunner, that the PC version that was played for this review also encountered a couple of performance issues, mainly when it came to ray tracing. Although it’s nothing compared to screen tearing and rough textures on the PS4, the performance still gets in the way of what is supposed to be a breakneck action slasher.

During the moments when traversal, combat and performance are in synergy and you’re just focused on survival, Ghostrunner does sometimes live up to its cool-as-hell cyber ninja premise. But more often than not you’ll find yourself butting your head against the wall just wanting to unplug yourself from it all.

‘Ghostrunner’ is out now for PlayStation 4, Xbox One and PC. A Nintendo Switch version will launch in November.

Under its futuristic sheen, Ghostrunner is an uncompromisingly hardcore action game that often overwhelms with frustrating enemies and slippery controls, tilting the difficulty over into unfair territory until you scrape by after the umpteenth time through luck rather than skill or memory.

The masochistically inclined may relish this as an opportunity for bragging rights and no-death runs, but when more games are able to balance challenge with accessibility, this cyberpunk slasher is for better and worse more old-school than next-gen.