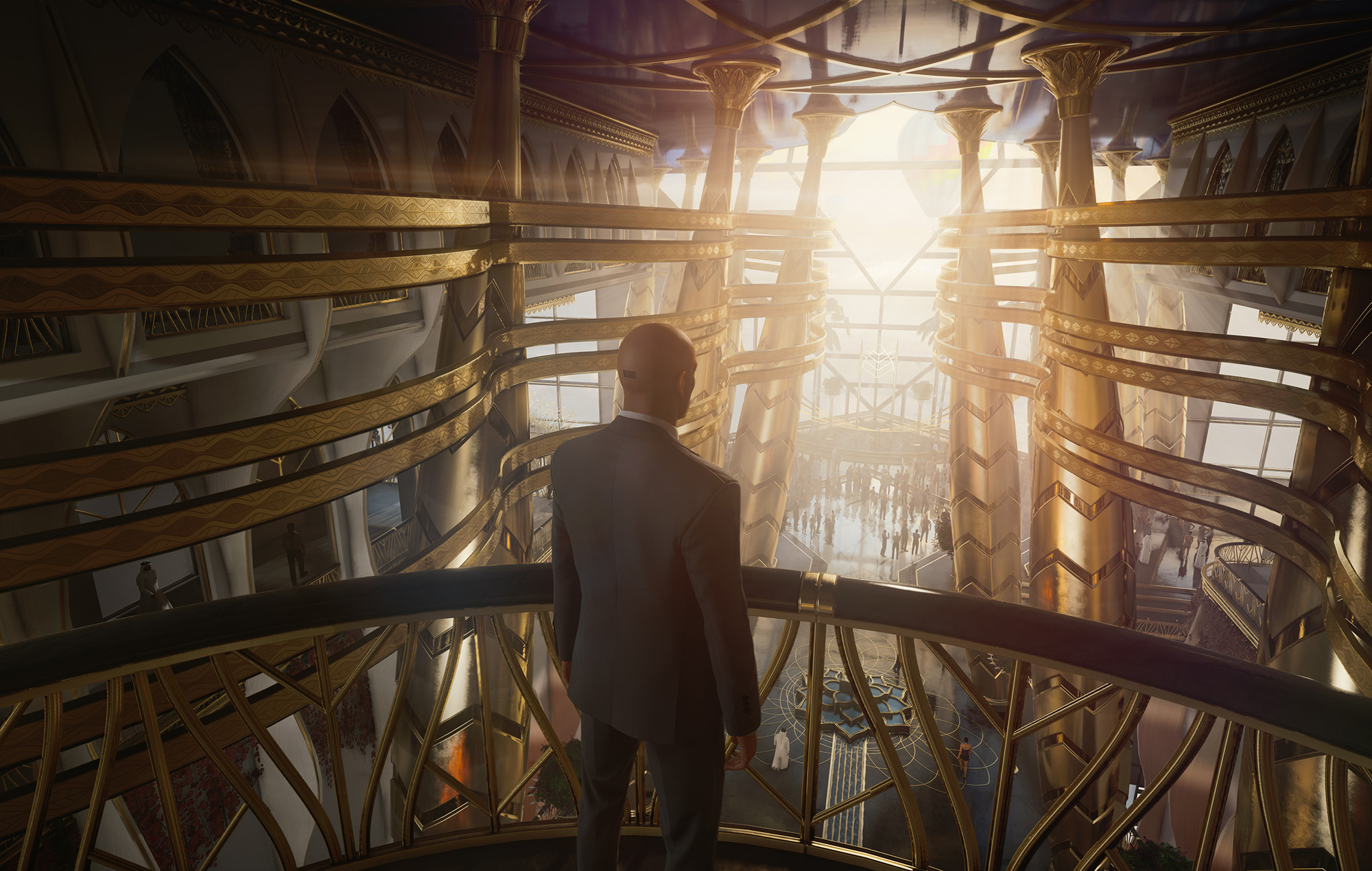 IO Interactive’s (IOI) legendary Hitman series is back for one final bout of absurd assassination, preened to the shiny standards of the next-generation of video game pixel-pushing.

This is one hell of a consistent franchise – fans know what they’re in for, and each game in the series usually rewards their commitment with new features, fidelity and superb silliness. Seriously, has there ever been a truly bad Hitman game? 2012’s Absolution is considered to be the ugly duckling in this 20-year-old franchise, but I still thoroughly enjoyed the slick sandbox stealth it provided.

At this point, it feels like IOI has a thorough understanding of its fan base and the most tasty parts of the inimitable video game sausage they make, and nowhere is that confidence more clear than in Hitman III. The rebooted Hitman ‘World of Assassination’ trilogy (2016-2020) – the last of which we’re studying here – has a strict structure to its design, so much so that every level in the trilogy will seamlessly integrate into Hitman III’s user interface upon launch.

Every mission kicks off in the same way. You get a short briefing, a superb showcase of Bondian graphic design that provides baldy Agent 47 with his targets. Then you choose whether you want to bring the cover micro taser, the blunt force snowglobe or the explosive rubber duck to accent the mayhem you’re about to get up to. And what mayhem it is – Hitman III’s levels are crammed with special stories to follow unto their slick conclusions.

Workman’s tools tease the killing potential of exposed wires and leaking lawnmowers. Devilishly placed grape-crushing machines flick switches in the worst parts of our imaginations. But beyond the most base and bloody of our mind palace creations, Hitman III also offers meticulous, cerebral murder puzzles to unlock and work towards. One of the levels has you take part in a full-blown murder mystery – another has you unravelling conspiracies at an underground rave.

For me, the least fun part of any Hitman mission is the bit where you actually have to kill your targets. I know that sounds insane, but I just adore exploring these levels so much that I never want them to end, no matter how much fun the setup is. There’s nothing more sobering than the quick jog to the map exit where you mutter to yourself “where the fuck did that come from?” and think about what you’ve just done – it’s Hitman III’s adrenaline refractory period.

My Agent 47 looks into each nook and cranny of the Dartmoor manor. I’ll inspect every room, picking up each optional murder weapon and scrap of intelligience on the estate before masquerading as an undertaker and burying my target in an early grave. It helps that each of the six new levels is a level design victory lap – they are places I never want to leave, so I’m thankful I can go back to them indefinitely now that I’ve wrapped up the story. Even with my completionist approach I’m constantly surprising myself with the chaos I come up with, just by thinking my way around the game’s AI, or overhearing a random conversation that leads me down a grisly rabbit hole of pain.

I’d love to chat to whoever writes the ambient dialogue in Hitman, because it’s just perfect. The little chats guards have with each other to decompress and the back-and-forths between suffering sycophants breathe serious life into these pocket worlds, providing an instant understanding of the often contemptuous clientele. The quips of a clever ‘celebrity chef’ character in the Dubai level provided hearty laughs amid all the mayhem, but you’ll meet so many more memorable NPCs I won’t spoil here as you trot the globe, taking heads.

If you’re a teraflop evangelical you’ll be pleased to know that it’s one of the best-looking games I’ve played, too. Fabrics and metals are eye-popping, demanding close inspection. Crowds are considerably bigger than before and each level boasts tremendous, distinct art direction. The rain-slicked cyberpunk hues of Chongqing contrast greatly with the extremely British atmosphere of Dartmoor, with its overcast sky and romantic greenery.

It runs really well on the PS5, at a very smooth and high frame rate in 4K too. The DualSense shines here! Melee is crunchy in the palms and gunshots feel visceral, but it’s the subtle effects that really stuck with me. A train car peels overhead on a set schedule in Chonqging, and I couldn’t believe how realistic it felt. I had to take my headset off and seriously consider whether my brain was just manifesting the vibration – it was pretty stunning!

One strange visual demerit I noted were the game’s pre-rendered story cutscenes, that were pretty jarring to cut to from such smooth and gorgeous gameplay. See for yourself, but it always felt like a big step down in between levels.

I’m no Hitman lore buff, but I did my research before playing and enjoyed the big beats of the narrative and how they were integrated into the gameplay, even if the serious dialogue was mostly weak and predictable. This is a series that is best when it’s aloof, but I think the actual ending cutscenes might still hit home with the mega fans.

The last mission itself is a brilliant proof of concept for the James Bond game – working title ‘Project 007’ – IOI is making next, providing evidence that linear missions are still heaps of fun within the ever-expandable Hitman sandbox. I was left confident that the studio’s next game will be a labour of love, which is a nice coda to bookend an already brilliant experience.

Beyond that, the game crashed quite a few times on PS5, and I was stuck in an endless loading loop on a few occasions that led me to force the app to close. It didn’t matter too much honestly because I was enjoying myself, but the auto save system hasn’t changed since Hitman 2. I still find it to be a little unforgiving, so I did lose chunks of progress even without bugs, purely because the game has a somewhat unruly logic when it comes to choosing when to save your progress.

As for the PSVR component of the game, I did make a little time to check out the tutorial and explore one of the levels – I was surprised at how thorough it is, you really don’t lose much gameplay functionality at all.

It’s a similar situation to Bethesda’s Skyrim and Fallout VR ports where you’re just playing the whole experience as it was intended within virtual reality. In this case, you gesture with the DualShock to thwack targets and carefully put your hands over their heads to garrotte them with fibre wire. I’m really impressed, but I definitely need to play more of it. A full VR playthrough is definitely on the cards once all of the older missions get assimilated.

Escalations are also hilarious fun, even if I was only able to access one in the review period. Trying to figure out how to pacify and execute a specific NPC in a level in record time to get on the leaderboards is something I’m still racking my brain about now. The puzzle is lodged in my brain, and I’ve enjoyed picking at it in the days since I tried. I’ll definitely be playing this game for months after its release, just to test my skills and acquire more tools.

‘Hitman III’ will be available January 20 on PC, PS4, PS5, Xbox One, Xbox Series X/S, Stadia – under the title ‘Hitman: World of Assassination’, and Nintendo Switch.

IOI has done it again, rounding off its ‘World Of Assassination’ trilogy with familiar flair. Hitman III is a confident package of killer content, a buffet of brilliant gameplay opportunities for you to gorge on over many months. With immaculate visuals and environments bustling with details to coax out your most chaotic murder sprees, it’s going to be hard to argue against picking this up if you’re a Hit-fan. It’s also a great place to start for those new to the series, with substantial replay value and a VR outing that amounts to far more than simple gimmicks.