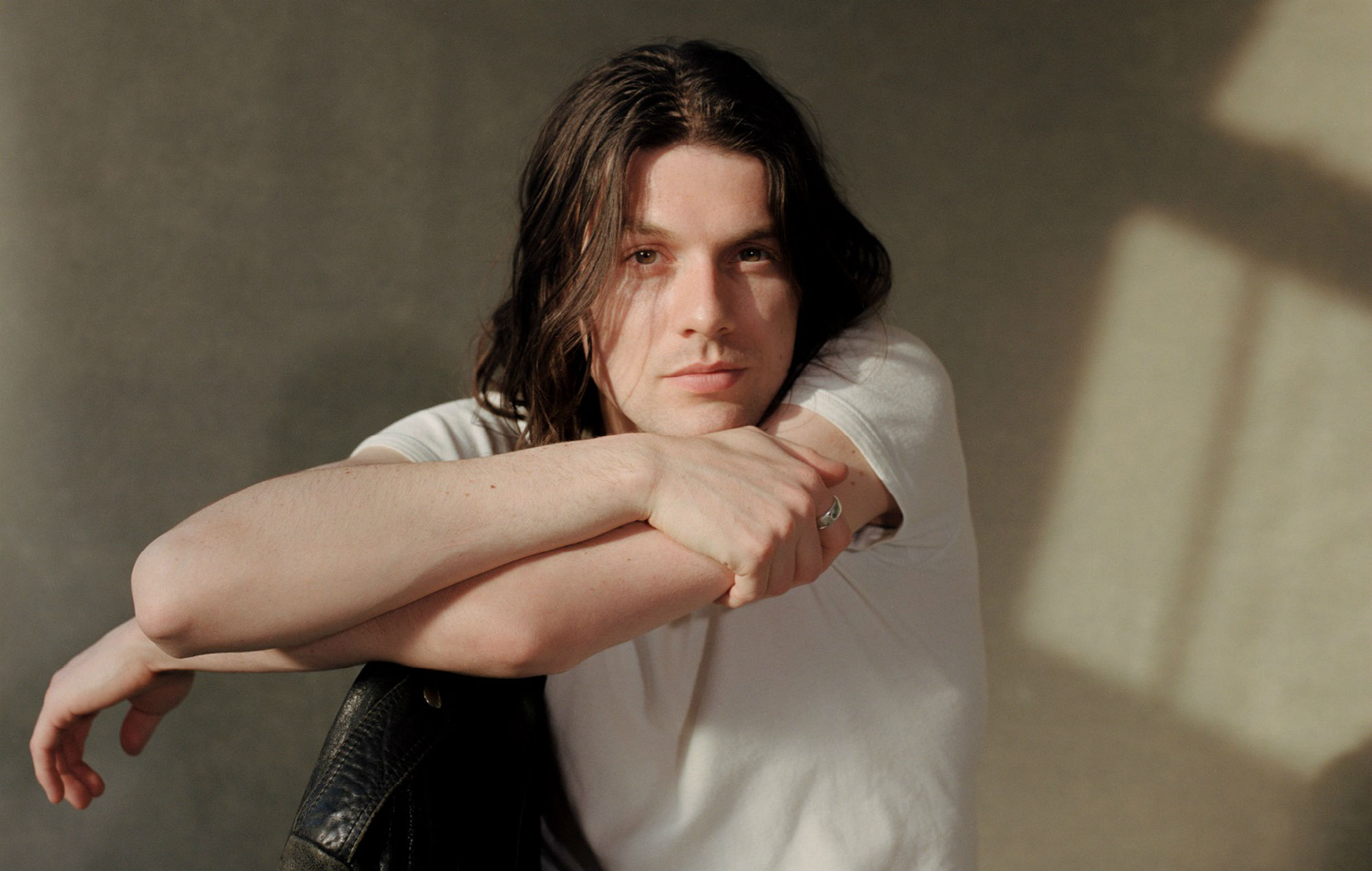 James Bay greets NME over Zoom from his home in London, guitar plectrum in one hand, mug of tea in the other. He’s taking a well-earned hour away from a busy lockdown which has seen him teaching his 1.2million Instagram followers how to play guitar in a series of live tutorials and the completion of his third studio album – the follow up his surprise 2019 E.P., ‘Oh My Messy Mind.’

With the latter sitting somewhere between his award-winning debut, ‘The Chaos and the Calm’ and his 2018 indie-pop about turn ‘Electric Light’, Bay says his latest is his most personal to date. “I think the lyrics and the vulnerability are where I’ve pushed the boundaries the most on this record and it’s a new kind of very personal song-writing,” he says of his third. NME caught up with Bay to hear more about what we can expect from his next album (previewed by new single ‘Chew On My Heart’ arriving tonight), his experiences of working with The Killers’ Brandon Flowers, discovering Tyler, the Creator was a big fan and his thoughts on the plight of grassroots venues in the UK.

You chopped off your hair for your second album and fans weren’t happy. Have they forgiven you?

“It’s the funniest thing. Over the past week or so, in the spirit of remembering live music during this strange time, I’ve been posting some clips from a solo acoustic show I did to reminisce with fans. I posted one of me with an acoustic guitar and very short hair alongside a few more recent ones with my long, lockdown hair. Every other comment on these videos is: ‘Bring back the short haircut! I miss the short hair! Cut the hair!’ I can’t win! All my musical heroes have had hundreds of different haircuts over the years, like David Bowie. Don’t rule out another new hairstyle soon.”

Whilst touring your last album, you met Tyler, The Creator. What happened there?

“I was playing at Lollapalooza in Chicago with my short haircut and my different clothes and my new take on myself as an artist. I stood on stage in front of thousands of people who I didn’t expect to turn up for my set and they all sang ‘Let It Go’ at the top of their lungs and jumped up and down to ‘Pink Lemonade’ – it was crazy.

“I finished the set and sort of got pulled on the shoulder backstage. I turned around and amid a small gang of people this lovely guy pointed at me and said: ‘I saw you on Saturday Night Live, and you were in a pink shirt playing a black electric guitar, and it was just fucking brilliant!’ It was Tyler, the Creator. He kept pointing at me, ‘more, more of that!’ He is such an incredible talent and he’s one of the most important voices in music right now. It was such a massive honour to be recognised by him.”

Will your next album follow a similar style to last year’s E.P.?

“A lot of my drive is rooted in pushing boundaries. I think I did that sonically on the second album because it was so different from my debut. I didn’t think as much about the sonics on the EP: I just tried to strip the songs right back to do something different again. That project was therapy for me. We all go through down moments and I went through one around that time. I needed to work some of that out and express it creatively, so that’s what that EP was all about.

“In contrast, the next album is the most positive thing I’ve ever written. There are still a few moments that have sadness and weigh a little heavily, but it’s mostly uplifting.”

Your new single, ‘Chew On My Heart’, is much more personal in style than your previous work – is that a hint of things to come?

“I’m typically a very private person and this next record is much more personal and vulnerable. My long-term girlfriend and I were just kids when we met; we knew each other before any of this happened to our lives. The album is a bit of a tribute to our journey.”

Is it more of a challenge the more well-known you get to express that vulnerability?

“Yes, I think it’s much harder. The vulnerability has arrived more as time has gone on. In the past, I’d write songs that were somehow kind of rooted in a kind of communal kind of sadness or reality, in a kind of relatable heartbreak. When I started writing this album, I went back to my usual well of sadness and heartbreaks…it wasn’t that it was dry or that it was an empty well or anything – I just couldn’t get inspired there this time.

“I discovered that what I wanted to say was more of a celebration of a long journey I’ve been on – and that I’m still on – with somebody and that’s something I want to sort of shout about in these next group of songs.”

Is it difficult releasing positive songs in this climate?

“I think it’s worth illuminating the moments of joy we find in our lives as often as we can right now. As weird as it is, it’s exciting to have a piece of positivity to put on the table amongst all the difficult stuff.”

How did you feel, returning to record in Nashville?

“I made my debut there and it was so great to return. I love Nashville for its history; I always love to dive into its musicality. I recorded the album in RCA Studio A, right next to the world-famous Studio B where Elvis Presley recorded so many records. But even with Studio A, the history of that room was insane.

“My favourite anecdote is probably when [my producer] told me, probably 25 minutes after I arrived, that the exact spot I was standing on was where Dolly Parton recorded ‘I Will Always Love You’ and ‘Jolene’ on the same day. To record on that hallowed ground was incredible. There was a bit of pressure to make my own record there after hearing that!”

What was it like working with A Star Is Born soundtrack producer, Dave Cobb?

“It was very exciting. He is inspired by the likes of the Gallagher brothers as much as he is by country and Americana. I was told that Dave was a fan of mine and quite keen to do some work together, which was massively flattering. One day in the studio, his assistant walked in with a plaque which read, ‘Seven Million Worldwide’, referring to how many copies of the ‘A Star Is Born’ [soundtrack] had been sold – which was insane. Dave was so humble and not fazed in the slightest by his success.

“One of the scariest things to do with him was to record live and work on gut instinct, which he is a big advocate for. When you do that, you really rely entirely on the moment, the performance, the quality of the playing and the musicians and just the real sort of humanity of the music, rather than the robotic, digital, fancy fun that you can have afterwards.”

You also worked with The Killers’ Brandon Flowers recently too…

“He invited me into the studio and we wrote and demoed a song. The insight I got from working with him was incredible and to be in his presence watching him work and write music the way he does is something I’ll never forget. He is a consummate pro and deserves the legendary status he already has.

“I brought a melody to our session and he said, ‘Fuck, it’s like a straight-up Beatles melody right there’. I was like ‘OK, so Brendan Flowers is comparing a melody I wrote to The Beatles – it was surreal! It was a very cool moment.”

As an artist who got his break through grassroots music venues, how do you feel looking at the current struggles of this industry?

“I wouldn’t have got the chances I did without them and the government needs to recognise the importance of grassroots venues and act…otherwise we’re knackered. The music industry in the 21st century is very online: we’ve seen ‘bedroom artists’ and we’ve seen people explode onto the scene from a blog, a YouTube channel more or less overnight. But at some point in their journey, they need to get onto stage to develop their performance. The industry would fall apart without such venues to cultivate emerging artists, turning good artists into great ones.

“Billie Eilish is somebody who was largely online, making beautifully intricate computer-built music. But we all know, because we’ve seen her at festivals and at live shows over the last year, that crowds go insane in her presence. It’s like watching Nirvana or something. While she was already fantastic online, live, she was extraordinary. Without live venues, we’d have far less exciting artists coming through. We can’t let that happen.”