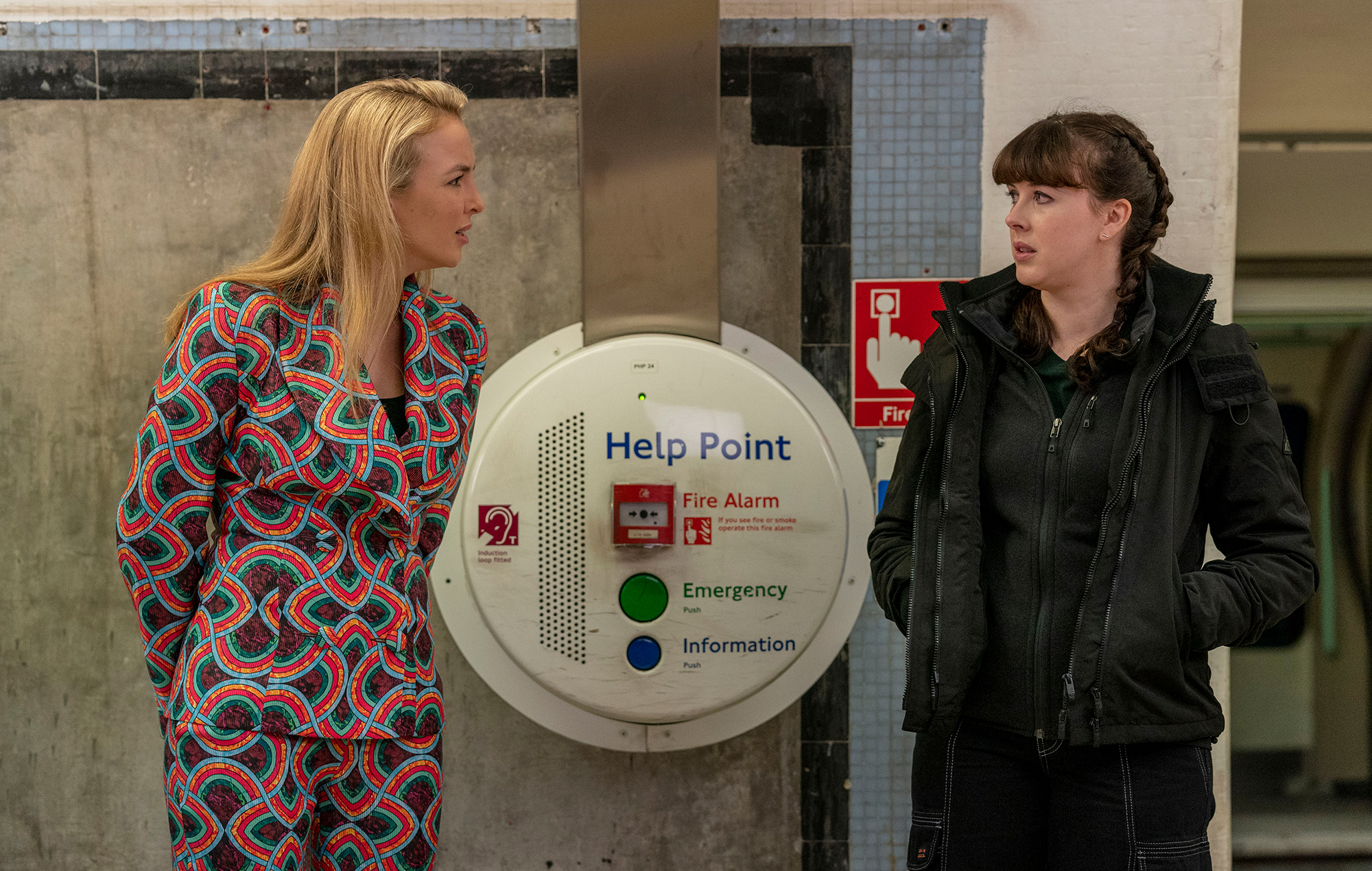 We’ve only got one week left of Killing Eve season three and, aside from the vague answer of The Twelve, we’ve still got no idea who killed Kenny. We edge a little bit closer this week as Eve (Sandra Oh) gets close to Villanelle’s (Jodie Comer) trail and Mo (Raj Bajaj) finds some strong evidence that could take down a colleague – or take his life.

Most meme-able moment: Irina at the Russian detention centre

In episode six, it seemed like Konstantin (Kim Bodnia) and Irina (Yuli Lagodinsky) were going to come good on their plan to run away to Cuba and escape The Twelve and Irina’s future step-dad. But then she decided to leave a parting gift for her mum – the sight of her boyfriend mown down on the front patio. And so, Cuba is off the cards for now and Irina is stuck in a detention centre in Moscow for the foreseeable.

Konstantin comes to visit her and tells her off for ruining the plan. She thinks her stay in the centre is just him pulling “parenting crap” and trying to scare her, and it doesn’t go down well when he tells her he has to leave her there for a couple of days to sort out some things in London. Her response is a perfect combination of intelligence and fiery angst, yelling at him “Go eat a dick!” In Icelandic. A great subtitled new meme for when you want to get your point across in both words and Irina’s furious facial expression.

Now Villanelle’s been promoted to keeper, Dasha (Harriet Walter) thinks she’s going to get to go home to Russia at last and be reunited with her son and stroganoff. The Twelve have other plans for her though – death, namely, at the hands of her very own mentee. The pair head up to Aberdeen for what Dasha thinks is a mission to take out an American businessman while he’s enjoying a spot of golf, and Villanelle lures him into a thicket by acting as a Scottish damsel in distress – or at least someone who can’t find their golf ball.

She keeps up the ruse that she’s going to smash the man’s skull in with her golf club til the last second, swinging at Dasha instead right as he turns around. As the former KGB agent lies prone on the damp ground, Villanelle leans into the man’s face and hisses at him to run away. Given the events of season two’s finale, you’d think she might have learnt by now to check her victims are actually dead before leaving, but she races away assuming her mentor is done and dusted.

As it turns out, she’s not – not even after Eve finds her and stands on her chest, watching her gasp for breath. Somehow, by the end of the episode, she’s back in London and cackling away in her hospital bed next to Konstantin, who’s just had a heart attack.

When she gets Mo’s message that he’s found evidence Paul (Steve Pemberton) is working for The Twelve, Carolyn (Fiona Shaw) is delighted. Minutes later, though, a devastating call comes through – Mo’s been murdered. His boss forgets about the bath she’s been running, leaving it to flood the bathroom and provoke her daughter’s ire. But when Geraldine finds out about Mo and chastises her mother for being “an emotional iceberg”, Carolyn finally lets her frosty exterior thaw and let’s loose on anything breakable in sight. If you’ve ever looked at a glass and dreamed of being able to send it hurtling towards the nearest wall as a way to release some rage without being judged, you’ll relate.

This week’s biggest question: who is Rhian – and how will the new assassin shake up next week’s finale?

At the top of this week’s episode, we’re introduced to a brand new assassin hired by The Twelve, Rhian (Alexandra Roach). She accompanies Hélène (Camille Cottin) to a meeting with Villanelle and sits wordlessly but intimidatingly in the background. The Twelve’s faith in Villanelle seems to be wavering after her last kill didn’t go as smoothly as it should have and it looks like they could be preparing Rhian to take over her spot. Later, while Villanelle is helping Konstantin on his hunt for his money, the new contender for the throne is busy offing Mo.

As this season begins to wrap up, it seems safe to bet the final episode will feature some kind of big showdown. With Villanelle losing her lust for killing, could Rhian take over her duties and finally make the show’s title come true? Or will she get rid of her rival and take her place in her and Eve’s constant game of cat-and-mouse? A fourth season of Killing Eve has already been confirmed – could it take place with a new assassin at the fore?