Setting the Stage: Four bra-exposing lifted t-shirts. Three drag queens. One man in a black leather captain’s hat proposing to his boyfriend, clad in neon green mesh. Pride parade? Mardi Gras? A Tuesday night at Bushwick’s House of Yes? Nay. Just a taste of what was captured and shared on the Barclays Center jumbotron in the moments leading up to Céline Dion’s Brooklyn stop of her massive, year-long Courage World Tour.

As 19,000 rapturous fans waited for the Canadian superstar to take the stage, the DJ offered pop and disco hits—mostly about not being able to stop—be it dancing or loving. (Céline really wants us to live más, as we’d all soon be reminded). And as we grooved, the theme of the night, courage, quickly established itself, what with the flashings and the public declaration of the “Power of Love” and all (shout-out to the newly engaged couple, and blessings to the Courage Cam cameramen).

The palpable excitement was all incredibly warranted. This is the woman who gave us the songs from both Titanic *and* Beauty and the Beast. The woman who holds not only the record for the highest grossing residency of all time (A New Day … in the Las Vegas Strip, which ran for almost five years), and one of the highest grossing tours of all time (The Taking Chances World Tour, ‘08-’09). The woman who once stopped a show to wait for a man to return from a pee!

Taking the Stage: Dion kicked the night off with epic power-ballad “It’s All Coming Back to Me Now” and from there dove straight into 1999 sing-along hit “That’s The Way It Is”. She then took a pause to exclaim, “It looks like I’ve been cloned!” while pointing at a drag queen in the front row dressed exactly like the star that night, in a sleeveless dress approximate to Dorothy’s slippers and blonde bob wig. “One thing that this person has that I do not?” she continued—and gestured to her own chest with a shrug. Introducing the Céline real fans know and love: Céline, the stand-up comedian.

“I just love talking so much. What can I say? I’m the last one of my family, I’m the ‘accident’ of the family. That’s what they used to call me. I’m the 14th one. So, anyway, when I have a chance to talk … I talk,” she said. “I hope you don’t have any restaurant reservations tonight, because I’ll tell ya, you’re gonna be starving. We can fix that. We can order pizza or something. I’ll take care of it.” 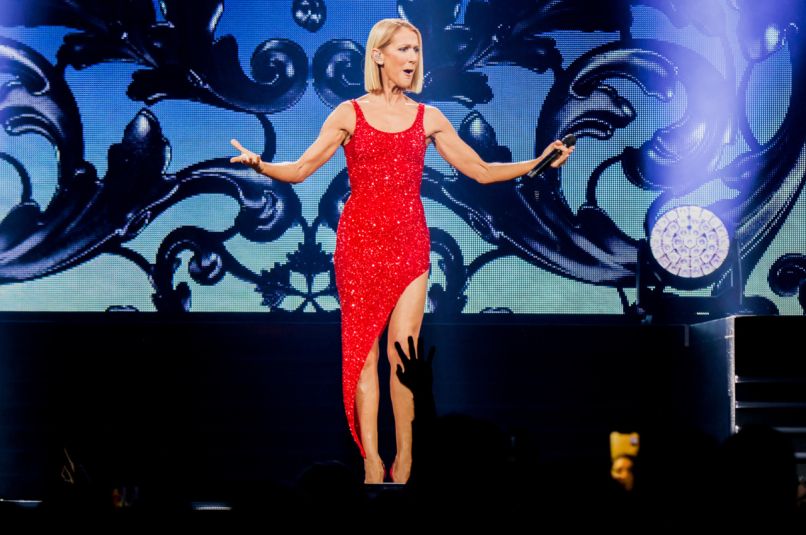 Part over-served kooky aunt at Christmas, part wishful comedian in the early throes of frequenting open mic nights, Dion’s goofiness is punctuated with winks and mic cord twirls and ample “ya know what I’m sayins.” It’s charming as hell and becomes all the more so when she presses pause on the laughs to casually sing both her part and Andrea Bocelli’s part—in Italian—of “The Prayer.”

As she belted out hits of the ‘90s, new tracks, and covers, Dion fed her audience candy of not only the ears but also the eyes with four costume changes following the little red number: a gorgeous floor-length, long-sleeved dress; a sequin disco jumpsuit; a tulle gown with quite the circumference; and a particularly chic take on the tuxedo (featuring a shirt that, on a mere commoner, would but appear a bit as if its wearer was lost in a fitted sheet; on Céline? Très chic). All lewks are courtesy of Law Roach—the “style architect” that recently transformed her sense of fashion into the iconic, Instagram-ready panache we now know and love.

In the jumpsuit, the singer Dionized some of the biggest hits in the pop cannon to close out the pre-encore portion of the night, performing a truly dazzling medley of “Let’s Dance”, “Another One Bites the Dust”, “Kiss”, “River Deep, Mountain High”, and “Lady Marmalade” with her 13-piece band and three backup singers. 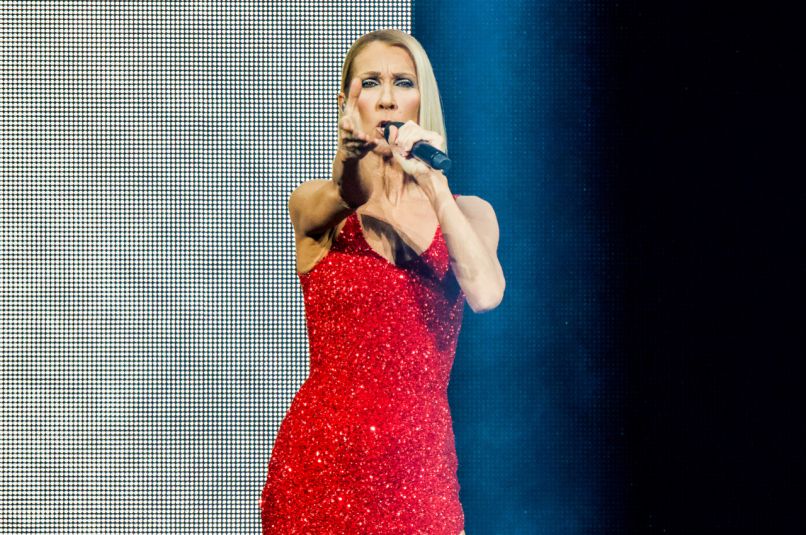 The Heart Must Go On: Camp and comedy aside, the Courage World Tour really is about just that. As Dion sings love song after love song, it’s impossible not to think of the profound loss Dion experienced when her longtime husband and manager René Angélil passed away in 2016. But it’s also wildly inspiring to witness the 51-year-old Dion (“It’s just a number! It’s how you feel that counts!” she yelled at one point in the night—preach) doing what she loves, and what Angélil would’ve wanted her to keep doing: performing.

“Thank you for giving me courage during my darkest moments,” she told the audience, who returned the gratitude with minutes upon minutes of applause after she performed Titanic megahit, “My Heart Will Go On” (in a particularly magical arena moment: surrounded by thousands of cell phone lights and swirl of twinkly light drones that danced around her). She closed the night with a beautiful rendition of John Lennon’s “Imagine”, and left New York City hoping it won’t be another 10 years until she returns.

It’s All Coming Back to Me Now (Pandora’s Box cover)
That’s The Way It Is
I’m Alive
If You Asked Me To (Patti LaBelle cover)
The Power of Love (Jennifer Rush cover)
Love Can Move Mountains
Beauty and the Beast (Alan Menken cover)
You’re the Voice (John Farnham cover)
Tous les blues sont écrits pour toi
To Love You More
Courage
All by Myself (Eric Carmen cover)
Imperfections
The Prayer
Because You Loved Me
Let’s Dance / Another One Bites The Dust / Kiss / River Deep, Mountain High / Lady Marmalade

My Heart Will Go On
Imagine (John Lennon cover)