Morrissey – ‘I Am Not A Dog On A Chain’ review: his best album in years (if you can tune out his opinions)

Home Morrissey – ‘I Am Not A Dog On A Chain’ review: his best album in years (if you can tune out his opinions)
news

The Morrissey Dilemma dovetails with Britain’s wider post-Brexit conundrum: can you ever completely separate views you vehemently disagree with from music you might actually enjoy? The nice liberal rock fan might well balk at 60-year-old Stephen Patrick publicly wearing a pin badge bearing the logo of a tin-pot anti-Islamic political party, but his pointedly titled 13th solo studio album ‘I Am Not A Dog On A Chain’ is an intriguing prospect for even the most wearied Smiths fans.

Significant parts of the album verge on the avant garde, and certainly mark a bold departure for an artist who could easily have continued appeasing his cult faithful with winsome torch songs, ennui-encased indie pop and rapacious rockabilly.

Woker listeners may be appalled that opening track ‘Jim Jim Falls’ urges potential suicides at the Australian waterfall (“If you’re going to jump then jump… If you’re going to run home and cry then don’t waste my time / If you’re going to kill yourself then / To save face – get on with it”). For many Moz fans, this is the equivalent of misdialling The Samaritans and getting through to Piers Morgan. But a man who was once a figurehead for society’s poetic outsiders is now proudly recasting himself as brave truth-teller staring defiantly down the barrel of media crucifixion and cancel culture, saying what ‘everyone’ is really thinking.

“I see no point in being nice,” he asserts on the title track, a classic indie jig resembling the ‘Vicar In A Tutu’ (if the vicar logged on to Twitter using a handle featuring a dozen numbers and a Moscow location). “I use my own brain,” he croons, declaring that “maybe I’ll be skinned alive by [fur coat producers] Canada Goose because of my views”, before attacking the bad old mainstream media: “Listen out to what’s not shown to you and there you find the truth”.

At it happens, there is some pretty startling and adventurous music here. 2017’s ‘Low In High School’ and last year’s ‘California Son’ both dabbled lightly in the synthesised electronics Morrissey once vocally despised, but here he strips characteristically to the waist, smothers himself in Quorn fat and dives in head first.

‘Jim Jim Falls’ embraces Laser Quest electronica, David Bowie’s space rock squalls and synthetic string fanfares, sounding, in parts, like a Vegas residency by early Prodigy. ‘Love Is On Its Way Out’ is an electro-baroque throb redolent of Lana Del Rey or Lorde, albeit filtered through Morrissey’s concern for the death of humanity’s empathy and “the sad rich, hunting down, shooting down elephants and lions”. Single ‘Bobby, Don’t You Think They Know’ berates an unspecified, drug-hungry singer over bursts of ‘90s Garbage electro rock, psychedelic sax solos and choruses of wailing gospel noir from Motown legend Thelma Houston. Playing it safe, both politically and musically, is clearly a thing of Morrissey’s past.

Still, there are reassurances for the Smithsophiles. Johnny Marr-like piano riffs lurk beneath ‘Bobby…’’s electronic quivers and fizzes. The glowering title track is built on the same sort of heel-click rhythms as ‘Frankly, Mr Shankley’ and ‘Girlfriend In A Coma’. ‘What Kind Of People Live In These Houses?’ wittily imagines the sad, dull lives of the suburban sheep to the tune of a classic country folk jangle. That track is bedecked with some prime Moz wordplay: “What carpet-chewer lights up this sewer? / And which rough-trade strangers flail around these chambers?”. ‘Knockabout World’ places one of Moz’s euphoric swells of sunburst victimisation (“They kicked to kill you… They tried to turn you into a public target”) atop icy ‘80s beats reminiscent of Yazoo’s ‘Only You’.

Stop listening there and you’d have an intrepid and near-faultless mini-album that welcomes all flavours of music’s borderless modern age, to which all corners of a Question Time audience could nod along to guilt-free.

Unfortunately, things slacken off sharply in the album’s back end. ‘Darling, I Hug The Pillow’, with its cheesy Mariachi trumpets, stuck-on squelches and Wedding Present-on-downers vibe, goes nowhere slowly. ‘Once I Saw The River Clean’ is what you might get if you programmed a 1970s AI to write a Morrissey song – a tale of walking around a windswept Manchester with his grandmother to buy 20 fags and a T Rex single, getting change from a quid and playing by some graves. And ‘The Secret Of Music’ is nigh-on eight minutes of plodding avant garde crankiness accompanied by disjointed phrases (“I am out-of-tune violin“, “pan-pipes save a life”, “fat bassoon clears the room”). He should have kept that one his hat.

Few giant leaps nail the perfect landing, and Morrissey’s two-footer into full-blown electronica stumbles occasionally. But there’s also plenty of reason to hold your political nose and cross the Twittermob line. You may no longer leap onstage to hug him like a soul mate, but judged on purely artistic terms this is an interesting album. Whether you can separate it from his opinions, dear reader, is one for the darker nights. 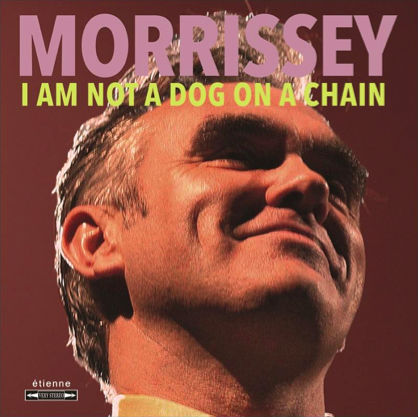 The post Morrissey – ‘I Am Not A Dog On A Chain’ review: his best album in years (if you can tune out his opinions) appeared first on NME Music News, Reviews, Videos, Galleries, Tickets and Blogs | NME.COM.