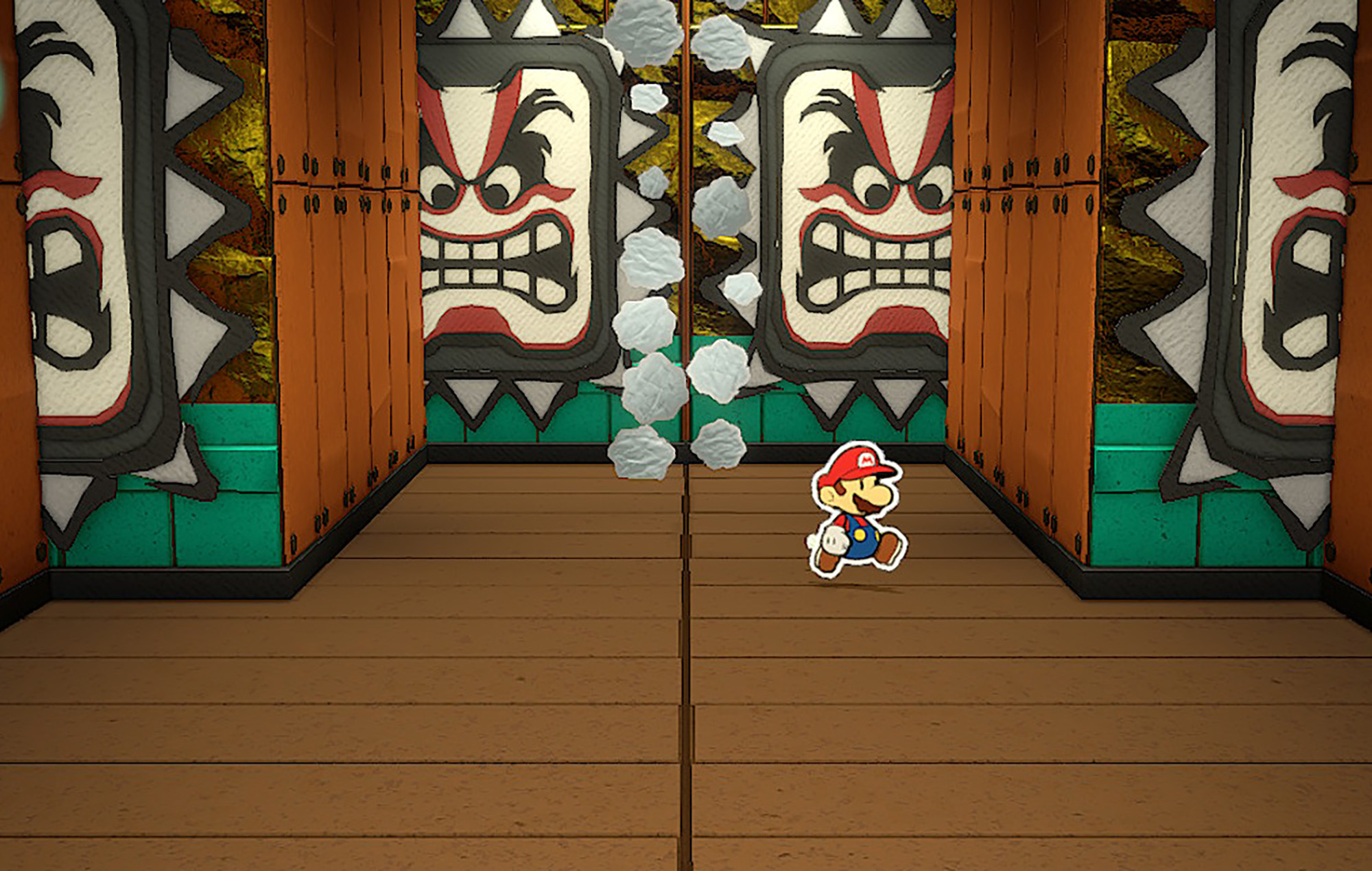 It’s difficult to review any Paper Mario game without discussing The Thousand-Year Door, but – this opening sentence aside – that’s exactly what we’re going to do here. Each Paper Mario game pulls the series in a slightly different direction, so it feels important to judge each entry on what it is, not on how it measures up to a 2004 GameCube game we all loved.

The Origami King is brilliant in its own way. While it definitely has flaws, they seem to be put there by design, although some for reasons that are difficult to understand. It’s not the pitch perfect blend of Mario, world wandering and RPG elements that some fans are desperate for, but it never particularly tries to be. Anyway, if that’s all you want, go and play The Thousand-Year Door again.

Okay, that was the last time.

If you’re unfamiliar with Paper Mario, it takes classic Mario characters and applies a paper aesthetic to them, leaning into the new mechanics this can bring.

There’s the genius “fax travel” instead of “fast travel”, Mario can attack with accordion paper arms, and the enemies are all made of origami rather than the 2D cutout of Mario and his friends. Aside from that, the biggest difference to a regular Mario game is the battle system; that’s also the only serious flaw to The Origami King, but considering how often the battles are used, it quickly becomes a glaring one.

The battles here are fought in a circle, where you can either spin the outer rings or slide sections closer to you in order to group the enemies into clusters to attack them in one fell swoop. It’s a funky idea which fits with the vibe the rest of Paper Mario brings, but it just doesn’t do enough with it. Far too many early battles are too simple, meaning you’re learning the buttons of moving enemies but not really the method.

Aside from adding more enemies or making them harder to group, the battle system never grows either. It’s very unlike Nintendo to phone it in, especially when so much craft has gone into other areas, so you suspect it’s a deliberate choice to keep the battles straightforward.

It makes for a much more shallow learning curve but is also sure to alienate older fans hoping for more in-depth battles that grow in complexity as you understand them, not simple, one-hit KO math problems that only slow down your exploration. They’re too long and often too ea

Within the battles themselves, it gets extremely limited too. You only have two attacks (jump in a line or hammer in a square), and while you can get weapon upgrades, they’re dull, minor and – especially irritating – breakable.

The worst part is, the game actually has a genius battle system inside of it, but only uses it during boss battles. This alternate combat mode creates a maze for Mario, making him explore through a system of arrows while avoiding pitfalls and getting close enough to attack, and has the perfect level of risk and reward.

These battles do take considerably longer and couldn’t effectively replace the basic ones, but it’s still a little frustrating to have the battles be simultaneously one of the best and one of the worst things on offer.

Also, one of the bosses is a tin of pencils. Pencils! What more do you want?

The regular battles are the only real downside of this adventure, and if you can either avoid the enemies in the hubworld or have great spacial awareness, you’re not likely to get too bogged down by them. They’re not even bad, per se, but compared to the rest of the game they’re a notable weak spot.ince new battle systems are what Paper Mario has always been about beneath the crate paper, they deserve special attention.

While I found myself actively avoiding battles – there’s no XP – that’s a comment on how wonderful the rest of the game is as much as it is an indictment of the battles themselves. I’ve played a lot of different Mario games over the years, and this might genuinely be the best written one ever.

The story is entertaining enough, but the real magic comes from the characters and dialogue. Though there’s few actual “jokes”, all of the characters have an incredibly dry sense of humour and impeccable timing with the deadpan delivery fitting perfectly with the paper aesthetic. Packed with references to Mario, Nintendo and video game tropes, it’s got the cheeky smirk sort of humour mixed with full-on laugh out loud lines. It all feels like a Sarah Silverman sketch – but family-friendly, of course.

Olivia, your new companion, is the star of the show, but her success only serves to highlight the lack of characters on offer. The game largely plays safe, overloading you on Toads and keeping the other cast either in bit part roles – even Luigi suffers this fate – or cutting them entirely.

The world-building too deserves a special mention. While the first world is just an enchanted forest, subtle details and whispers give it an unsettling, Midsommar vibe, especially combined with the paper body horror of the prologue. From then on though, it swings for the fences, with the high point (figuratively and literally) being a skyscraper theatre in the middle of a samurai theme park – who needs Ghost Of Tsushima anyway – where Mario is in the spotlight. Combined with the platforming features and occasional open-world battles, the game seems to rebel against its categorisation as an RPG, but can’t quite make the final leap.

Ultimately, The Origami King is a glorious experience and the perfect gaming getaway where the flaws seem largely by design. The battle mechanics will likely be your biggest gripe unless this is your first RPG, but at least the complaint about characters is offset by the top-notch writing. It’s not good enough to crack the list of all-time great Mario games, but it’s probably the funniest.

‘Paper Mario: The Origami King’ is available now on the Nintendo Switch.

Paper Mario: The Origami King’s weaknesses are entirely predictable, but for the most part are heavily overshadowed by what the game does right. You’ll find yourself avoiding and resenting battles, but only because you’ll be desperate to dive back into the papery world Nintendo has created here.

The post ‘Paper Mario: The Origami King’ review: Not quite an RPG, but a classic Mario adventure appeared first on NME Music News, Reviews, Videos, Galleries, Tickets and Blogs | NME.COM.