PERIPHERY will play an instrumental set tonight (Saturday, February 15) at The Fillmore in Silver Spring, Maryland after the band's lead vocalist, Spencer Sotelo, was taken ill with "a severe case of laryngitis." The progressive metallers kicked off their "We Come For Tour" U.S. run of dates on January 30 in San Francisco, California and are scheduled to play the last show of the trek tomorrow night (Sunday, February 16) at Brooklyn Steel in New York City. Earlier today, PERIPHERY released the following statement via social media: "To our great fans coming out to the show in Silver Spring tonight, we're very sorry to report that Spencer is suffering from a severe case of laryngitis. As a result, he will be unable to sing. However, the show will go on as scheduled with the rest of the band performing the set instrumentally. We promise to bring all of the same energy and fun you've come to expect from our shows, and we look forward to a great night of music!" PERIPHERY's latest album, "Periphery IV: Hail Stan", was released in April via the band's own 3DOT Recordings. PERIPHERY is Jake Bowen (guitar, programming), Matt Halpern (drums), Mark Holcomb (guitar), Misha Mansoor (guitar, programming) and Sotelo. "Periphery IV: Hail Stan" marks two significant firsts for the band: the first PERIPHERY release on 3DOT Recordings, as well as a change in the way they approached writing and recording. "We finally spent a year on a record," explained Bowen. "We've never been able to do that. The quality and pacing of the work show we took our time with this one. That's an important note about this. We really got to do everything we wanted to do in the space we had to do it." Mark added: "I think you can hear the adventurous intent behind much of this material as a result. We're all the happiest we've ever been with a release, and it's no coincidence." "Periphery IV: Hail Stan" is the first release to follow the band's 2017 Grammy Award nomination in the "Best Metal Performance" category, for "Periphery III: Select Difficulty" album opener "The Price Is Wrong". Photo credit: Travis Shinn

To our great fans coming out to the show in Silver Spring tonight, we're very sorry to report that Spencer is suffering... Posted by Periphery on Saturday, February 15, 2020 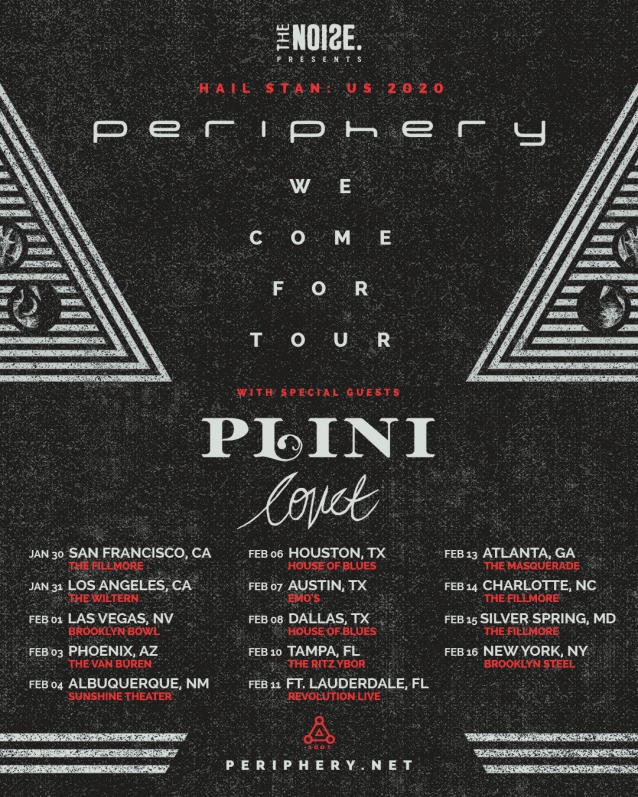