German hard rock icons Scorpions will release an album of their greatest rock ballads next month.
Titled ‘Born To Touch Your Feelings’, the best of compilation features 17 of Scorpions’ finest rock ballads from their five-decade history including two brand new tracks.
Ahead of its release on Friday 24th November, Scorpions have launched an incentive on social media to get fans to unveil the album artwork.
The band explain on their official website: “Post a picture on Instagram with the Hashtag #BornToTouchYourFeelings now. The more pictures posted with the official album hashtag the sooner you will reveal the brand new Scorpions cover. All your pictures can be found in the social wall on this website.”
At the time of writing the album artwork.
The exact track-listing is also yet to be revealed but expect to hear anthems like ‘Wind of Change’, ‘Send Me An Angel’ and ‘Still Loving You’. 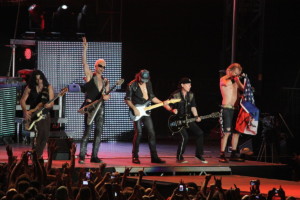 Explaining how the project came about, singer Klaus Meine told SiriusXM last month: “Sony Music approached us and said, ‘C’mon, guys. You have so many powerful songs. And we wanna put it together in some kind of compilation you guys never did before.'”
Of the bonus tracks, he said: “We went in the studio and everybody came up with great ideas. We just finished a recording session and listened to the first mixes and stuff, and it sounds pretty good. It’s gonna be a ‘best of ballads,’ but with those new tracks. And it’s gonna be a cool project.”