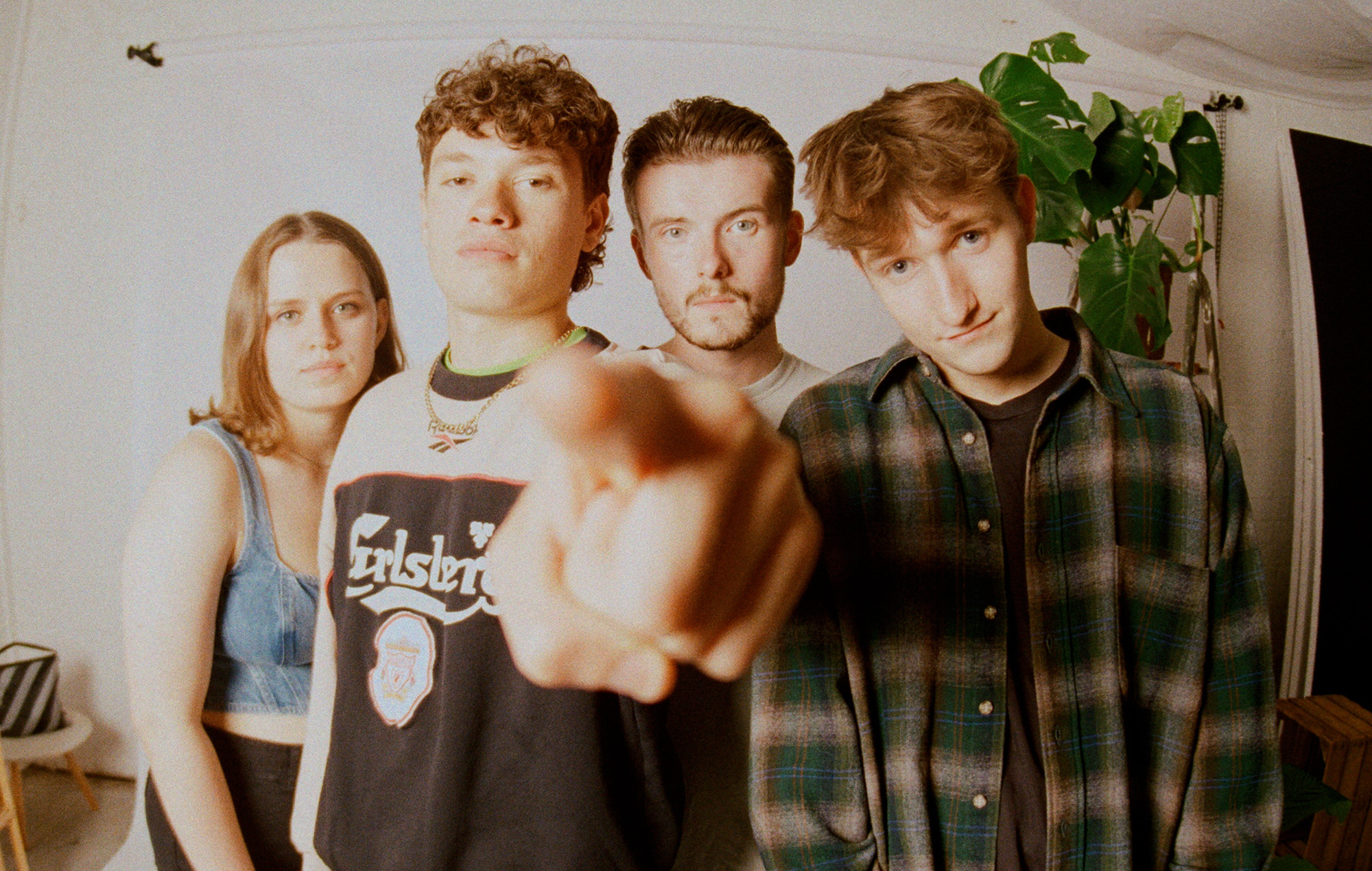 There’s no time for formalities during STONE’s home turf show at the O2 Academy Liverpool. During the pounding intro of set opener ‘Keep Running’, frontman Finlay Power has launched himself over the barrier and started a frenzied moshpit. It’s the perfect introduction to the Merseyside Gen Z punks, who’ve exploded onto festival stages this year with raucous anthems that cut through a sea of guitar-wielding contemporaries.

Meeting NME a few hours earlier proves no easy task. It’s Friday night and the city centre bars are already booming, but when we eventually find a seat outside a back street bar, he cuts a more reclined figure alongside drummer Alex Smith. Both are refraining from beer in the knowledge that they have a long drive south for the Isle Of Wight Festival looming the minute they’re off stage. It does well to sum up the packed schedule the band have had since lockdown restrictions eased, but Smith insists that they’re loving every minute: “Until now we’ve had no reference to a fanbase, so to be on the road and have places bouncing has been insane.”

He makes a good point. The band broke through with their 2020 single ‘Leave It Out’; a visceral slice of post-punk, it makes a thrilling backdrop for Power’s seething Scouse delivery: “So you got your eyes on your ex-girl’s social media / That’s fine mate but I promise it ain’t healing ya.” He says the lyrics – which were penned outside Liverpool’s dive bars – came to be a huge turning point for STONE. “It was an absolute eruption of energy and we carry that into the live show – we were desperate to get out and play.”

Pre-lockdown, their previous band The Bohos had reached a natural end. Power says there was a growing urge to move away from their classic indie sound, and to cut loose from the weight of his father, John Power, a member of Merseyside legends The La’s and frontman of Cast. “I felt like I was either something I wasn’t, or I was John Power’s son,” he says. “I knew that something new was coming though; I was writing these spoken word songs, and they felt more like me – and then STONE started in 2019. It was an evolution.”

Finding such moments of clarity before a global pandemic was far from ideal. Tonight, though, you can’t help feel that being caged inside for a year has intensified the magnitude of the show they put on. Power spends as much time in the crowd as he does onstage, spitting bars out in the middle of a circle pit, with a sickly smell of cheap shots hanging heavy in the air. There’s a depth and substance beyond the confrontational and direct lyricism; tracks like ‘Let’s Dance To The Real Thing’ and ‘Stay Silent’ offer up a more melodic and versatile side – there’s still that thrashing bite, but they carry sprawling melodies.

Scenes were similar at their triumphant Reading & Leeds sets this summer. Footage shows Power’s camouflaged trousers flung high above the crowd, as he surfs across waves of feral hands. They made such an impression that word of his antics got through to Reading Festival staff before they’d even arrived on-site, with security threatening to pull their show if there was a repeat of the previous day’s carnage at Leeds.

“Reading & Leeds was one off the bucket list. To play a show at such a historic festival was important to us,” he says. “During lockdown, I felt like my dreams were withering – then to step onstage and have such an amazing turnout… it was surreal.”

Off the back of the set, STONE were asked to open Yungblud’s tour, which will see the band play some of the biggest venues they’ve taken on to date, including two huge hometown shows at Liverpool’s Mountford Hall. Needless to say, they’re ready to seize the opportunity with both hands. “Yungblud’s fans will be queuing from 10am, so we know there’s going to be a bunch of people dying to absorb new music,” he says. “We’re going to cater for them. I’ve always said that I want to be an underground voice for the lost youth, and I feel like Yungblud is doing that on a much larger scale.”

As Yungblud embraces his regional identity much like STONE, there’s a clear mutual respect between the artists. “You don’t get British superstars like him these days. When I first saw Yungblud, I was like, ‘Woah, this is a bit overwhelming!’. But when you see him live, you just get it – the kid is a rock star, and there’s not many of them left.”

Looking ahead, STONE’s focus is all on their live shows. Power says: “I just need to get in front of those crowds – it’s all about the live performance for us. Put me in a room with anyone and I will convert them all to fall in love with the band.” They’re confident words, but after their show tonight, you’d struggle to disagree with him.

STONE are currently supporting Yungblud on his UK tour dates