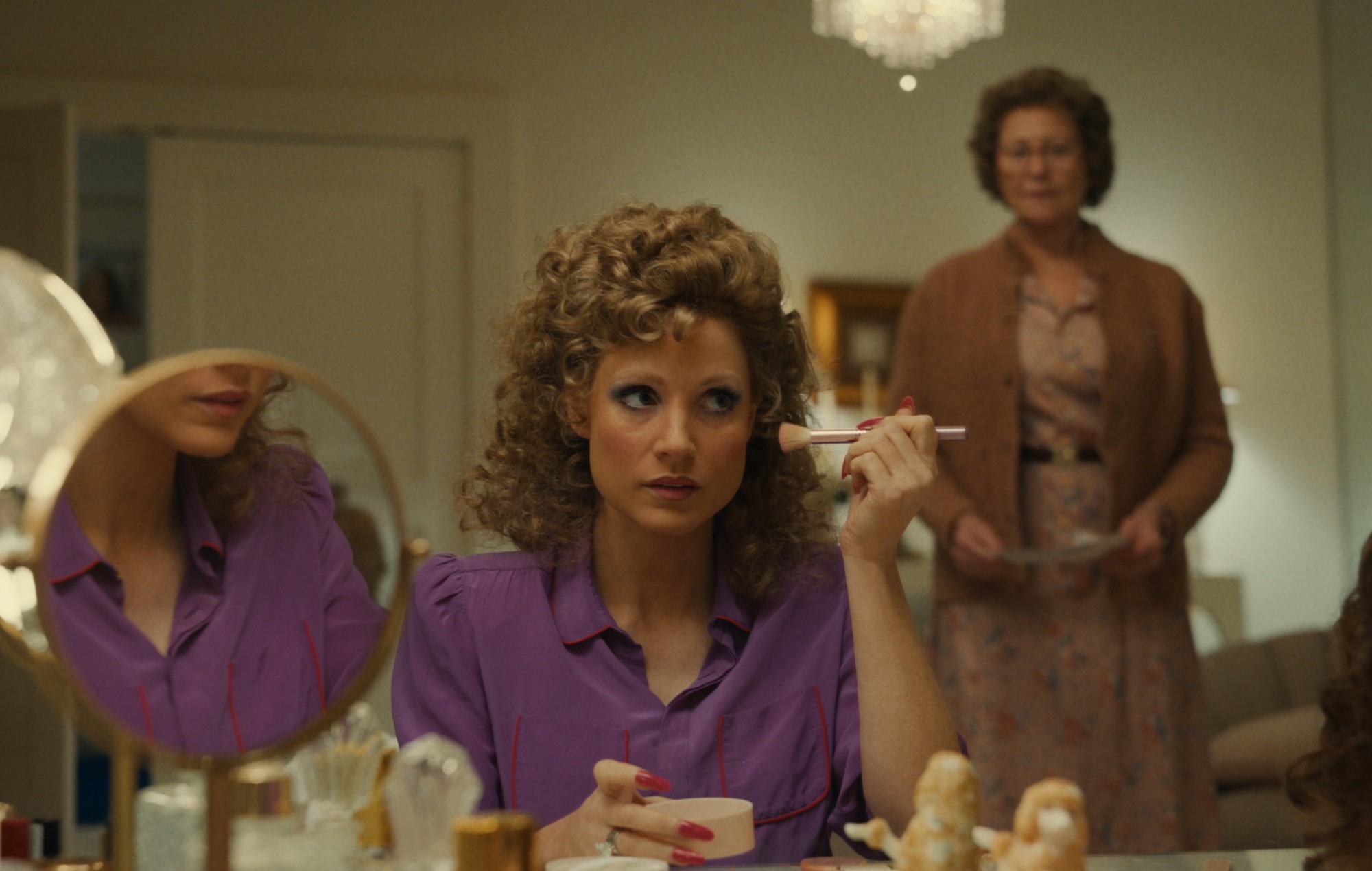 This film begins with a close-up of Tammy Faye Bakker (Jessica Chastain) in full, gaudy war paint. A makeup artist gently suggests that Bakker, a semi-disgraced televangelist on the comeback trail, might want to strip things back to a more natural look. With her usual firm perkiness, Bakker politely replies that there’s a limit to how stripped back she can go. Her eyeliner and lipliner are tattooed on for convenience, and her garish false lashes are non-negotiable. “That’s my trademark, and if I take my trademark away, then it’s not me,” Bakker says matter-of-factly.

Bakker actually said that line in the fascinating documentary this film is based on: 2000’s The Eyes of Tammy Faye, which was narrated by RuPaul and directed by future Drag Race creators Fenton Bailey and Randy Barbato. Sadly, despite this showy opening, director Michael Showalter (The Big Sick, Wet Hot American Summer) seems unwilling to embrace the high camp that really should be central to Bakker’s story. After her Christian TV career crumbled in the late ’80s, the LGBTQ+ community paved a road to redemption for Bakker, who acknowledged as much in her final interview. “When we lost everything,” she said shortly before she died of cancer in 2007, “it was the gay people that came to my rescue, and I will always love them for that.”

Showalter’s film may be cautious, but this doesn’t mean it’s dull. Abe Sylvia’s screenplay efficiently traces Tammy Faye’s remarkable journey from a poor and oppressively religious upbringing in Minnesota – at first, she isn’t allowed in church because she reminds the parishioners of her mother’s divorce – to fabulous TV fame. After marrying Jim Bakker (Andrew Garfield) at bible college, the couple hit the road as travelling preachers with a message sneered at by Tammy Faye’s fun-sponge mum (Succession‘s Cherry Jones): God is good, but so is making lots of money. Aided by heaps of makeup that the real-life Tammy Faye would have loved, Chastain conveys how Bakker’s endearingly extra personality translated perfectly to the histrionic world of ’70s televangelism. It’s a tremendously skilled and sympathetic performance that you’ll want to drink in the way Tammy Faye knocks back her endless cans of Diet Coke. Garfield captures Jim Bakker’s charisma, but never really gets under the skin of a deeply hypocritical man destroyed by his own greed.

The Eyes of Tammy Faye doesn’t really grapple with his wife’s culpability in their demise, either. She always maintained she had no idea her husband was frauding their audience on a grand scale – and stood by him as the scandal became national news – but Tammy Faye was clearly no pushover. One of the film’s most affecting scenes is a recreation of her empathetic 1986 interview with Steve Pieters (Randy Havens), a man she introduces without judgment as “an AIDS patient”. Given that President Ronald Reagan had only publicly acknowledged the disease a year earlier, this was a genuinely bold display of kindness from a woman whose wealth and fame were predicated on appealing to some of America’s most conservative viewers. Showalter’s film gives Bakker a sentimental but effective final act, but never fully explains why this flawed but enormously warm human being became an unlikely icon.