The Hunt is back on. Universal Pictures has today announced a new release date for Blumhouse’s previously canceled horror-satire that stirred controversy ahead of its intended fall premiere. Now set to debut March 13thin 3,000 theaters, the film has also been given a fresh trailer and poster, both of which seek to clarify and play into the contention it’s caused.

To refresh, The Hunt comes from director Craig Zobel and writers Damon Lindelof and Nick Cuse. It depicts a group of average right-wing individuals (including eventual heroine Betty Gilpin) who are seemingly kidnapped by a group of wealthy liberal elite (led by Hilary Swank) to be hunted for sport. Originally planned for a September 27th release, the film ended up getting pulled following mass shootings in El Paso, Texas and Dayton, Ohio.

Conservative media also took aim at the movie sight-unseen, labeling it a dangerous act of Hollywood liberalism that glorified the killing of conservatives. The unimpeachable Reality Show Host in Chief Donald Trump even had words for the movie, tweeting out,

“Liberal Hollywood is Racist at the highest level, and with great Anger and Hate! They like to call themselves ‘Elite,’ but they are not Elite. In fact, it is often the people that they so strongly oppose that are actually the Elite. The movie coming out is made in order…. to inflame and cause chaos. They create their own violence, and then try to blame others. They are the true Racists, and are very bad for our Country!”

Now, speaking with The Hollywood Reporter, Lindelof has lamented that while understandable, the controversy was ill-targeted. “We really don’t want to be pointing fingers, and more importantly, we don’t want to be wagging fingers at anyone for overreacting or reacting incorrectly,” he said. “We just felt like the movie was being misunderstood.”

Producer and Blumhouse founder Jason Blum noted that test screenings that occurred after the tragic shootings received positive responses. “It was read as a satire, no different from The Joker or other movies that are violent,” he told THR. “It was read as a movie that didn’t take sides… The audience is smart enough to know that what they’re seeing is a satire and it’s preposterous.”

The new advertising material for the film leans into all of this, while also highlighting the fact that the actual details of the story weren’t highlighted in early promos to avoid hinting at twists. “The last I heard, free speech still exists,” says Swank’s character, to which J.C. MacKenzie’s character responds, “Don’t First Amendment me.”

“It wasn’t real,” replies Swank, essentially the voice of the filmmakers at this point. “We were joking.”

In the next scene, Swank’s character addresses Gilpin’s Crystal: “You actually believed we were hunting humans for sport… You wanted it to be real, so you decided it was.”

There are a number of other lines in the trailer that seem to spoil some of the plot points Blumhouse and Universal were probably hoping to keep under wraps. While it’s a bummer controversy ruined the surprises for cinema fans, all the hubbub may actually play into The Hunt’s favor. “The most talked about movie of the year is one that no one’s actually seen,” reads the new one-sheet’s tagline, surrounded by blurbs of news coverage about the movie. “Decide for yourself.”

Don’t mind if I do. Watch the new trailer and see the new poster for The Hunt below. 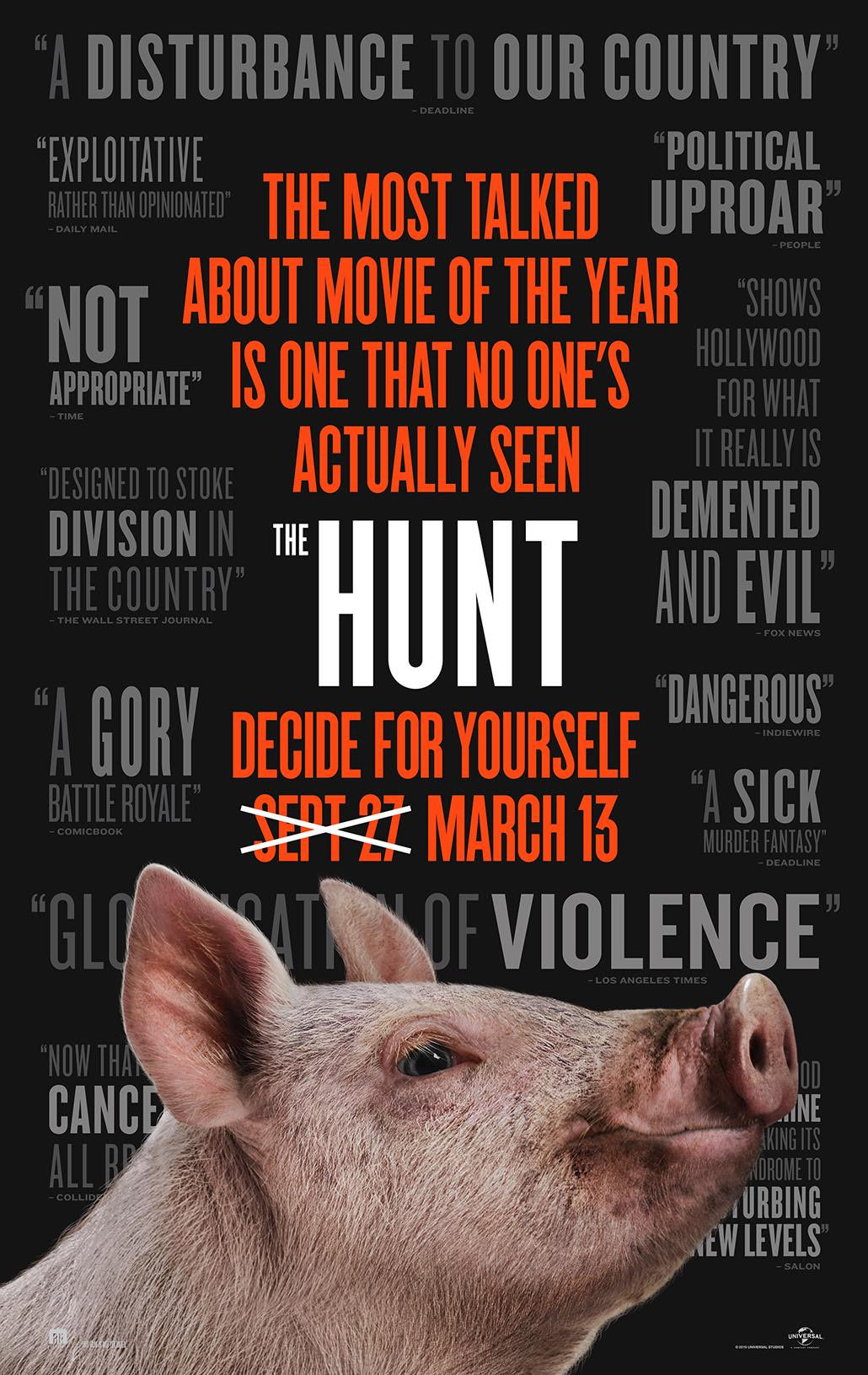