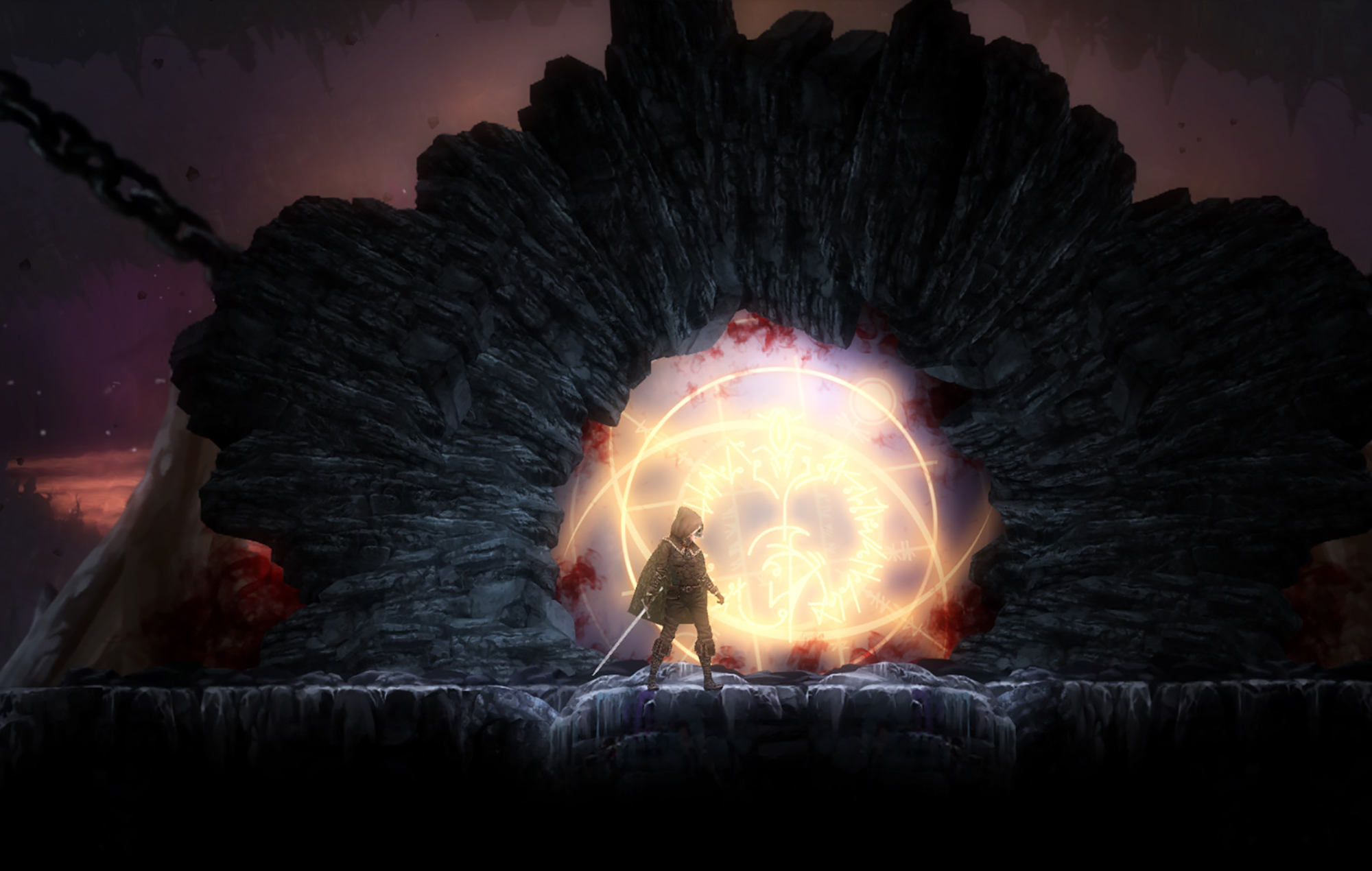 Vigil: The Longest Night is full of my favourite gaming things: Solitude. Mystery. Discovery. Its truths are deeply buried, teased out only by the curious and tenacious explorer. Labyrinths of caves hide underfoot, waiting to be stumbled into through overgrown passageways. Excursions to the unknown see you re-emerge into the cold moonlight more empowered, and more burdened with the knowledge of a diseased world.

It’s fascinating – I couldn’t stop playing. And when I’d finished, so much remained unfound, inviting me back in.

Vigil’s enigmatic pull draws on a range of well-worn touchstones. The tantalising item descriptions on its loading screens give it away as yet another game in debt to From Software’s Dark Souls. Except, more accurately, its direct inspiration from is the accomplished but largely forgotten Salt & Sanctuary, an early 2D interpretation of Souls, although its tone and plot converge more with From Software’s other modern classic, Bloodborne.

These games share a deft ability through lore and level design to dangle shiny objects in the oppressive gloom, just out of reach, forcing you deeper. Vigil understands the hold they create over players. It’s a master of the same magic.

It starts from the game’s rural setting, at moments beautiful with its gushing waterfalls and cobbled cottages, yet always clouded by eldritch terror. Locations are constructs of painted paper cut outs, layered up so you peel back the surface to reveal grim details of blood rituals and betrayed faith. Characters shift like enchanted mannequins, facing off against animated corpses and ravenous abominations. A score of melancholy piano and dramatic violins completes the sense of a cursed fairy tale.

Its protagonist Leila is a vigilante, a sort of protector who left her village as a child to begin her training and returns years later at the behest of her twin sister. The land has been plunged into an endless night of squalor, depravity and otherworldly horrors. Frightened villagers vaguely prompt you to investigate the disappearance of a local girl, and seem pleased to leave this and other requests in your capable hands.

Depart and you’re plunged alone into a foreboding landscape linked by a cat’s cradle of shortcuts, loops and bridges. After the opening act, the game webs out massively, abandoning to your own devices once more, armed only with a handful of leads. I threw myself into it. Hours passed as I uncovered new places, routes, monstrosities, gear, spells, pieces of the puzzle and more. It doesn’t end, it just snakes around until it punches another entrance into a place you’ve been before, by which time you’ve got fresh abilities that open another path forward.

The RPG systems and action almost seem secondary to the exploration, but they’re crucial to the intrigue. Each of the four weapon types – twin daggers, swords, heavy clubs and bows – has an accompanying skill tree that allows you to tailor your style of play. For example, a sword build could focus on block and parry or more acrobatic dodges and strikes. Also, every weapon and piece of armour you unearth has a distinctive identity, which makes it an exciting acquisition, and can be upgraded to stay relevant throughout the game.

Naturally, the wilds and dungeons are packed with deadly creatures and traps – getting hit hurts, but it’s not too tough to dodge-roll through most attacks. Alternatively, you can fire from distance against the fastest enemies. It doesn’t take long to unlock powerful combos and special moves, giving you plenty of options in tricky situations. Playing on Normal difficulty, I found that, while everything can potentially kill, for much of the game surprise and complacency were the biggest threats. Even some bosses, as fearsome as they look, turned out to be fairly trivial.

Vigil’s only real weakness is that technically it’s a little crudely bolted together, leaving some nasty jagged edges. Some issues, such as translation mistakes or abrupt music transitions, can add to the atmosphere of unease. But the Nintendo Switch version I played was also plagued with long loading times and a juddering frame rate. Worse, it crashed over a dozen times during my journey, and thanks to a quirk in the slightly old-school save system, meant often repeating chunks of play. Hopefully, a promised day one patch will at least eradicate this problem, but beware.

If these faults tainted my experience, though, they weren’t close to ruining it. Taiwanese developer Glass Heart Games has produced an incredible debut. Vigil’s ability to endlessly build and satiate the appetite for unguided adventure is irrepressible. It’s a testament to its craft that even if it follows an old formula, you never really know what’s round the next corner. And you have to know.

‘Vigil: The Longest Night’ is out now for Nintendo Switch and PC.

Vigil: The Longest Night lacks a little originality and technical polish, but every aspect of its design is outstanding; everything from the unsettling atmosphere to the pleasing combat is expertly intertwined. Getting lost in the layers of its grim fantasy is one of the year’s gaming highs.