Fan-filmed video of LAST IN LINE's March 26 performance at RISE Rooftop in Houston, Texas can be seen below. LAST IN LINE recently inked a deal with earMUSIC, the recorded music label of German entertainment group Edel AG which boasts a roster of global artists including DEEP PURPLE, Alice Cooper, BABYMETAL, THUNDER, STATUS QUO and many more. A new EP from LAST IN LINE will tentatively arrive later this year, following by the band's third full-length album. The news of LAST IN LINE's partnership with earMUSIC was shared two months ago by the band's drummer, Vinny Appice, during a appearance on "Waste Some Time With Jason Green". Vinny also revealed that LAST IN LINE completed recording six more new songs in late January at Danny "Count" Koker's Desert Moon studios in Las Vegas, Nevada. Formed in 2012 by Appice, bassist Jimmy Bain and guitarist Vivian Campbell — Ronnie James Dio's co-conspirators and co-writers on the "Holy Diver", "Last In Line" and "Sacred Heart" albums — LAST IN LINE's initial intent was to celebrate Ronnie James Dio's early work by reuniting the members of the original DIO lineup. After playing shows that featured a setlist composed exclusively of material from the first three DIO albums, the band decided to move forward and create new music in a similar vein. LAST IN LINE's debut album, "Heavy Crown", was released in February 2016 via Frontiers Music Srl, landing at No. 1 on Billboard's Heatseekers chart. Initially, the release had been preceded by tragedy when Bain unexpectedly died at the age of 68 on January 23, 2016. LAST IN LINE, honoring what they knew would be Bain's wish to keep the band moving, brought in Phil Soussan and committed to sustained touring in support of the album before beginning work on the follow-up release, 2019's "II", which was also made available through Frontiers Music Srl. Last June, Soussan spoke to Metal-Net.com about the progress of the writing and recording sessions for LAST IN LINE's third album. "I've been quite motivational with the band," Phil said. "I'm trying to keep things happening. We wanted to work on a few different aspects [during the pandemic]. And we also had to go about getting a new record deal — we were changing labels — so that's something we're in the process of doing, and we're getting pretty close now. But part of that was writing a third record. So we've been hard at work trying to write a third record and even record that third record while we've been in different locations around the world. And, obviously, this band works as a unit in every sense of the word, so it's a real handicap not being able to be in the same room as everybody and trying to make it happen." In February 2021, Appice told Metal From The Inside that former DOKKEN and current FOREIGNER bassist Jeff Pilson, who produced both "II" and "Heavy Crown", is not involved with the upcoming LAST IN LINE album. "We made a change," he said. "Actually, the guy who mixed the last record, Chris Collier — he's great; he's working with KORN — he recorded this record. And we're kind of producing it ourselves, between all of us. "Jeff is great — Jeff's a great producer, and [he has] great ideas and stuff, but we just felt that we could probably do what we wanna do now that we're a band, we've been on the road, and we know what we wanna hear," he explained. "But it's coming out great. The stuff sounds fantastic. "And yeah, I've been through a lot with Jeff Pilson. I've known him for years. He's a great guy. He's like my brother." Also in February 2021, Soussan told the "Pat's Soundbytes Unplugged" podcast about the musical direction of the new LAST IN LINE material: "The songs are another progression from the last album — the difference between 'Heavy Crown' and 'II', and now 'II' and whatever this next album is gonna be called; we don't know yet, by the way. But it's definitely evolved even more; it's gone into even more of an evolution, but we are always trying to keep the characteristics of LAST IN LINE there. I mean, you can't shake those things — you can't shake Vinny's drumming, you can't shake Vivian's playing. And I'd like to say the same thing about myself, and, of course, Andrew." Some of the early recording sessions for LAST IN LINE's third album took place in January 2020 at Steakhouse studio in North Hollywood, California. 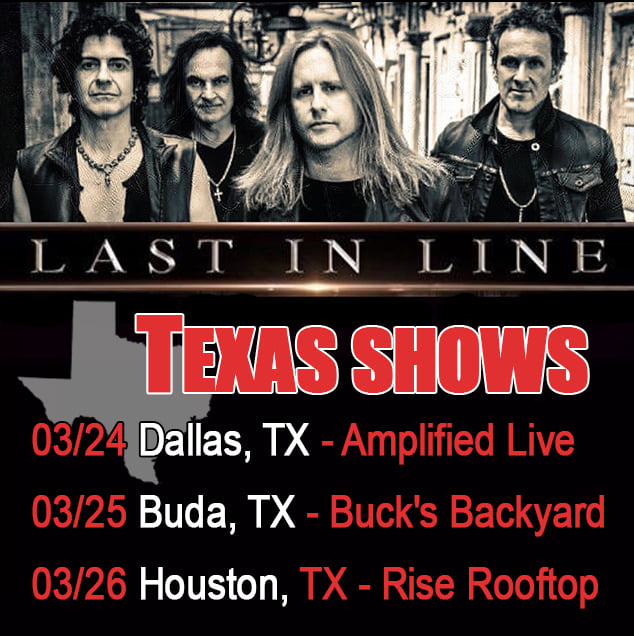