Alice Cooper has announced a summer/fall 2022 "Detroit Muscle" U.S. tour. After wrapping successful and uninterrupted fall 2021, and both winter and spring 2022 runs, and following a European tour May 23 through July 6, the legendary rocker will be back on the road in September. There is a mix of headline shows and festival appearances on his docket. The VIP pre-sale is set for Tuesday, April 12 at 10 a.m. local time. The general public on-sale takes place Friday, April 15 at 10 a.m. local time. Cooper, a Rock And Roll Hall Of Fame inductee, usually spends up to six months a year on the road, bringing his iconic brand of rock psycho-drama to fans both old and new, enjoying it as much as the audience does. Known as the architect of shock rock, Cooper (in both the original ALICE COOPER band and as a solo artist) has rattled the cages and undermined the authority of generations of guardians of the status quo, continuing to surprise fans and exude danger at every turn, like a great horror movie. Alice Cooper concerts remain a "not-to-be-missed" attraction! Alice's universally acclaimed 2021 album "Detroit Stories" is available via earMUSIC. The record, a celebration of the sound and spirit of the Golden Era of Detroit rock, debuted on the Billboard sales chart at No. 1 upon release in February 2021. The Associated Press called "Detroit Stories" "a masterpiece of classic rock, soul and R&B in homage to the city that produced him," while Entertainment Weekly proclaimed the release "a love letter from Cooper to his city, and one that encourages a deep dive into his own back catalog and that of his peers." Variety deemed the album "a delicious tip of the hat to '70s classics such as 'Killer' and 'School's Out' without sounding like a throwback." Rolling Stone enthused, "That spirit of rock & roll abandon still exists in Cooper's music half a century later, and his inherent showmanship is why people still fill theaters to see his guillotine act. It's also why his records are still fun to listen to: You never know where he's headed." Cooper's summer/fall 2022 U.S. tour dates: Sep. 07 - Bethlehem, PA - Wind Creek Event Center Sep. 09 - Alton, VA- Blue Ridge Rock Festival Sep. 11 - Windsor, ON - The Colosseum @ Caesar's Sep. 13 - Buffalo, NY - Shea's Buffalo Sep. 14 - Binghamton, NY - Visions Arena Sep. 16 - Albany, NY - The Palace Theater Sep. 17 - Atlantic City, NJ - Tropicana Casino & Resort Sep. 18 - Wallingford, CT - Toyota Oakdale Theatre Sep. 20 - Muncie, IN - Emens Auditorium Sep. 21 - Grand Rapids, MI - DeVos Hall Sep. 22 - Hammond, IN - The Venue @ Horseshoe Casino Sep. 24 - Louisville, KY - Louder than Life Festival Sep. 25 - Chattanooga, TN - Soldiers and Sailors Memorial Auditorium Sep. 27 - Memphis, TN - Orpheum Theater Sep. 28 - St. Louis, MO - Stifel Theatre Sep. 30 - Cedar Rapids, IA - Paramount Theater Oct. 01 - Springfield, IL - Bank of Springfield Center Oct. 04 - Loveland, CO - Budweiser Event Center Oct. 06 - Prescott Valley, AZ - Findlay Toyota Center Oct. 08 - Las Vegas, NV - [to be announced] This past January, Alice revealed during an appearance on an episode of SiriusXM's "Trunk Nation With Eddie Trunk" that he is working on two albums right now. "All I can say is that one is written — totally written — and we'll be doing bed tracks for that one pretty soon," he said. "And then the other one is just a touch in the future, but that's being written right now too. They're two entirely different kinds of albums, but they're Alice Cooper pure rock and roll albums. The two albums will really be hard rock albums." Also in January, Cooper guitarist Nita Strauss told Detroit's WRIF radio station that she and her Cooper bandmates "recorded quite a bit of music" for his upcoming album. "The band did also have a huge part in the writing this time, which is the first time that's happened in the eight years that I've been in the band," she said. "So it was really, really fun — really exciting for us to get to work with a legend like Bob Ezrin. [It was] a huge, huge honor to be in the studio with him and Alice creating what we hope will be some more Alice Cooper music to just add to his legacy." She added: "I'm on the [Alice Cooper] live DVD. I'm on the live album releases, the live tracks that are bonus tracks and stuff, but [this is my] first studio album with Alice. I'm actually the only person in the [current lineup of Alice's] band that hasn't recorded anything with Alice before, so this is huge for me. [I'm] very, very honored." Released in February 2021, "Detroit Stories" was recorded with Ezrin, mostly in Royal Oak with Detroit musicians and featuring a mix of original material alongside covers of songs by Bob Seger, the MC5, Mitch Ryder's DETROIT and OUTRAGEOUS CHERRY. In 2018, Cooper issued "A Paranormal Evening At The Olympia Paris", a recording of his December 7, 2017 concert at the world-renowned Olympia venue in France. The effort captured Cooper and his current bandmates performing a choice selection of classic Cooper hits, in addition to some highlights from 2017's "Paranormal" album. Alice later said that he wanted to release a document of his band's onstage prowess because they "deserved a live album." 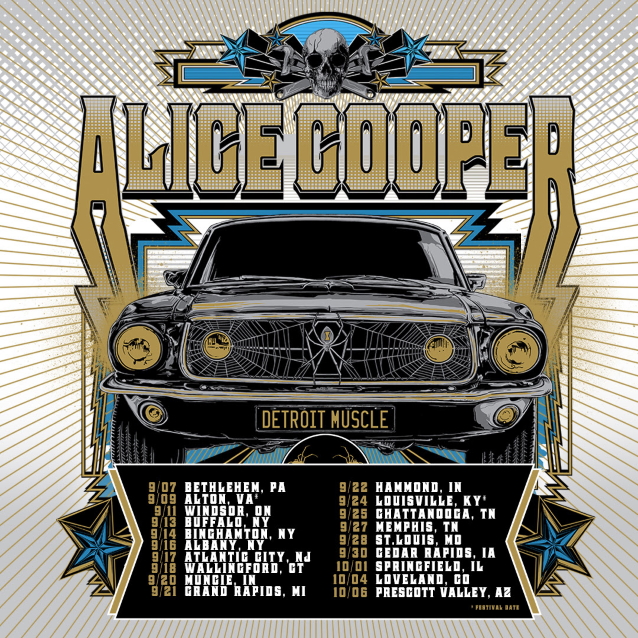