Atlanta’s experimental rap duo EarthGang: “We put our life up for sale. Why portray somebody else’s?”

Home Atlanta’s experimental rap duo EarthGang: “We put our life up for sale. Why portray somebody else’s?”
news 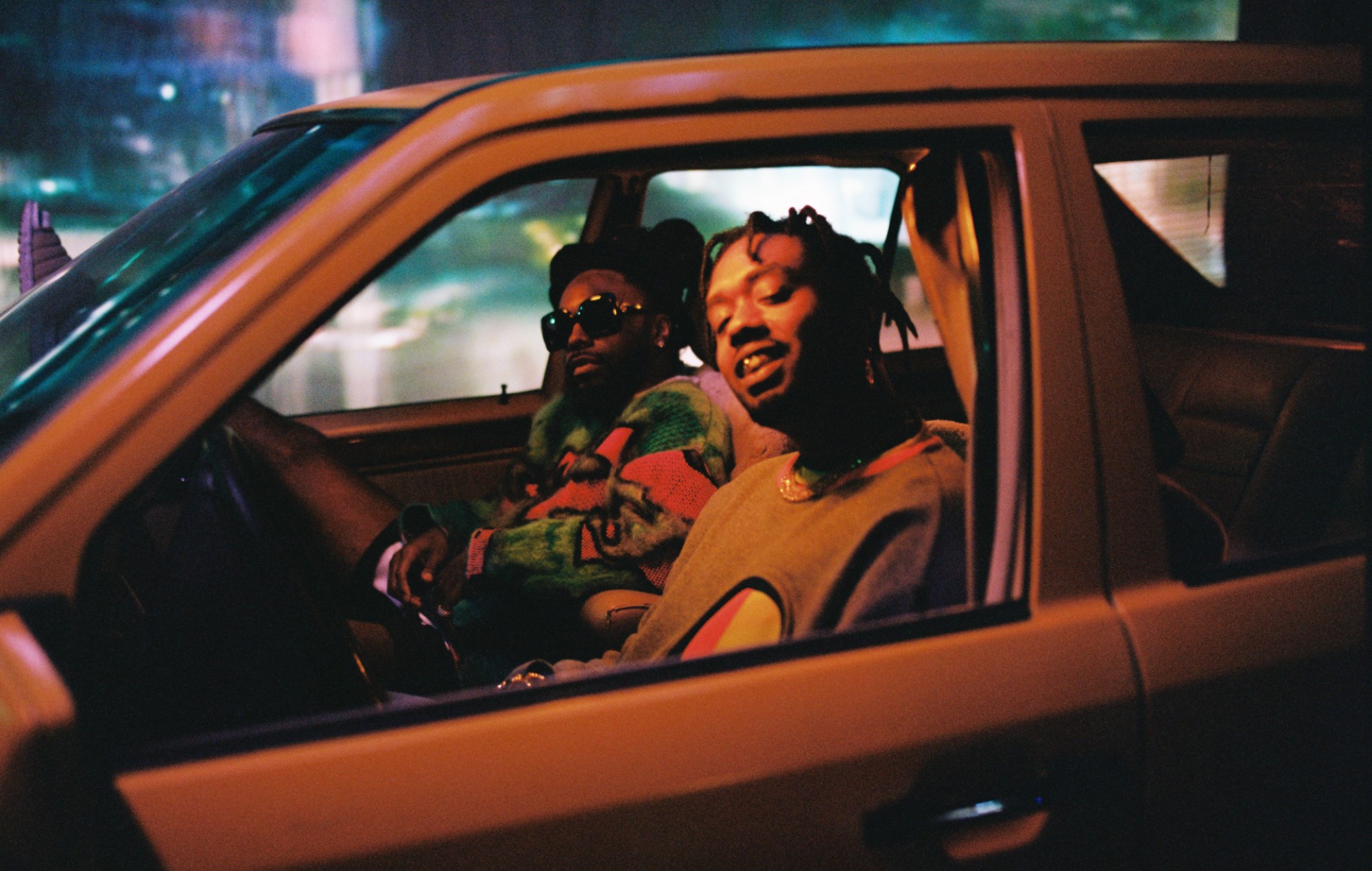 In a world full of outlandish and boisterous ringleaders trying to demand attention, Atlanta’s EarthGang are the laidback duo doing things their own way. Since meeting back in high school, Olu and WowGr8’s musical ambitions have slotted effortlessly together in a dog-eat-dog world. After releasing their first album ‘Shallow Graves For Toys’ back in 2013, a major label debut followed six years later with ‘Mirrorland’. Of course, in between all of this, EarthGang also released a trilogy of EPs called ‘Rags’, ‘Royalty’, and ‘Robots’. And now, after a series of pushbacks, the duo have just released their full-length follow-up ‘Ghetto Gods’. As the reserved Olu told the audience at a recent performance: “there was a Mercury and all these other retrogrades going on. We didn’t want to put it out with all that”.

Signed to the prolific J.Cole’s Dreamville Records, EarthGang sit among a roster of formidable lyricists. Like their Spillage Village bandmate J.I.D and Sudanese-American rapper Bas, they’re studious of both what came before, and what’s currently around them. The band’s second major label record ‘Ghetto Gods’ meanwhile is the epitome of Atlanta, showing off a heady blend of classic jazzy notes blended with the modern trap sounds birthed from their hometown.

As NME learns more about EarthGang’s style, new sounds, and evolution, the duo doodle enthusiastically while answering our questions, ever so slightly hungover from a monstrous London playback of ‘Ghetto Gods’.

How is it working alongside J.Cole at Dreamville Records, and seeing the legacy he’s built?

Olu: “It’s cool, you get to see a lot of things. You learn a lot, and you’re able to manoeuvre your cells and your career off of that. I think that’s the most important thing that we’ve been able to get from this partnership.”

You previously featured on the Dreamville compilation album ‘Revenge of The Dreamers III’ and the Tiana Major9-assisted ‘Collide’ – both were nominated at the 2020 Grammys. How does it feel to get that level of recognition after so much grafting?

Olu: “It’s so crazy because all that happened before the pandemic. It was like: we’re going up, going up, and then [motioning downwards] we went on this rollercoaster. It’s kind of crazy to see our accomplishments being applauded, because most of the time, we just keep our head down and continue working. We don’t think too much about accolades, awards and stuff like that. Our main thing is, are we making the best music that we can? Are we having the best times that we can have?”

You’re clearly very versatile: is that important in the rap world?

WowGr8: “I mean, it’s important. Any superpower could help out any superhero, but if you are really really good at your thing, that works, too. Like Megan Thee Stallion – she’s She-Hulk. She comes smashing through the wall every time, and every time she smashes through the wall, people clap. Versatility is our power but it doesn’t have to be everybody’s power.”

How much do you value authenticity?

Olu: “That’s true. Your image, your story; that’s all you got. We put our life up for sale; why portray somebody else’s life? Everything sprouts from there.”

Do you feel like people want to listen to bars anymore? Do people still care about what artists have to say?

Olu: “People care about the impact of what you’ve got to say. I don’t like to listen to people who say too many things all the time. Some of my favourite songs have eight lines. It’s all about the image and the emotions.”

WowGr8: “If your mind is only thinking, ‘I’m going to deliver bars!’ then you’ve already lost, bro. This shit is supposed to feel like art. There are so many pockets of people. Out of all these billions of people, you only need a million to be good. And a million is such a small percentage of a billion. You can make a lot of little.”

‘Mirrorland’ was your first album signed to Dreamville, owned by Interscope. Did you view that album as a fresh start, a conclusion of the old EarthGang, or simply a continuation?

WowGr8: “It felt like the closing of a chapter and the start of a new one, at the time. It was our first time going through those loops; [sample] clearances, [working with] Interscope [who own Dreamville], blah, blah, blah. At the same time, if you look at the cover of that project, it’s a combination of at least the past three or four [EP] covers [we’ve released]. So the point was to say [‘Mirrorland’] is everything we’ve been working on, for this moment here.”

How does ‘Ghetto Gods’ differ?

WowGr8: “‘Mirrorland’ was more cartoony, a wacky ride. It was based on the Wizard of Oz. ‘Ghetto Gods’ is more like an action movie.”

WowGr8: “This one’s a little more based in reality; right in the face.”

Listening to ‘Ghetto Gods’, it feels like the epitome of Atlanta sonically, with the trap sound and Southern twang…

WowGr8: “That’s beautiful to hear considering we really from Atlanta. A lot of artists claim Atlanta but are not.”

How do you view Atlanta’s rich music scene?

WowGr8: “It’s so ingrained in the culture; my whole life Atlanta has been running hip-hop. You can’t tell me that anybody else ran hip-hop. You can’t tell me New York ran hip-hop and I know they did: they started it. Coming up, I was listening to [Bankhead rapper] Kilo Ali as a kid. I been listening to [East Point duo] OutKast as a child, so I never thought about it. It’s what the norm is.”

How do you feel about comparisons to OutKast? Is it scary to fill those boots?

WowGr8: “People say what they want to say. People called Kobe [Bryant] the next Michael Jordan before they just called him Kobe.”

Olu: “You’ve got to forge your own path. Those people who say that listen to music to form their own opinions.”

WowGr8: “At first they compare you, then they revere you. You can’t worry about comparisons because they’re going to fade with the people saying them. It’s all generational because, growing up, I saw Kobe but I never really saw Jordan’s career. We know he’s the G.O.A.T. but we’ve never seen it. The next generation… I got a son – he’s four –and he’s going to grow up looking at my shit as old school shit. I appreciate it but we’re not like: ‘We gotta fill their shoes dawg!”. My momma never carried me for nine months to carry another n****a’s torch.”

Being a part of the hip-hop and soul collective Spillage Village must have been amazing, especially seeing the successes of 6lack, Mereba, J.I.D, and the rest of your friends?

WowGr8: “[While picking the members] I had a moment of clairvoyance. All of us did. Everybody in that circle was manifesting something bigger because everybody had the deepest passion for music. We didn’t link up on no clout shit. We all came together on the basis of ‘Damn, this sounds good’. That passion for music made us all know we were going to succeed. We all dive deeper into our craft, and the first priority is music.”

How important is collectivity and staying together?

Olu: “It’s super important. You have strength in numbers, and so much more power with people you can affect. Most of our fanbase has been created by us, but we also benefit from the collaborations we’ve got with everybody else. Just being able to bounce ideas and learn recording techniques from others, their writing process; you try to add that to your arsenal, learning different styles and different techniques. It makes everybody better.”

Olu: “Sleep! I’m going to buy some clothes, look very nice in a couple of days.”

WowGr8: “Yeah, that. An album’s on the way, we’re working on [the follow-up to ‘Ghetto Gods’] right now too. We gotta cook. Then a tour—”

WowGr8: “Yeah, you got to keep cooking up and giving the people what they want before they forget you.”

The post Atlanta’s experimental rap duo EarthGang: “We put our life up for sale. Why portray somebody else’s?” appeared first on NME.