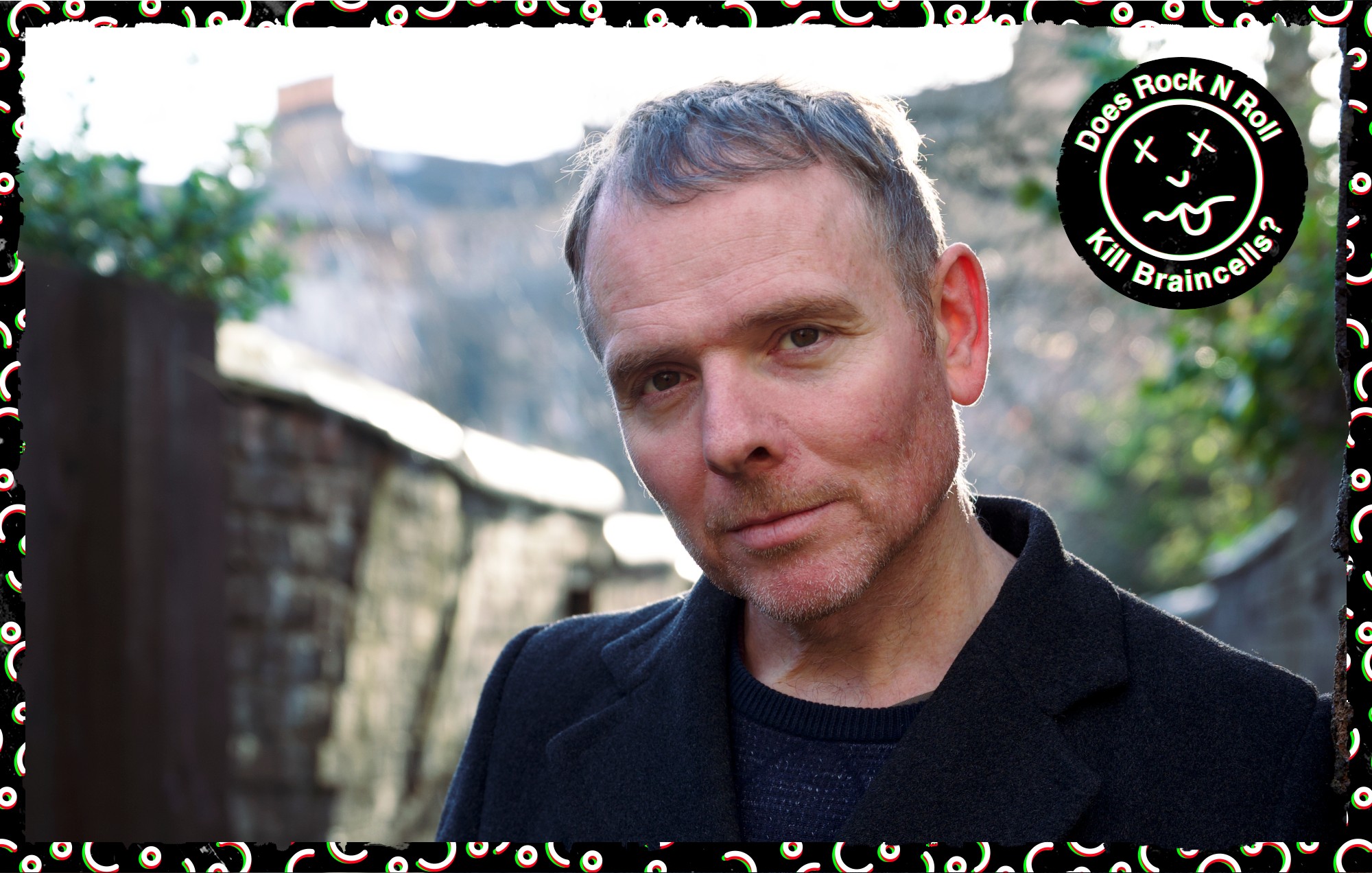 Who presented Belle and Sebastian with the Best Breakthrough Act award at the 1999 Brits?

CORRECT. Along with Fun Lovin’ Criminals’ Huey Morgan. At the time, Pete Waterman, the manager of Steps – who you beat – alleged you’d rigged the online vote and demanded a recount…

“We made our fans aware, but a recount seemed a bit ridiculous! (Laughs) We were on the front page of The Scottish Sun saying we’d cheated. We thought, these are serious allegations – are we going to get sued? Are the police going to come and get us? We were so naïve and didn’t know what the hell was happening. Then we opened the newspaper and they were talking about how we were all janitors and lived in the church hall and made our own yogurt and knitted our own cardigans. It was funny.

“I ended up chatting with Pete Waterman later. I was in the car listening to Dead or Alive’s ‘You Spin Me Round (Like a Record)’, one of the early hits he produced, and thought: ‘I’m going to reach out and say there’s no hard feelings’. He sent me a nice email back.”

Belle and Sebastian held their own festival, The Bowlie Weekender, at Pontin’s in Camber Sands in 1999. How much did tickets cost including weekend accommodation?

“(Laughs) Awww man! I thought I knew Bowlie inside out, but fuck me if I can remember the ticket price! £80?”

“Groovy! Bowlie felt new and genuinely exciting. We didn’t know until the last minute if it was going to work when we arrived by train and, as we got closer, more of the Bowlie kids got on and the regular people got off. I was constantly running between the stages and entertainment. It was general organisational chaos that lasted until the end of the night and then the regular festival chaos started where everybody was in each other’s chalets and people were drunk. There was no partition between the bands and punters, so it was parties and people popping up in your bedroom all the time.”

“I didn’t catch it, but was  it the belly-flop competition?”

“That was fun. People got into its vibe. Sarah [Martin, violinist and vocalist in the band] couldn’t wait for the wine tasting with Yo La Tengo because those guys have a good palette. Everyone chipped in with their specialities. Frances [McKee] from The Vaselines is a yoga instructor, so they were asked to play partly on the strength of her yoga skills (Laughs).”

Was anyone tempted to step up with some nautical-themed covers?

“Oh yeah. The kids had their own little School of Rock choir where we taught them one of our songs ‘Legal Man’ and on our last gig, they came onstage and sang with us. But they were also meant to learn The Beach Boys’ ‘Sloop John B.’ because the lyrics ‘This is the worst trip I’ve ever been on’ would be funny, but they were too young to grasp it. There were a few salty sea dog covers going on.  I was hoping somebody would do Sex Pistols’ ‘Friggin’ in the Riggin’!

“Fans had been asking for it. When COVID-19 started, instead of going into the studio to start recording a new album, it seemed like the ideal time to assemble a live record.”

In 2015, what did stage-invading actor Jon Hamm put in your mouth during Belle and Sebastian’s Bonnaroo Festival set in Tennessee?

“I have a vague recollection it was a jelly baby? Or sweetie of some description?”

CORRECT. He fed you Gummy Bears.

“I was standing with him and Zach Galifianakis watching a band and they said: ‘OK, we’re coming over to watch you guys next’. The next thing I knew, they were watching us and the two Sarahs were knock-kneed (Laughs) – they were in absolute puddles. They act cool until someone like Jon Hamm is around and then they hide behind you like children and can’t speak.”

Who’s been the most unexpected person who has turned out to be a Belle and Sebastian fan?

“I’m never there to see them! What usually happens after a show is I’m knackered and sweaty so will grab a shower, and I’ll come out of the dressing room and our tour manager will say: ‘Anne Hathaway was here. She’s lovely.’ I’m like: ‘Why didn’t you tell me?!’ Mike Myers from Wayne’s World always comes to see us when we play Chicago.”

Taking of big-name fans, you recently had a Twitter exchange with Brazilian pop megastar Anitta, who wants to write with you. Reckon you’ll end up collaborating?

“The door’s open. If we could do something with Anitta, we will. Now we’ve got our studio going, it’s nice to feel we can accommodate other singers and voices. People maybe wouldn’t think of Belle and Sebastian being this production team or backing band for modern singers, but maybe it’s something we just need to do once and well and then people will realise we can still write a tune.”

In the 2000 film High Fidelity, what does Jack Black’s character describe Belle and Sebastian’s music as?

“I saw this movie in America when it came out. Sad Bastard Music?”

(Cheers) “Yeah! Sad Bastards! That’s us! (Laughs) Our music’s been in a few different films, but even with that so-called putdown, it’s still one of the best uses of our music and a great movie. We’ve had a few memorable insults about our music – I got some of them printed on T-shirts.”

What character is emblazoned on the T-shirt you’re wearing on Belle and Sebastian’s Top of the Pops’ performance of ‘Legal Man’?

“(Laughs) “It  sounds narcissistic that I remember this, but it was Dennis the Menace T-shirt I bought from a Cobbler’s on Ayr High Street.”

CORRECT. You had a ‘stage invader’ in a gorilla suit during the performance…

“That was our esteemed sound engineer and producer Tony Doogan, who’d come down to keep an eye on the sound. As it was dubbed and we were miming, there was no reason for him to be there, so we suggested he dress up. He went and got the options of a pirate and gorilla costume and we said, ‘Wear both!’.

Afterwards, it was reported that you were nearly arrested after breaking into the EastEnders set…

“(Laughs) There were a few disgraceful scenes around that time. I don’t think people should have to defend rock‘n’roll behaviour – especially us! Because it was such a rarity and we rarely got out of Glasgow and everyone was in high spirits and blutered [drunk], and we ended up in the Queen Vic and on a fake prop bus, and we got chased out of there. One of the [Top of the Pops] presenters, Jamie Theakston, had to vouch for us and get us our shame-faced from the security officer.”

At the launch party of your debut album ‘Tigermilk’ in 1996, what did guests use copies of the record as?

“Frisbees? They were pinged around during some drunken behaviour!”

CORRECT. In the early days, record label bosses warned you that the band name was “too gay”. Did that kind of resistance surprise you?

“Without wanting to sound dramatic, my whole life was based on that resistance! I had been used to it for the past seven years, coming from my background, and it felt like a vague extension of not so much prejudice, but just a different way of seeing things. I was ready for it. It drove people nuts when we used to say no to things – like doing any press. They couldn’t stand it! They couldn’t understand that I was saying no because there’s a better way of doing things.”

What was the biggest thing you said no to?

“My wife still reminds me that we turned down Shrek. We were party poopers to the point where we didn’t want to be involved in film soundtracks. We didn’t want our songs being used inappropriately, so when they gave us this script about this large green cartoon monster, I turned it down. They wanted us to write for it and be part of the whole thing.  Another time, we would have done it.”

What chart number did Belle and Sebastian’s single ‘Jonathan David’ reach in the Canadian sales charts?

“I’ll have to remember to play ‘Jonathan David’ every time we’re in Canada!”

Singer Olly Alexander starred in God Help The Girl, the 2014 film you wrote and directed. But what was his band Years & Years’ first Top 40 single?

“During filming, Olly was caught in two minds between acting and singing, and said his manager wanted him to focus on music after the film. I said to him: ‘Why can’t you do both? You’re a triple threat.’ I looked at hundreds of guys for the role of James, and they all had to sing something – most were better guitar players and singers then I was. But as soon as I saw Olly on tape, he was perfect. He was standing behind this crap keyboard and said: ‘I’m just going to sing one of my own songs if that’s alright?’.”

Any other film ideas in the pipeline?

“I’m working on an autobiographical novel from the time before the band were together. The band got together around 1996, so I’m writing about the years from ’91 to ’93 at the minute. I’ve never written a whole novel, so I’m enjoying it. The subject came up about doing a full-length Belle and Sebastian documentary but when the opportunity to make what I would think of as a movie comes up, my mind immediately goes to fiction. I think the band has a good story, but I think it’s something that would be better turned into fiction. Saying that, you could do it as a biopic – I’d like to sit down and work with a team of scriptwriters if I were to do that.”

“Just someone younger and better looking! (Laughs) It would be fun if a female could play me.”

Which often-repeated US sitcom featured a plot involving Belle and Sebastian’s song ‘We Rule The School’ and album ‘Tigermilk’ in 2005?

“I’ve seen the clip and I think it’s where a guy wants to get back with a girl, and Belle and Sebastian are her favourite band, then it turns out to be a mistake. I don’t know what the show’s called, though!”

WRONG. It’s How I Met Your Mother. Has your music cropped up anywhere strange?

“We’ve never had the misfortune of having our music played at a Trump rally or – thank God! – used to torture ISIS prisoners. My mum’s a fan of Ian Rankin and gets very excited every time our name’s mentioned in Rebus. Early on, when we were doing sessions at Radio 1 for Mark and Lard, he would say: ‘Can they not give you a job? Can you not try and get your foot in the door of the BBC?’. He didn’t think the band would last until three years in when he saw a photo of a Belle and Sebastian-themed pub in Seoul, South Korea (Laughs).”