EVERCLEAR has announced the return of its "Summerland" tour in 2021, featuring fellow noted rock acts LIVING COLOUR, HOOBASTANK and WHEATUS. Kicking off this July, the tour will make its way through cities such as Atlantic City, Houston, Cincinnati and Fort Wayne, to name a few, and will eventually extend through September and early October as COVID-19 mandates are lifted and more dates are added. Tickets go on sale this Friday, May 7 at 10 a.m. local. "After personally fighting COVID-19 for two months and managing the lingering symptoms, I'm so grateful that the numbers are going down, the vaccines are going up, and that we're getting the chance to tour the U.S. again. I couldn't be more proud of this year's lineup of legendary alternative bands," says EVERCLEAR frontman and "Summerland" tour founder Art Alexakis. "LIVING COLOUR, HOOBASTANK and WHEATUS have always been personal favorites of mine and I am so excited to share the stage with them this summer. I speak for the whole tour when I say we're absolutely thrilled and grateful to get back out on the road and perform live again for our fans, friends, and family." On a similar note, the members of HOOBASTANK say: "After the tough and unprecedented year that everyone has gone through, we couldn't be more excited to get out on the road again to play some live shows. It's been way too long and we're so eager and ready to see everyone's faces once again. Throw in the fact it's with some great bands that we have been big fans of for years and it makes it all the more special." Likewise, WHEATUS frontman Brendan Brown encourages fans to get vaccinated, stating: "If dreams come true this would be it for us, getting back out on tour, safely, with artists we've looked up to for decades... Everyone, please get your vaccinations so we can all get our summer back, together." Created in 2012 by Alexakis, the "Summerland" tour has become a summer tour favorite of fans and critics alike, with Rolling Stone naming it one of the "10 Hottest Summer Package Tours." With EVERCLEAR as its recurring headliner, past "Summerland" lineups have featured notable alternative rock bands such as SUGAR RAY, LIT, MARCY PLAYGROUND, SOUL ASYLUM, EVE 6, LOCAL H, SPACE HOG, GIN BLOSSOMS, LIVE, FUEL, AMERICAN HIFI, THE TOADIES and FILTER, making it a go-to tour for fans of 1990s nostalgia. As part of this year's tour, LIVING COLOUR and HOOBASTANK will be alternating slots in the lineup. "Summerland" 2021 tour dates: Jul. 02 - Middletown, NY - Orange County Speedway Jul. 03 - Atlantic City, NJ - Orange Loop Arena Jul. 08 - Houston, TX - Arena Theatre Jul. 09 - Fort Worth, TX - Billy Bob's Texas Jul. 11 - Cedar Park, TX - H-E-B Center Jul. 15 - Cincinnati, OH - Riverfront Live Jul. 16 - Terre Haute, IN - The Mill Jul. 17 - Fort Wayne, IN - Piere's Jul. 22 - Southaven, MS - Landers Center Jul. 23 - Black Mountain, NC - Silverados Jul. 24 - Dothan, AL - The Plant Jul. 28 - Evansville, IN - Victory Theatre Jul. 30 - Huntsville, AL - Von Braun Center Back Lot Jul. 31 - Murfreesboro, TN - Hop Springs Sep. 25 - Omaha, NE - Barnato on the Block Festival More dates will be announced. 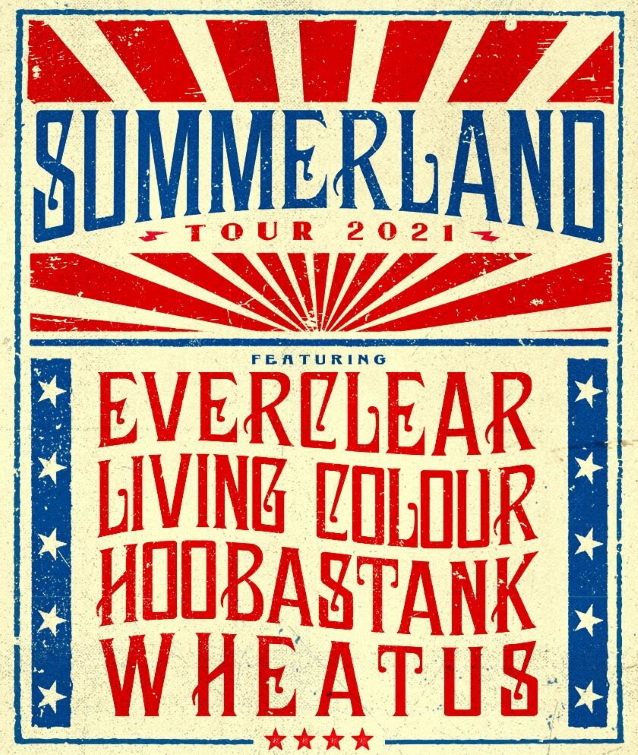