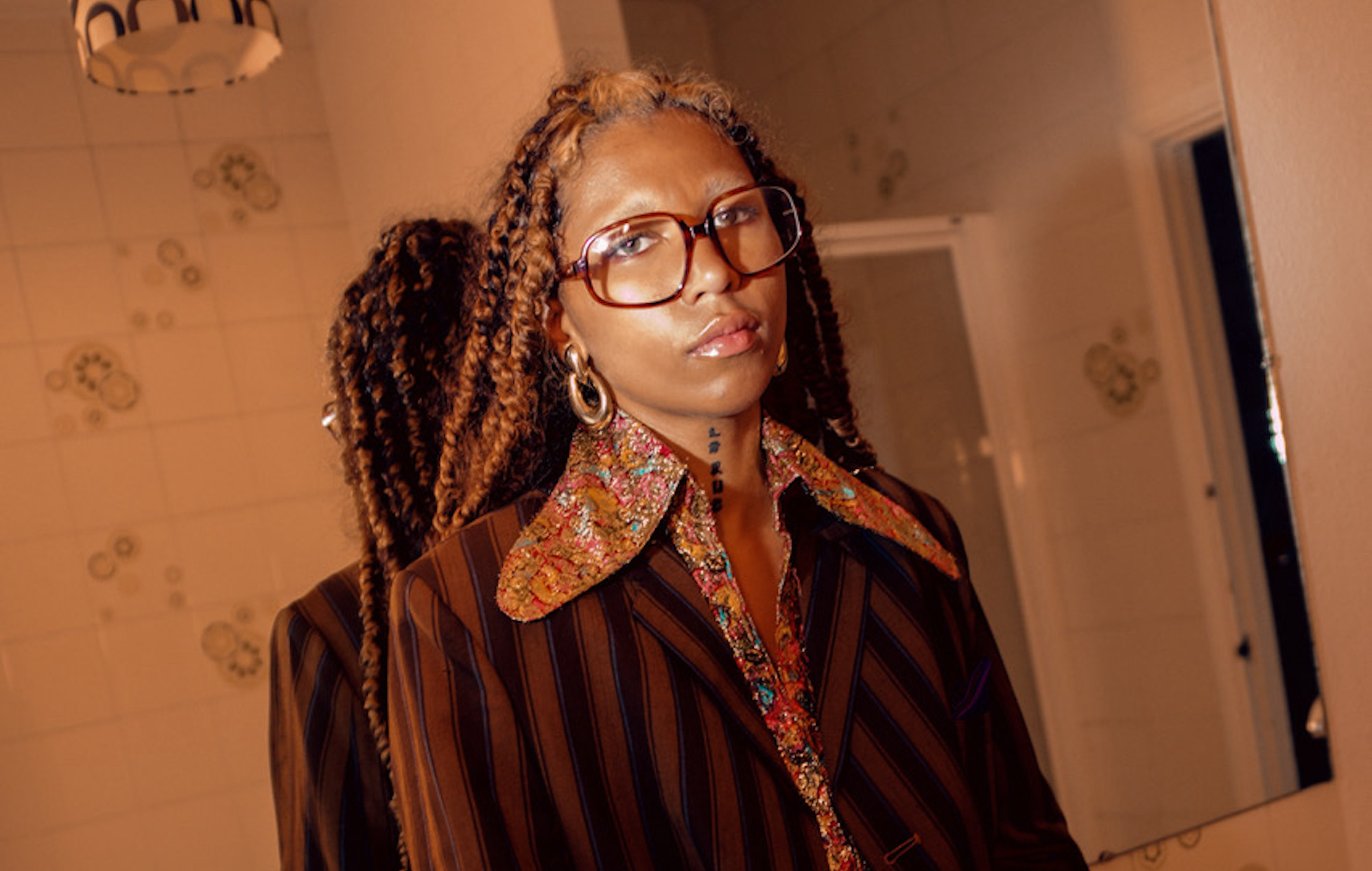 Whether it’s their masterful way with words or their effortless skill for creating catchy melodies, every time you hear Lava La Rue you can’t help but be enchanted by their talent.

Since the artist – real name Ava Laurel – emerged with their distinctive DIY sound on debut mixtape ‘Stitches’, they’ve proven their world-building skills by expanding Lavaland (the name of their multifaceted creative world) to a host of other outputs. From directing their own music videos – as well as some for pals like Wet Leg – to releasing their own fashion line, La Rue is one avant-garde, awe-inspiring creative.

They’re now gearing up to release next EP ‘Hi-Fidelity, teasing its release with the progressive and funky single of the same name. While originally the ever-evolving polymath was creating “lo-fi beats in a bedroom” as well as releasing music with their friends in eclectic arts collective NiNE8; after taking some time out to reconfigure their sound, the bouncy bedroom rap that once was La Rue’s go-to is no more.

In recent years, the Notting Hill artist has picked up their trusty axe, delivering psychedelia as they switch 808s for earthy guitar bellows. It was a natural change, they explain chatting to NME in a studio in East London, as: “before [I] was La Rue as an artist, I was playing bass in a load of bands”. This new project sees them embracing their past self, shifting to more organic sounds.

Ahead of the project’s release La Rue joins NME for the latest in our In Conversation series, to discuss how the new sonic world of their upcoming EP, working with Wet Leg and the process of creating their queer anthem ‘Vest and Boxers’. Here’s what we learned.

The title of La Rue’s next EP ‘Hi-Fidelity’ has several meanings. Firstly, it refers to their shift in sound from “making lo-fi beats in a bedroom” to now embracing guitar-heavy sonics and playing with a band. “But also, there’s a lot of sexy songs on it and a lot of queer songs,” they explain, adding that the title is also a play on words: “‘Hi-Fidelity’ makes me think of infidelity.”

Recent single ‘Vest & Boxers’ was the first introduction to this new world, and La Rue calls the track “a solidified, certified queer anthem.”

“Historically, a lot of songs that are considered queer anthems weren’t necessarily made by queer people…but it’s something where it’s like, ‘This speaks to me and gives me a sense of pride in who I am’,” La Rue says. “A lot of queer people had to reclaim songs that people would be like, ‘Well that’s a straight narrative’, but they reclaimed it for themselves.”

La Rue cites the lack of representation in the mainstream music industry for this, but adds: “A lot of the greatest musicians of all time were queer, but maybe were afraid to go down that narrative too much because they wanted their music to be respected on the whole spectrum, rather than just boxed in as ‘oh you’re a queer person, so we’re only ever going to sell your music to a queer demographic’”.

With ‘Vest & Boxers’ they wanted to create a tune that was specific to their community. The jubilant track, with its jumpy bassline and playful riffs, refers to the clothes they wear when going out to “let the gyally know what’s up” when trying to find love in the club. La Rue explains: “I wanted to make a tune that was a homage to that [experience].”

La Rue is no stranger to creating their own visuals, and they’ve recently expanded their artistic output by directing the tongue-in-cheek music video for rising indie duo Wet Leg’s ‘Ur Mum’. For La Rue, extending their Lavaland world like this is a glimpse into the potential they have to be one of the biggest world builders out of the UK.

Explaining that they directed the music video while finishing upcoming project ‘Hi-Fidelity’, La Rue says: “it felt like I was living a double life, because [in the] daytime I’d be in these colour grade sessions, or even before [we made the video] speaking to the director of photography or the set designer. And then by nighttime I’d be in the studio wrapping up the mixes of songs.”

This creative direction is something they’d love to do more of. “I [get to] refresh my mind [by] constantly [being] creative and creating this sort of universe, visually, for myself or for other people. Overall, I think the thing with being a director is that, because it’s not my main bread and butter…I only really work on songs that I really love or with artists that I’m really passionate about… that’s an amazing thing.”

‘Hi-Fidelity’ embraces the sounds of their past

On La Rue’s recent tracks there’s been a noticeable shift between the old and new La Rue sound. On tracks like 2019’s ‘MOSCHINO IN 83’ featuring South London rapper Virgil Hawkins there was a computerised whimsicality to La Rue’s bedroom rap sound. Back then, they would play around with their sampler, making laidback beats for their trippy, understated flows; but their new sonics — full of stonking bass and chirpy ska-inflected melodies – are: “actually me going back to a lot of what I was listening to growing up.”

They explain that when they first started making music, it was with people who were: “in thrash metal bands, or skaters who would equally listen to hip-hop as they would listen to pop-punk, so we always had that fusion.” In fact, they add, their first ever show played as La Rue was in support of alternative, heavier bands.

They add: “That world of hip-hop and alternative, in my opinion, always went well together… I think when I started [being] Lava, because of the resources that I had at that time, it was a lot easier to go and make a hip-hop beat, or a bedroom-type, sort of alternative R&B beat.

The alternative music scene is changing for the better

In recent years the indie and alternative music scene has begun to open up, with a diverse set of rising superstars rocking out like some of the original rock and roll-ers of yesteryear. However, for the past few decades this hasn’t always been the case, and it was hard for La Rue to see someone like themselves enjoying this music without scrutiny.

“Growing up when I was in school, I was weird because I listened to bands like Paramore and Bring Me the Horizon and You Me At Six, just a load of indie bands, because as a Caribbean people are like: ‘but that’s white people music’” they explain.

“I was always like: ‘No, look at the first rockstars, whether it was Jimi Hendrix, or Chuck Berry, or Prince!’ These rockstar icons are Black people; but at that time, in the 2000s, it was quite a white-dominated scene. Whereas now, you’ve got more of that shift where we’re seeing a lot more POC people approach alternative and heavy music and have an alternative look”.

Alongside their own solo music, La Rue is part of collective NiNE8. The eclectic group, which also features Biig Piig, Mac Wetha and LorenzoRSV among others, gives them a chance to flex less frequently used musical muscles, utilising sounds they might not use on their own projects.

“I think I’ve definitely moved a bit away from a lot of the barring, like hip hop or trap that I used to… [now] it’s a lot more so [about] musicality and guitar-based music, but I can always hop on… a NiNE8 track if [you] want to hear me bar.”

“It is a bit like The Avengers,” La Rue says of NiNE8. “Each superhero has their own individual origin story, and everyone will have a hero whom they may relate to…but when [we] come together, it’s like a big superhero movie together. That’s when we do group mixtapes, group projects. Everyone has incredible solo projects, but when we come together… it makes [me] make something that is totally out of [my] comfort zone.”

However, La Rue hastily reminds us that, although NiNE8 might have risen together: “we’re not a boy band, so…there’s no conversation of like, ‘Oh, what if one of you goes solo?’ because we were all solo to begin with.”

The post Five things we learned from our In Conversation video chat with Lava La Rue appeared first on NME.