One of heavy metal's all-time greats, JUDAS PRIEST will celebrate its 50th anniversary this year with a world tour coming to the U.S. in the fall. The "50 Heavy Metal Years Tour" will also feature SABATON as openers and is being fueled by the highest-charting album of PRIEST's career, "Firepower", which peaked at No. 5 on the Billboard 200. "JUDAS PRIEST are primed and ready to deliver the goods with our '50 Heavy Metal Years' anniversary celebration stage show spectacular," the band said in a statement. "Performing a blistering cross section of songs from our lives in metal — we can't wait to raise horns with you again at this once-in-a-metal-lifetime event." Confirmed tour dates: Sep. 09 - Oxon Hill, MD @ MGM National Harbor Sep. 11 - Uniondale, NY @ Nassau Coliseum Sep. 12 - Ledyard, CT @ Foxwoods Casino Arena Sep. 14 - Philadelphia, PA @ The Mann Center Sep. 15 - Newark, NJ @ Prudential Center Sep. 17 - Charlotte, NC @ PNC Music Pavilion Sep. 18 - Orlando, FL @ Central Florida Fair - Rebel Rock Fest Sep. 21 - Grand Rapids, MI @ Van Andel Arena Sep. 23 - Detroit, MI @ Fox Theatre Sep. 24 - Youngstown, OH @ Covelli Centre Sep. 26 - Chicago, IL @ Rosemont Theatre Sep. 27 - Minneapolis, MN @ The Armory Sep. 29 - Milwaukee, WI @ Miller High Life Theatre Sep. 30 - St. Louis, MO @ Saint Louis Music Park Oct. 02 - Oklahoma City, OK @ The Zoo Amphitheatre Oct. 03 - Dallas, TX @ Pavilion at Toyota Music Factory Oct. 05 - Austin, TX @ HEB Center Oct. 06 - San Antonio, TX @Freeman Coliseum Oct. 08 - Albuquerque, NM @ Resort and Casino Oct. 09 - Denver, CO @ The Mission Ballroom Oct. 11 - Salt Lake City, UT @ Vivint Smart Home Arena Oct. 13 - Phoenix, AZ @ Arizona Federal Theatre Oct. 15 - Los Angeles, CA @ Microsoft Theater Oct. 17 - Las Vegas, NV @ Zappos Theatre at Planet Hollywood JUDAS PRIEST members Rob Halford, Glenn Tipton and Richie Faulkner recently commenced the official songwriting sessions for the band's follow-up to "Firepower" album. Released in March 2018, "Firepower" was the second LP to feature the 40-year-old Faulkner, who was selected to fill the void left by founding guitarist K.K. Downing following his exit in 2011. Last month, Faulkner said that he had "a ton of ideas" for PRIEST's next disc. He added: "We just have to get together and see what metal magic we can create" "Firepower" entered the Billboard 200 chart at position No. 5, making it PRIEST's highest-charting album ever. "Redeemer Of Souls" debuted and peaked at No. 6, while 2008's "Nostradamus" landed at No. 11 and 2005's "Angel Of Retribution" came in at No. 13. "Firepower" moved 49,000 equivalent album units in first week of release. Of that sum, 48,000 were in traditional album sales, just shy of the 54,000 copies sold by "Angel Of Retribution" in that album's first week. The "Firepower" chart position was bolstered by sales generated from a concert ticket/album sale redemption offer in association with the band's spring 2018 North American tour. Across the pond, "Firepower" landed at position No. 5 on the U.K. album chart. It marked the band's highest ranking, and first time in the Top 10, since "British Steel" reached No. 4 in 1980. Elsewhere, "Firepower" also became PRIEST's first-ever No. 1 in Sweden. "Firepower" was recorded by British producer Andy Sneap, the band's longtime collaborator Tom Allom and engineer Mike Exeter (BLACK SABBATH). The cover artwork for "Firepower" was created by the Chilean/Italian artist Claudio Bergamin. Halford recently told Goldmine that PRIEST "had one of the strongest experiences ever with the 'Firepower' record." He explained: "Just when you think you've not exactly done it all, seen it all and had it all, you go into the studio with this great producer combination that we've never known, and the great music that Richie brought into the mix after he first kind of embedded himself and grown during 'Redeemer Of Souls'. By the time we were at 'Firepower', it really jelled and he knew what he needed to do. 'Redeemer' was still a process of discovery for him. With 'Firepower', he was more attuned and acclimatized to it." Rob continued: "The general attitude and atmosphere was a bit like how we went in to making 'Painkiller', which was an important record to make for lots of reasons. The way that 'Painkiller' was able to really refine and define this band, I think we came to the same kind of place again with the music from 'Firepower'. And this far on, that was just a great, great time for the band — it's really lifted us in many ways. As a result, the prospect of making the follow-up to 'Firepower' is really intriguing. I haven't a clue where we're going to go with it, but as far as the opportunity in the sense of really wanting to make another strong, important record goes, you know, watch out — the PRIEST will definitely be back. [Laughs]" 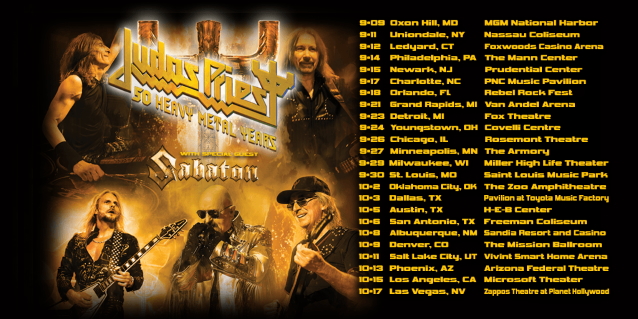 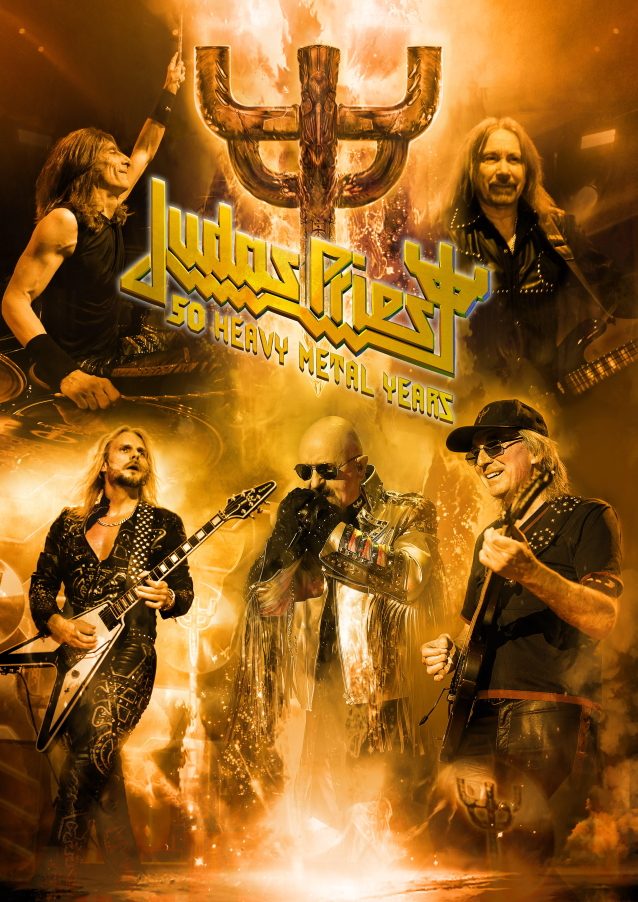