Portuguese metallers MOONSPELL will play a special Halloween live show in the South of Portugal, an ancient town named Beja, on October 31. At the local theatre Pax Julia, originally built in 1928, the band will deliver its annual and own brand of Halloween to the world: An exclusive live concert for 300 guests but that can be witnessed worldwide by the wolfpack, scattered and lying in wait for this to happen since the quarantine left all boats on shore. On October 31, Saturday, a full moon, with the show starting at 21:30 (PT/UK), 22:30 (Europe), 1:30 p.m. (PDT), 4:30 p.m. (NY/EDT), 5:30 p.m. (MX /CDT), 6:30 a.m. (November 1/GMT+9), 7.30 a.m. (November 1/GMT+10), MOONSPELL will put an amazing show, a dedicated production and the chance for you to watch live and comment. MOONSPELL recently played its first shows in Portugal since the world went on lockdown (see video below), and has seemingly proven Portugal is in the lead when it comes to organizing shows in these uncertain times. The band commented: "Under a beautiful Portuguese sky, we returned to our live performances. Congrats to the Wolfpack who, even with a mask and sitting down, took our wolfheart to tragic heights. Thanks also for being so civilized, observing the rules while enjoying the show. Without you, there’s no tomorrow. Kudos to the promoter, city hall and all the technicians and security. MOONSPELL is proud to be one of the bands playing live already! We feel blessed and lucky." The Beja show will be limited to 300 guests at the historic location of the theatre in Beja, but a streaming link will be available at the platform BOL afterwards for everyone who buys a ticket, can't watch it live or wants to watch it again. Grab your ticket, for the physical or digital live experience with MOONSPELL this Halloween via the following links: Virtual ticket: 5,30€ (inc TAX) https://www.bol.pt/Comprar/Bilhetes/90840-moonspell-sala_virtual_pax_julia/Sessoes Physical ticket (15€ inc TAX, limited to 300 tickets!) MOONSPELL recently parted ways with original drummer Miguel "Mike" Gaspar and replaced him with Hugo Ribeiro (no relation to MOONSPELL singer Fernando Ribeiro). The band will enter the studio in October to record its new album with producer Jaime Gomez Arellano (PARADISE LOST, ULVER, GHOST). An early 2021 release via Napalm Records is expected. MOONSPELL's latest release was the "Lisboa Under The Spell" live DVD/CD, which came out in August 2018 via Napalm Records. The live DVD/Blu-ray/3CD package captured MOONSPELL's performance before 4,000 fans at the sold-out Campo Pequeno arena in their hometown of Lisbon, Portugal on February 4, 2017. MOONSPELL's fourth album, 1999's "The Butterfly Effect", will be re-released on August 7 via Napalm Records. The reissue will include two new remixes, a completely re-designed cover and layout artwork, as well as an exclusive excerpt from the Butterfly FX chapter of the band's official biography, "Wolves Who Were Men". MOONSPELL's most recent studio album, "1755", came out in November 2017. The Portuguese-language disc was written about the 1755 Lisbon earthquake, also known as the Great Lisbon earthquake, which occurred in the Kingdom of Portugal. In combination with subsequent fires and a tsunami, the earthquake almost totally destroyed Lisbon and adjoining areas. Photo credit: Rui Vasco 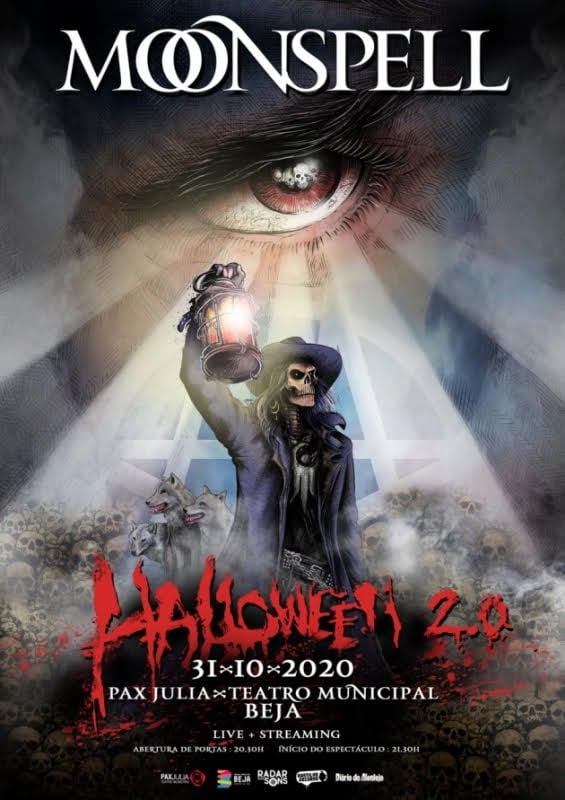