Piclavier is a Teharan based band. They officially started their career in 1393, the lyrics to their songs are English and French and they’re gonna release their first album soon.

1-How did you guys met and how did you form the band?

Mostafa: Shayan, Mehran and I have been friends since high school and we got lots of memories that one of them ended up in Piclavier. Meeting Mehran had a real fun story… so we were 4 friends. Farhad was our bass player but sadly he left the band but he was a founding member and one of our best friends. We did music and enjoyed it a lot and then decided to form a band and play rock music.

2-Who came up with “Piclavier” as the band name?

Mostafa: we were trying to come up with some title for the group during one of our jammings, and after lots of thinking and checking,all of us agreed on Piclavier as the band title.

3-Where do you get your ideas for composing?

Mostafa: usually, Mehran comes up with the ideas and the rest of us work on it and he’s also the lyricist of most of our songs. But recently Mahyar has written some real good material which we all dig and hope to write much better stuff together. also, not to be forgotten that Shayan usually takes care of all arrangings and stuff……

4-What was the best show you ever played?

Shayan: I think it’s different for each of us… for me, 2 of them were my favorite. Our first performance which was an underground show ( though we had the certificate for it) and people liked our show a lot that made us continue with the band more seriously and go for bigger shows,also the show at Azadi back in Ordibehesht of 1395 was hell of a fun.

Mahyar Salehi Nia: yeah, Azadi was my favorite one too.

Mostafa: We’ve never had a bad show, have we ? I liked them all!

4-Have you ever been in a real fight with the band?

Mostafa: How can you not ? but we always manage it somehow.

Mahyar : We are four guys with lots of ideas and different perspectives,but at the end of the day, one thing that keeps us all together is the fact that we are intimate friends

Shayan : Of course the are differences,and arguments at points but as Mostafa said we always somehow manage to get over them and keep our friendship.

5-Who do you think was the first rock musician in Iran ?

Shyan: As far as  I know,Kourosh Yaghmayi was so big back in those days,there were also bands who would do English songs.

7-Do you think technology is helping music or helping destroying it ?

Shayan : There’s no stopping it,is there ? I think it’s contributing.

8- can you tell us about your album? How long you’ve been working on it ? when is it coming out?

Mostafa: We’ve been focusing and working on our album since last 2 or 3 years and been trying to do our best.

Mahyar: We’re gonna release our album in summer,the thing is this is officially the first English/French album to be released in Iran which is very exciting and we’re really positive that it’d do great. 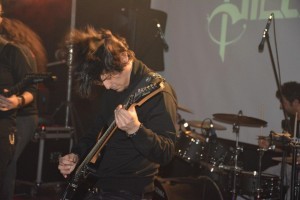 9-What is next for you once the album is out?

Mostafa : We’re planning to do shows,we’re actually talking about in now,trying to set the right times and places.