Anton, Ivo & Julian comprise Suburbian Rex – a Germany based rock trio. Founded in 2015. the band first focused on preparing a smashing live show and hit the stage in march 2016 for the first time. Since then they played about 100 gigs all across Germany and neighboring countries. After several festivals, their first tour and the release of the „Clockwork Universe“ EP, Suburbian Rex gained a lot of experience, professionalism and has now tasted blood for more.
Being somewhere indefinable between „Stoner Rock“, „Psychodelic Rock“ and „Classic Rock“ Suburbian Rex is an interesting live act for everyone that likes to flee from the unbearable mainstream pop (-rock).

We had an interview with Anton, Ivo & Julian. Go ahead and find out more about the trio…

1-Tell us about the band and how did you guys get together?

Rumor has it that the three of us have met each other long time ago in school, listening to the same music, having the same hobbies and sharing the opinion, that rock music seems to slowly die in peoples heads. I mean.. listen to todays popular music. No more words needed.

But in fact we all got brainwashed and reseted about 2,5 years ago.. we really can’t tell what happened before Suburbian Rex. All we know is that rock needs a proper revival in todays youth.. we don’t ask. We do.

2- What can you tell us about your first EP?

Well our first Demo EP is a five song EP with legendary bangers like „Last Gang in Town“ and „Pair of Dice“. But that one is definetly not worth talking about. (laughing)

We released our first real EP „Clockwork Universe“ in June 2016. It was more like a compilation of the songs we liked most. We still tried to put a certain feeling in it, we didn’t want to have it straight forward into the faces, which lead us to the decision to put some smooth and more personal songs like „Tell me your story“ or „Behind those walls“ on it. But all in all back than it was time to finally release something that shows people „Hey we are here. Get ready for some heavy shit“.

3-Have you ever looked into the audience and seen something funny that made you laugh?

That moment when there are more people on the stage, than in the crowd…

4-Do you listen to music from the middle east?

„System of a Down“ and of course „The Lemonoise“.

5-Any projects you are working on right now?

Right now we are working on our debut album which we are planning to release next year. Songwriting, demo – recording, cover – design (cheers to Arash Zarifian). Another project we are working on right now is called holiday. Holy shit, last two years were intense.. we need a breather.

6-How did you come up with the Band title?

Too many Weizen and crazy minds. Don’t judge us, we are German! 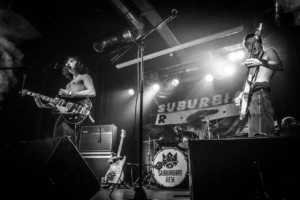 7-Which 3 songs should be your every road trip soundtrack?

8-What was the best show you’ve ever played?

Playing „Rockaue Festival 2017“. God damn.. rocking the smallest stage with tons of people in front of it. And they even became more during the gig. What would you say if women start running to your merch after your show?!

9-Any last words to say?

Thanks for taking the time to read this. Check us out on Spotify, Instagram, Facebook and everywhere you want. We love everyone who supports proper music. Don’t loose faith in rock, spread love, peace and harmony, take time for yourself and don’t let the modern society and stress enter your head till your gone. Be tolerant and be kind to unkind people. They need it most!

Thanks for the interview.